So, it's late spring.  With weather in the 90s it is more like summer.  I don't remember much "spring" this spring.  It was cold, then it was hot.  Lots has been happening in the garden, I just haven't shared lately!  My foot is still terribly sore, so my time in the garden has been very limited, mostly just watering.

PEAS: I tore them out tonight.  They were very disappointing this year.  Was it because I used a different brand of seed?  I plan to dig in some new compost and plant some in July for a fall harvest.  They were Cascadia, which can be picked as pods, like sugar snap peas, or left to mature for pod peas.  Last year I had enough pods to share with two different neighbors, and several large bowls full that my daughter and I sat shelling. This year the pods grew full too soon.  Many of them only held a single pea.  I planted more a few weeks later, in a different bed, but they didn't do well either.  I have four small bags of frozen pods left, and one small bag of peas.  I will plant Territorial Seed next time.  Maybe the weather got too hot, too soon for them?

BEANS: No good news on this front either. I have planted in the 4 x 4 "bean bed" three times, and have yet to have the plants I hoped for. A lot of them seem deformed too.  The ones in the recycled gate bed are better, but not much.  I see no insects, so can't figure out what's wrong. 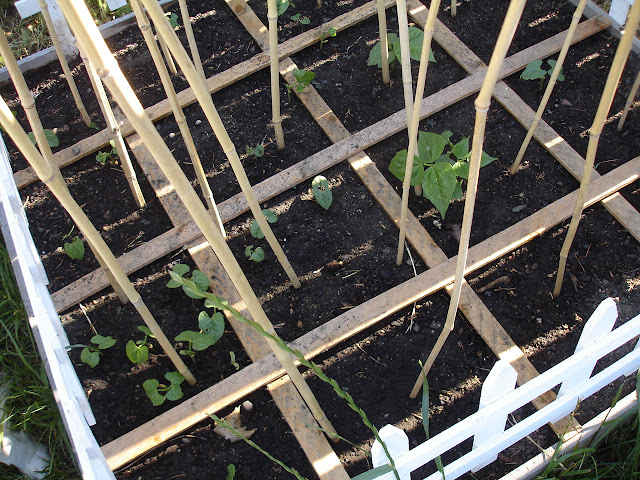 TOMATOES: Good ol' tomatoes, I can always depend on them!  I sure hope I can figure out how to can them!  Maybe I should get a dehydrator.  I think I will have tomatoes coming out my ears!  Even the Topsy Turvy tomato is doing well.


CUCUMBERS:  The lemon cucumbers I was worried about are taking off.  They are the ones that were leggy, so I buried most of their vines.  They are covered with blossoms and a few tiny cucumbers. 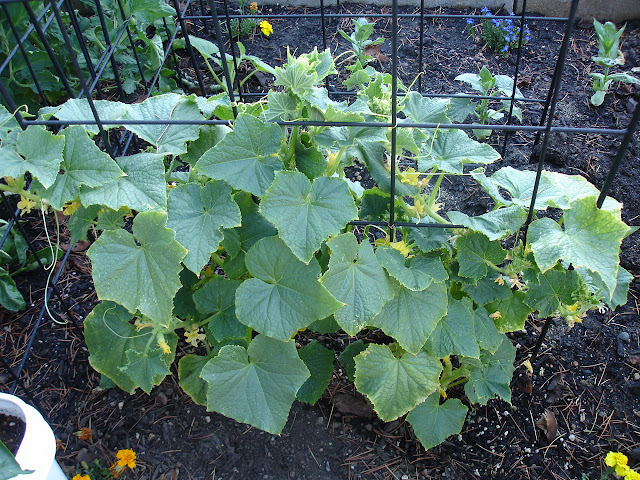 The gourds are doing well, not big enough to climb the wonderful trellis on the fence my son made.  The winter squash had to be resown.  So did pumpkins and watermelon.  My "grow in manure bag" idea is a bust.  Nothing has come up after planting twice.  I see it work online. I finally put some pumpkin seeds in a large container and they are up already.  The peppers are growing, and getting tiny blossoms, some of which I am pinching off.

STRAWBERRIES: Something is beating me to them.  Not birds.  Not slugs or snails.  I see pill and/or sow bugs, but the bait I put out isn't getting any.  I saw a few earwigs yesterday, but the bait is supposed to work on them too.  I haven't had the chance to trim off some of the runners yet, so the bed is a mess.  I did get one good harvest, as seen below. 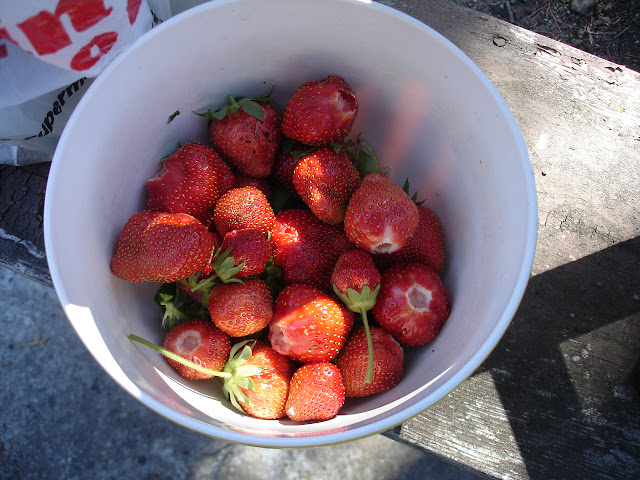 BLUEBERRIES: Looking good!  Draper berries are bigger, but Blue Crop plants look healthier.  I am quite pleased with the Blue Crop plants.  They are much nicer than I expected the to be since I got them "used" off Craiglist, and they originally came for Grocery Outlet. Not the sort of place I think of as quality plants, but my neighbor has a plum tree she got there, and it's loaded with fruit.