Wet Weather Brings Out... Fungi and a Happy Boo

It's been cold and damp and foggy.  Not days for the garden, or the gardener.
It's a good thing there's nothing pressing on the gardening front then!

Found some adorable little mushrooms in the grass.  By the time I got back to photograph them Edward had stumbled over them and broken them off.  An entire back yard to wander in, and he finds the tiny spot I want to preserve for five minutes!

Once it gets damp there are always little mushrooms growing.  The larger ones I pull out (actually lift out, they aren't exactly rooted in) to discard, never knowing if the dogs will taste test them.

They're cute (the dogs and the mushrooms, here I meant mushrooms), in the garden.
As for the dinner plate... no thanks! One of my few absolute do not eats.  Finding a stray piece on a take-out pizza may ruin my night!  Not only do they cook up looking like slugs, they taste like dirt.
What do I expect of fungi?

And, don't get me started on people who forage for their own.  They literally take their lives in their hands doing that.  Just last year, in the area I moved from, more than a dozen people in a group of mushroom hunters became ill, several (including a toddler) required liver transplants.  Once eaten, there is no antidote.
No thanks.
If I HAD to eat a mushroom, it would be from a major chain grocery store!
(And I ALWAYS wash my hands extra well after handling them!) 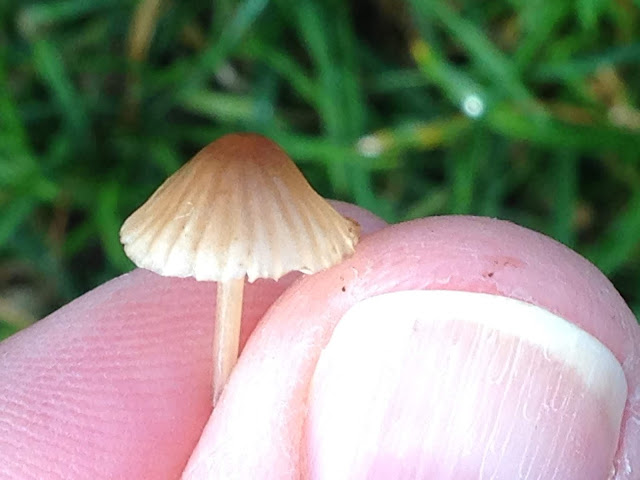 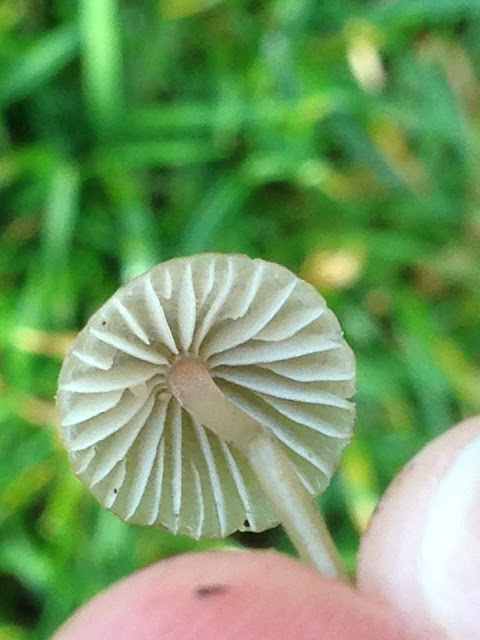 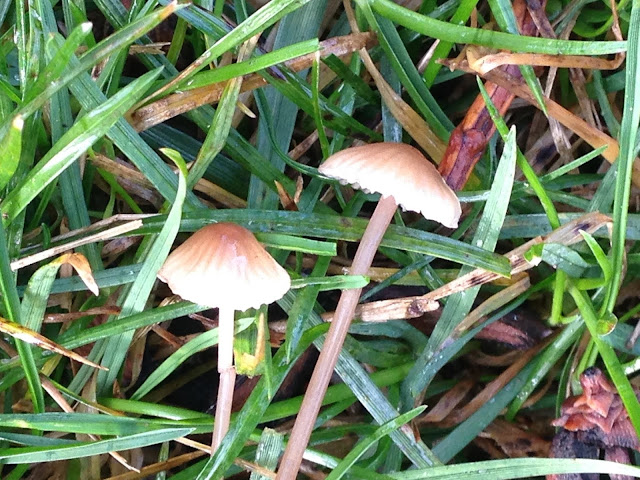 Ever see an adorable mushroom?  OK, those teeny tiny ones above were pretty cute, but really, how about Bird's Nest fungi? 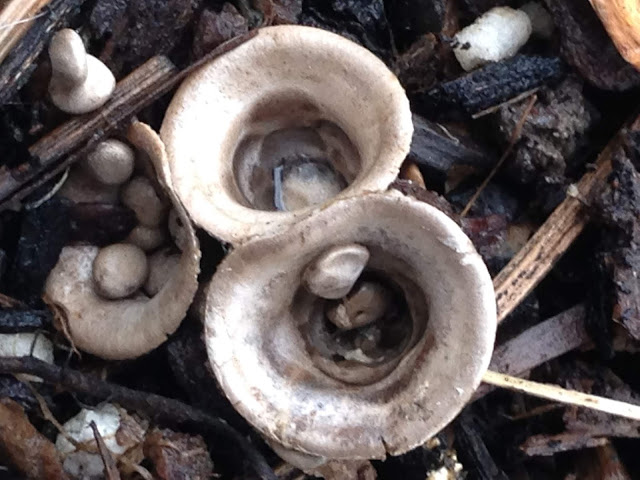 The "nests" or "cups" are the fruiting bodies of the fungus. The "eggs" are called "peridioles" and contain the spores (the reproductive bodies, like a plant's seeds). 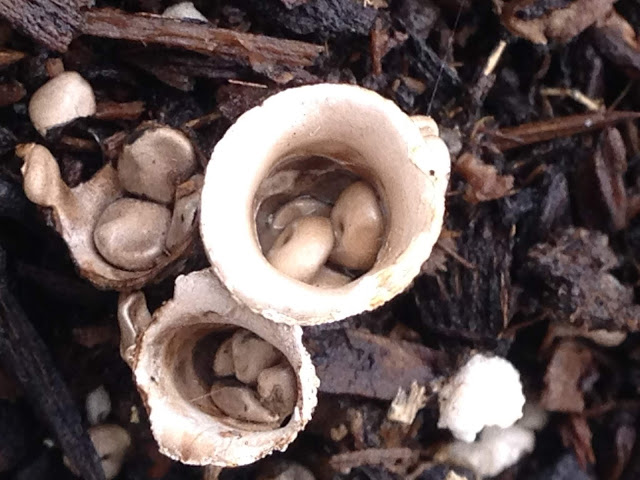 They love bark mulch and compost.  These are growing in the raised bed soil in the Butterfly Garden.
They are not harmful, but benefit the garden by decomposing woody tissue into rich, fertile soil.
Notice the "eggs" out of the "nests" and scattered on the soil. 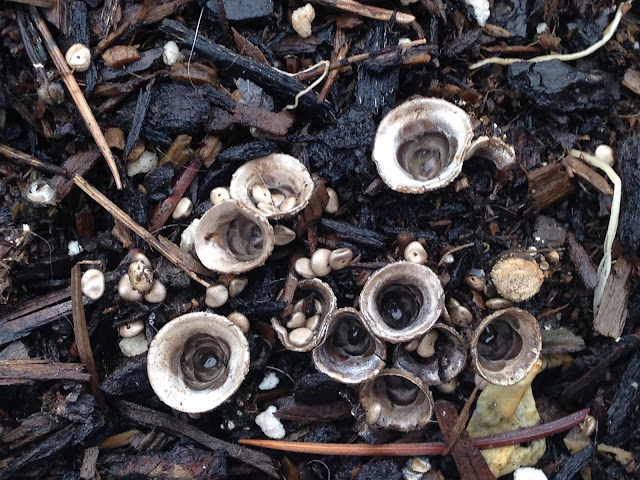 Below you can see an unopened "nest" on the right of the open and empty one in the lower section of the photo.  You can see where the "eggs" were positioned inside the "nests" too! 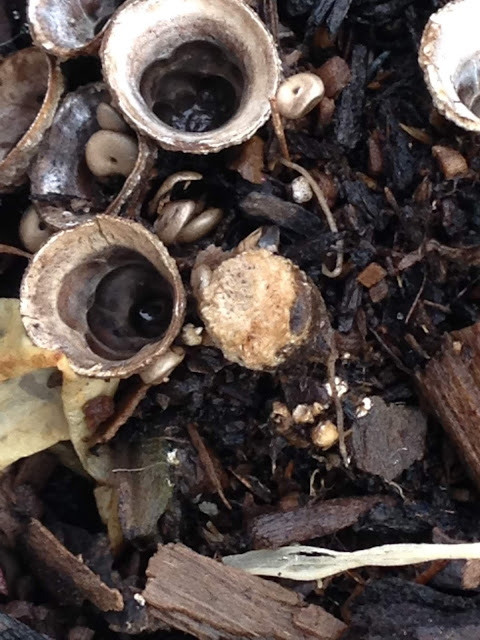 When it rains the "eggs" are splashed out of the "nests," as far as three or four feet away.  They "eggs" stick to surfaces (stems, houses, cars) and when dried release their spores. 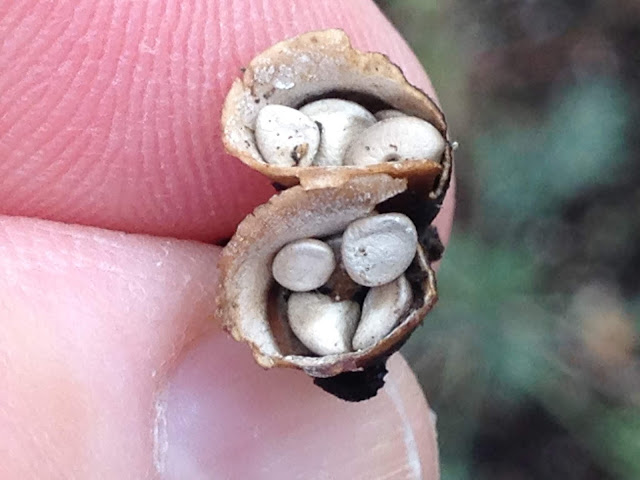 The ones below are growing on a small (see how big my thumb is?) piece of bark. 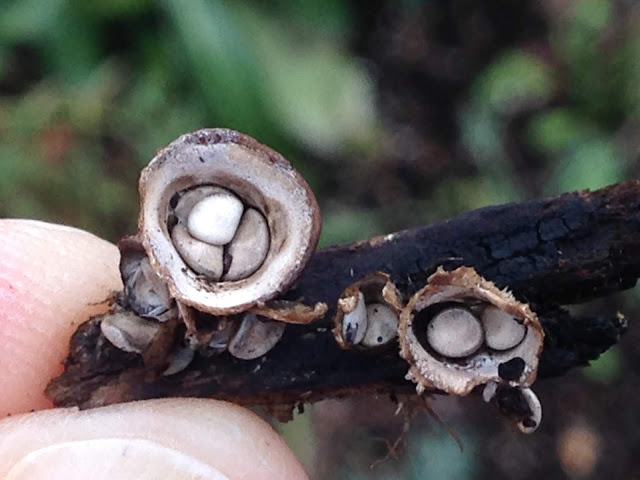 I took an embarrassingly large amount of photos of the Bird's Nest fungi!  I must have gone outside six times to get better shots, and to try to get them sans Boo hair, which is long, luxurious, silky... and sheds.

Another thing that wet weather brings out is a happy Boo!

Boo enjoys the overflow rain in his "gutter games."

The mountain seen from my bedroom doors has snow for the first time this season. 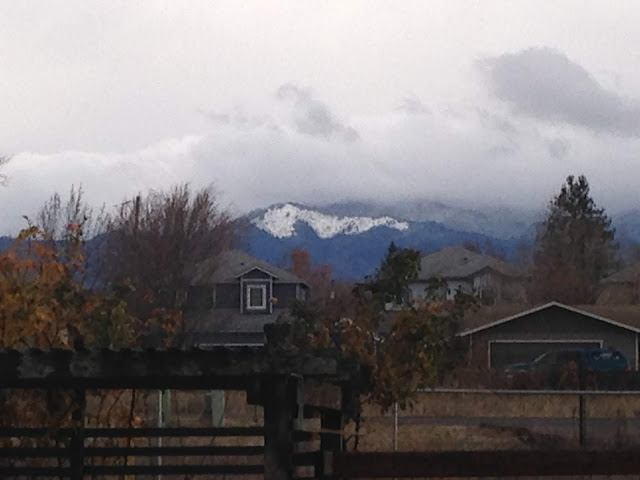 There has been some tremendously beautiful frost the past few mornings.  Those photos have to wait for their own post, I took plenty!
I also have a mushroom activity to share later.  One we did when my kids were home-schooled.  That would fit right in with today's post, but I don't have any mushrooms (from the store).
Labels: Boo mushrooms seasons weather