It's Winter Sowing time once again!


I did it last year (didn't start until later, didn't even know what it was!), with more success than I think I gave it credit for. Yes, I can direct seed a lot and they'll have plenty of time to grow and flower and set seeds, but it's fun!  Plus it gives a reason to order seeds in December!


This is how I look at it...
Yes, "seeds are cheap" is there twice, because that's the major reason I buy so many.  I can afford a few extra packs or two (or dozens) when they cost a dollar.  If they don't grow I won't regret the money spent like if a pretty gallon size perennial dies.

Winter Sowing is a great way to grow many seeds, especially if you have a long, cold winter.  I've posted about it before, but here's how it works again.

What to Winter Sow:
Seeds that need to be chilled before sowing, or can be sowed in late fall for spring germination, will work for Winter Sowing.  Seeds from plants that self-seed, those that come up volunteer in the spring, those are good too.   Perennials and hardy annuals, seeds from plants with the words "prairie," "weed,"  "mountain," or "Alpine" in their names.

You can sow tender annuals (marigolds, zinnias), even tomatoes (they volunteer where fruit fell last season, right?), the same way later on. I'll do some annual flowers in March, but most do fine by direct seeding.

How to Prepare the Seeds:
With Winter Sowing (capitalization is mine) you do not need to put seeds in your refrigerator, nature does the chilling.  The seeds will germinate WHEN IT'S TIME FOR THEM TOO!  Really, they do!  They will not start growing just because they are put into soil.  They will wait until the days, nights and soil are warm enough for them.  You just sow them as per the package instructions and let them be.

What to Use:
You're making little greenhouses, so you'll want containers that are transparent.  Milk jugs are perfect (if they are the kind you can see the milk level through the sides!).  2 liter soda bottles.  Plastic deli containers with domed lids.  Just so long as:
I use milk jugs for those plants I want quite a few of, like snap dragons or alliums.  The soda bottles (there goes my 10 cent deposit per bottle!) and large Slurpee and McDonald iced coffee cups are ideal for those I only want a few of, such as catnip or goldenrod.  The Slurpee and McDonald cups have high domed lids, which I love.  Of the soda bottles, I prefer the Coca Cola brand!  They taper in on the bottom half, making them easier to fit together than the cheaper brands.  The plastic is heavier too.  You can buy foil baking pans with lids at dollar stores.  Use your imagination!

Preparing the Containers:
First and foremost, anything you use needs drainage holes. 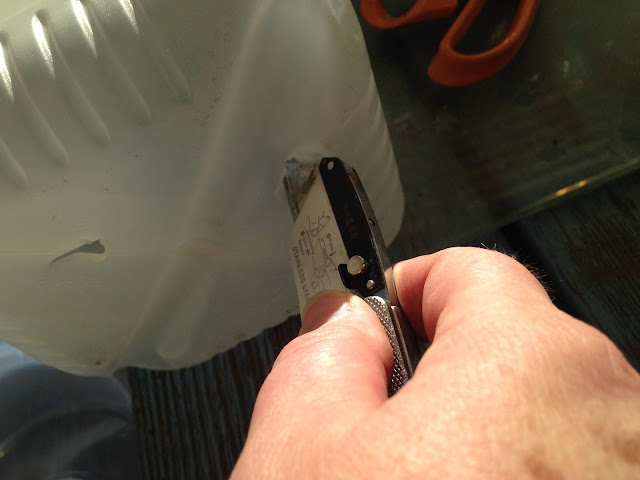 If you are using milk jugs, throw away the caps!  No further cuts are needed in them for ventilation and rain access.   Domed drink lids have a nice big opening already. Any container lids with no holes needs to have them!

Cut the jug almost all the way around (keep attached near the handle), high enough so 3" - 4" of soil can be added to the bottom. 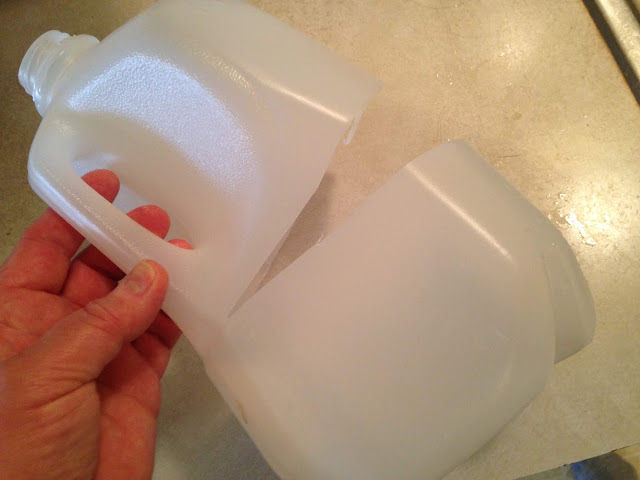 Words of advice - cut holes etc. as you go along, not saving a few dozen to do at once!

More words of advice, and this is very important - don't stress it!  I've seen photographs of gardeners measuring their jugs to make sure their cuts are even.  I've read "tips" on how to make drainage holes by heating nails, or using power drills!

Hogwash.  These containers are trash, and are going to be filled with dirt!  I am going to spend as little time as possible on them!  And, guess what?  Once you close them up, no one is going to see the crooked cut line!  And, the seeds don't care.  I just use a utility knife and a pair of scissors.  Stab the knife in where I want the drainage hole and twist (see photo above).  Poke the scissors through near the handle, and cut around to almost meet the first cut.  My milk comes from two different stores, but both jugs have built in guides, if it mattered.  I cut through the center of the circles, and along one of the lines.  Straight enough! 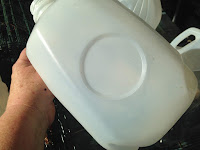 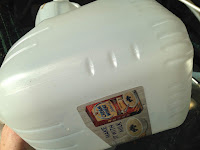 What Kind of Soil?
It's more important to know what kind NOT to use!  Do not use seed starting mix.  These seedlings will be in their containers for quite a while, and seed starting mix does not have the nutrients they'll need.  Use container mix or potting mix, or potting soil  Not any with water retention beads or things like that, your seeds may rot.  The kind with slow release fertilizer is fine though.  I used cheap stuff, and dug in some extra peat moss to the containers I sowed today because I though it was too heavy.  Sure, peat holds water, but I have lots of drainage holes!  I plan to add sand to others.

Wet the soil well, and let it drain.  Then, sow your seeds.  Sow them thicker than the packages will say, you can nip them off if there are too many.  Better too many than not enough.

Seal the milk jug cuts with duct tape.  Label the jugs.  This is such an important step!  A lot of those seedlings look alike!  Use something waterproof to label them, or put Popsicle stick tags inside.  What I am doing this year is numbering the containers, and keeping a "Master List" of what is where.  To hedge my bets I also am placing the containers in orderly rows starting with 1!


My "Master List!"  I won't tell you how many items it runs!  It's amazing just how many plants are Winter Sow-able.


What Now?
Put the containers outside in an area where they won't be blown over, but open to rain, snow, and sun. Mine are in an unused raised bed.  I won't be needing the bed until the seedlings are out of their containers.  Now, ignore them.  They'll be fine.  Once you have warmer, drier weather, you may need to water a little, or vent if the weather is quite warm.  Later than that, you'll bend back, or remove, the tops to let them sun during the day.
Below is a photo of what I sowed in those first fourteen containers.
You can find all the information you need about Winter Sowing online.  These are my favorites, the second one also being one of my favorite sites on all the Internet!

So, fourteen down and done, um... a lot to go.  More than containers I think.  I need to take another look at my "Master List" and see what can be direct sown instead!

One last thing...  the mail came as I was writing this post.
Take a gander at these beautiful beans!
They're huge too!
Scarlet Runners 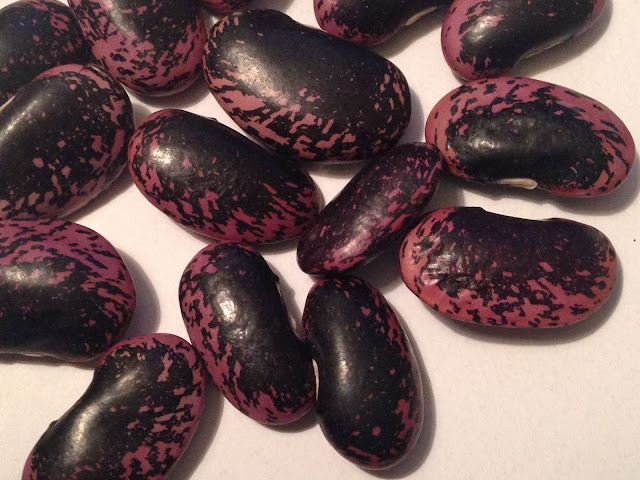