A - Artemisia, Alliums, and Anise

Welcome to my Blogging from A-Z April Challenge 2020 edition!  Let's start off this 26 day show!

Artemisia may be annual or perennial.


Artemisia may not be a familiar herb name, but tarragon is an Artemisia, Artemisia dracunculus.
I have been growing French tarragon in a clay pot since I got it in 2014.  French tarragon is the only “real” tarragon used in recipes!  It is only propagated through stem cuttings or divisions.  If you see seeds offered for French tarragon, they aren’t, they are the culinary inferior Russian tarragon. A perennial that dies back in cold weather, I divide my tarragon each spring. Read more about French Tarragon on F-Day. 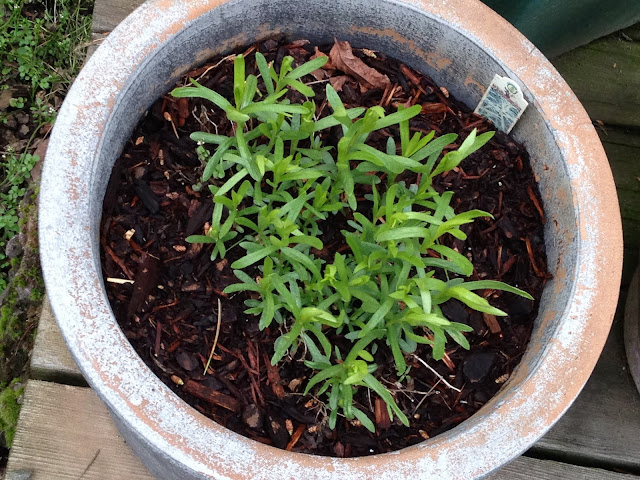 Another Artemisia is wormwood, Artemisia absinthium, a perennial I am currently growing from seed.  Wormwood will be covered in a little more detail in my W post.

Alliums are well know, at least by their everyday names, herb.

Alliums are grown for both food (onions, garlic, chives), and flowers (drumstick, Purple Sensation, Moly), or in my case, both (Welsh).


Alliums can be grown from seed, but if you are growing it for the flowers, like me, it can take several years to bloom, so it’s best to plant bulbs.  My garlic chives were started from seed in 2018, bloomed in 2019, and the original two plants have spread to a nice little patch. The patches do need to be divided every few years, or the plants won't produce as well as previously.


Chives like full sun, and while many references mention keeping their soil consistently moist, my original chives have been growing in the herb garden for years, and it is on the dry side, with purposely lean soil.  They do fine.  They also did fine in containers, and my Welsh onions do fine in vegetable beds, where they do get more water and fertilization.  I don't think alliums are fussy!

Garlic is covered in G, Onions in O and
stay tuned to C for more on Chives!

Anise (Pimpinella anisum), also called aniseed, is an annual herb in the parsley family.  It is not related to either anise hyssop or star anise.

It needs full sun and will reach about 3' high.  Anise from seed needs a long growing season, so start it indoors if yours is shorter than 120 days.  Anise can be directly sown in the garden, and actually prefers this, as it does not transplant well.  It can be grown in deep containers.

Anise is a new one for me this year, I Wintersowed the seeds in January, so it's still a little bitty plant. 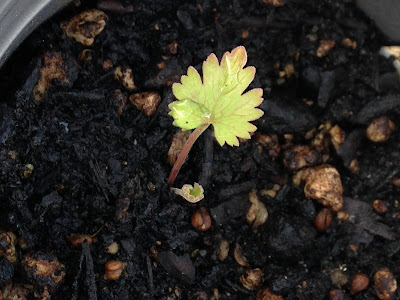 Anise is an annual, and it's best to rotate its location yearly.

Dried anise seeds taste like licorice and can be used whole or ground up, in sweets (biscotti is a popular use!) as well as savory dishes.  The root and leaves are also edible.  The leaves can be chopped into salads, the taste is milder than the seeds.

Medicinally, anise is said to help cold and 'flu symptoms when used as an herbal tea.  Anise is used in aromatherapy to combat nausea.  There are also a multitude of other claims, but so far research only suggests it's effective in helping with indigestion complaints and irritable bowel syndrome.

**Medicinal doses of anise are likely safe, but more research is needed.  Anise may have some of the same effects as estrogen on the body.  It is shown to interact with birth control pills, and drugs for certain types of cancer.**

It's been a long March, hasn't it?

The garden keeps on without regard to human problems.  I read a post somewhere stating that nature would never be the same.  I disagreed.  Nature goes on without us.  It doesn't need us to survive, we need it.  From all reports nature is doing pretty darn well without us!  Satellite images show less pollution over much of the world since shut downs and stay at home orders, in some locations it's an amazing difference. One can't honestly say we aren't causing problems to our own environment!  Oh, there will be many who will say it, but it won't be honestly!

Another discussion online I was reading had to do with whether we'd have changed after all this is over.  If we'd still be working together, with fewer divisions.  Well, I don't know about anywhere else, but we are NOT working well together in the US!  We are still divided and are becoming more so each day as those for our current administration defend it, and those against it push back.  My state is doing well, our numbers are quite low considering we're trapped between two high virus case/death states.  My city is divided by the interstate highway, so travelers from and to those states come through daily.  For the most part, the only place I see (from inside my car, I do not go in anymore) people are in the stores.  I do find it a shame that some stores are insisting they are "essential" and remain open.  Profits over health of customers and their uninsured low-pay employees.  "But, we sell things people NEEEEED when they work from hoooome!"  Right.

I am happy to have a garden to escape into, as well as the, for now, freedom to take walks.  Something else to appreciate is the Internet, the ability to communicate via computer or phone, play games and watch movies.

I'd be escaping into the garden more if the past couple of days hadn't been so cold and nasty. No more claims of "an early spring!"

I am fighting a losing battle against the neighborhood cats in the front yard.
I rake up their messes, and things look nice until the next morning.  I'm ready to yell across the street, "Keep your cat out of my yard!  Mine don't come over to your yard!" next time I see the owner outside. Today I found they'd gone on top of the blue fescue!

I've transplanted quite a few things to the front yard, in hopes of filling it in.  Perennial coreopsis (of which I have many, many transplant every year, they are very prolific!), both lance-leaf and Up Tick.  Penstemon (broken pieces off the main plant root so easily), yarrow and chives from divisions... really just about anything I can find to transplant, including a potted something that came in a container from the nursery a few years ago!  It's perennial, with growth like an iris or something!

I also scattered a bunch of California poppy seeds.  I have a couple of boxes of those Dollar Store pollinator mixes I'll strew in a week or two.  I think we're about done with freezing nights. 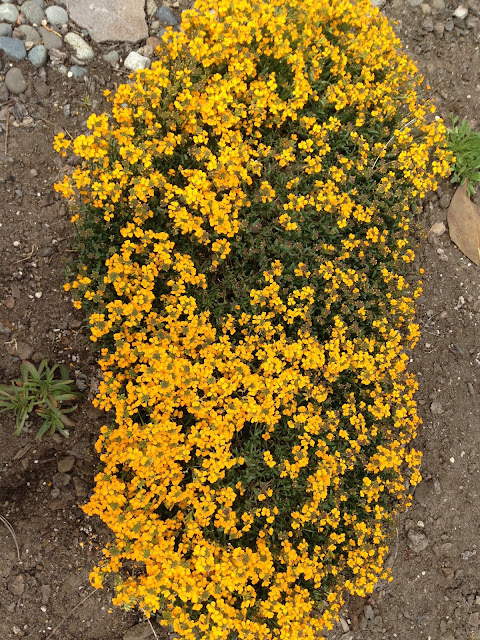 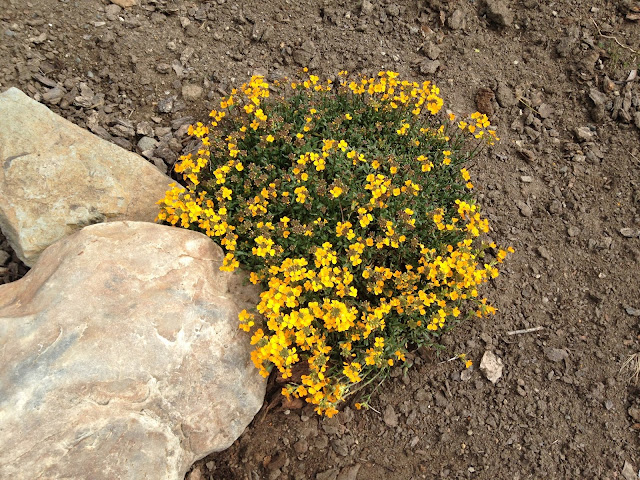 Here's the "one" in and out of the herb garden!
It isn't a heavily traveled path, so I just let it do its thing. 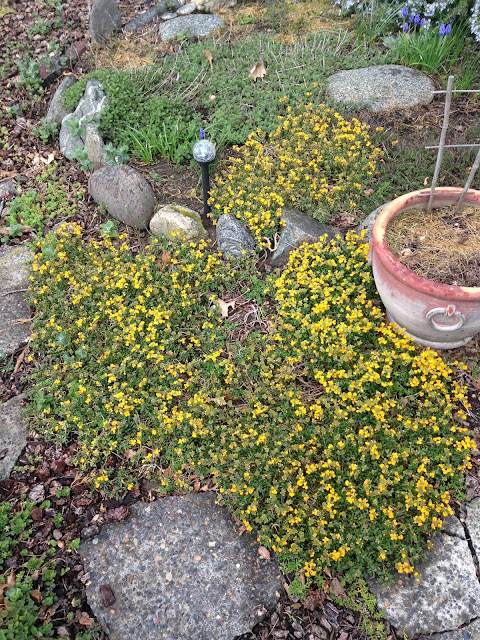 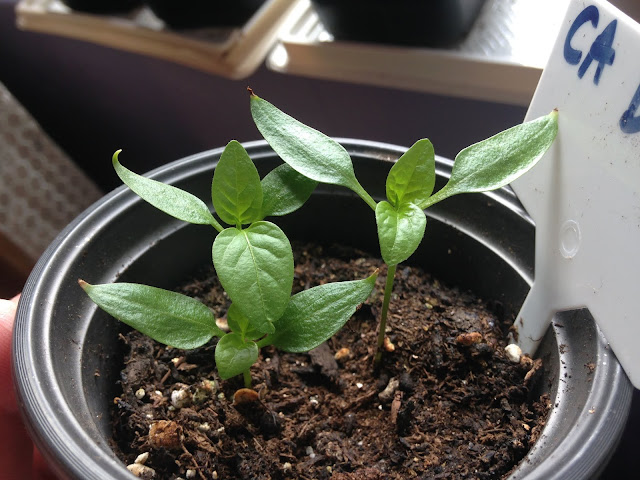 The Persian catmint continues to be the star in all the areas it's planted.  Hard to imagine a year ago it had just been moved from Wintersowing containers to pots! 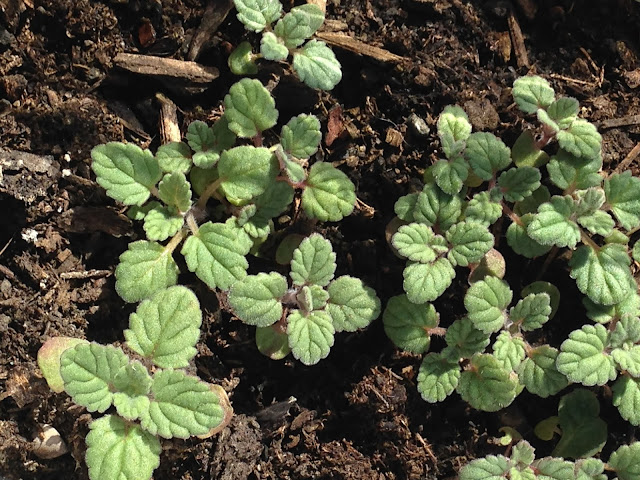 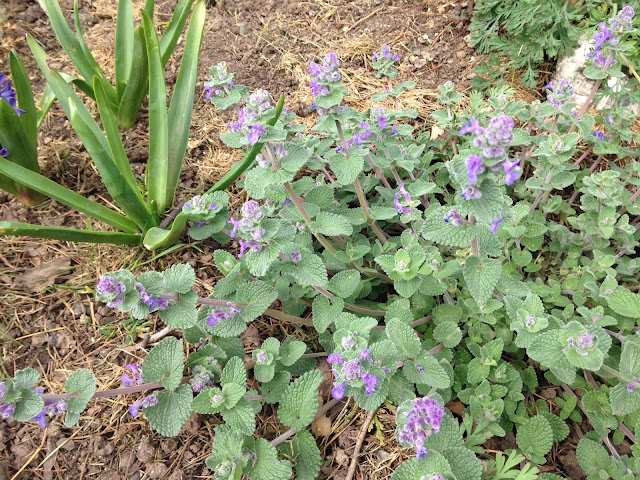 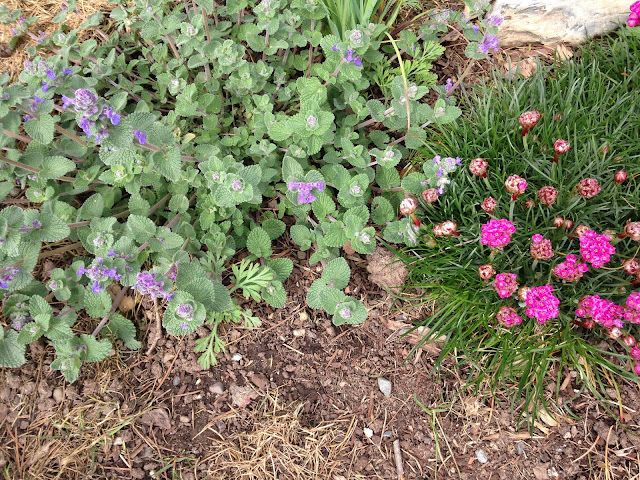 I mentioned being in Portland earlier this month (which feels like so much longer ago!)
but I failed to show you the adorable coffee/cocoa mug my adorable daughter gave me! It's from the library book store.  Oh, now I went an mentioned the word "library."  The libraries are closed, and I miss them above all other closures!  I am two books behind in my Goodreads challenge goal!  I traded my box of Agatha Christie novels (from a book sale) for a few mysteries via Craigslist, but it isn't enough!  I'll have to roam the neighborhood for Little Libraries, my son says  he's seen a few nearby.  Or, shudder, I will have to resign myself to reading ebooks! 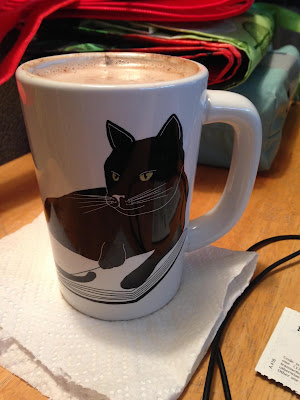 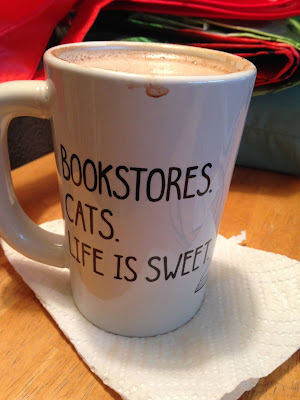 I did ask my son to pick me up a gardening magazine from the grocery store a few days ago.
He got me Garden Gate, one I'd never read before.  It's pretty good.  I may take advantage of the discounted subscription card inside! 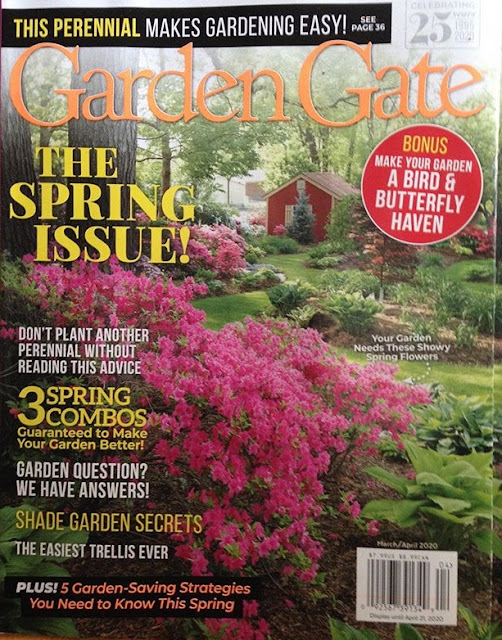 Wednesday is April, which means Wednesday is day #1, or A-Day, for Blogging from A to Z April Challenge.

There is still time to join in!  26 letters in the alphabet, 26 posts in April!  Daily, with Sundays off.
My theme here will be The A - Z of Herbs.

I am also doing an A-Z over on my poetry blog.

Another Saturday means another Six on Saturday, which these days is a lifesaver for many gardeners!
Something to look forward to, something to plan for!
Thank goodness for gardens, even indoor and container gardens.

Here's the place where gardeners come together on Saturdays!

1 - The first pollinator was spotted on the anemone blanda! 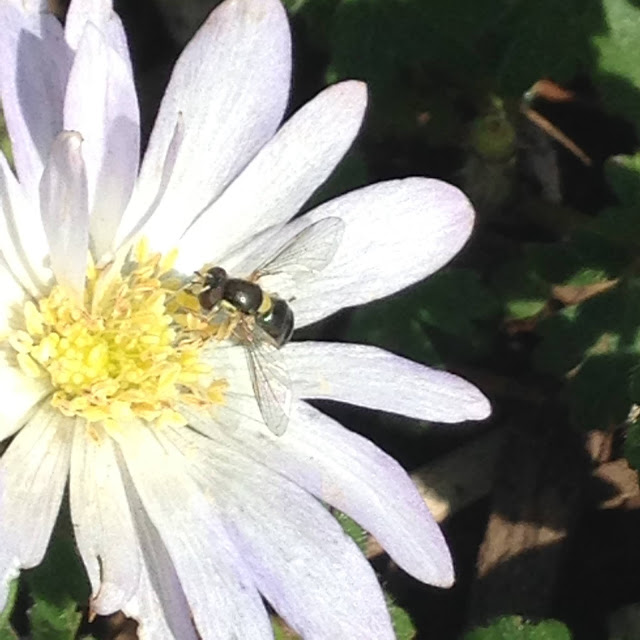 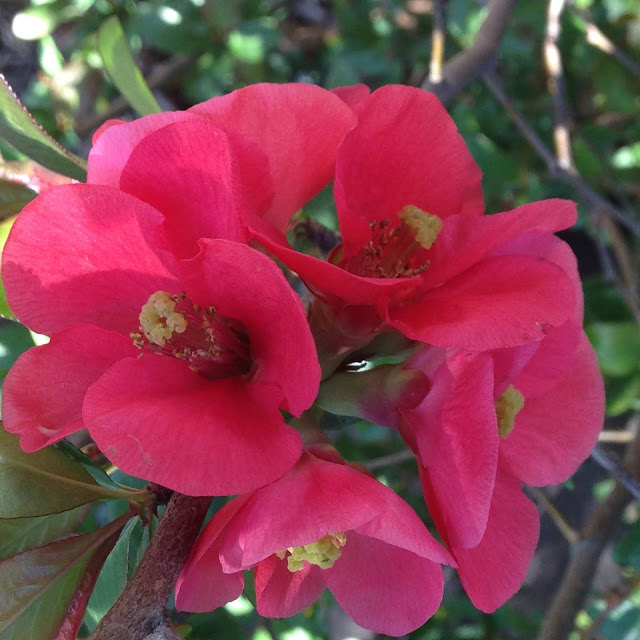 We are still free to take walks, so long as we aren't within 6' of others.  Our walks can be for fun, not just necessary errands.  So, my son and I took the dog, Boo, on a walk a few days ago.

3 - Roxy Ann Peak.  It's called a mountain, but with so many mountains around the valley it's hard to consider 3,576' a mountain!  It's part of the Western Cascade Range. It looks better from a distance, it's pretty dry and scrubby up there!  The view's nice though. 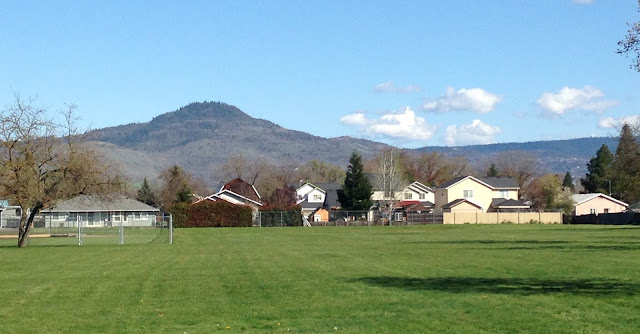 4 - Tulip trees on our walk were in bloom.
This is Magnolia liliiflora, not the tulip poplar,  Liriodendron tulipifera.
There's a big gorgeous specimen at the mall, but since the mall is closed until further notice (as it should be), I'm not making a special trip to see it! 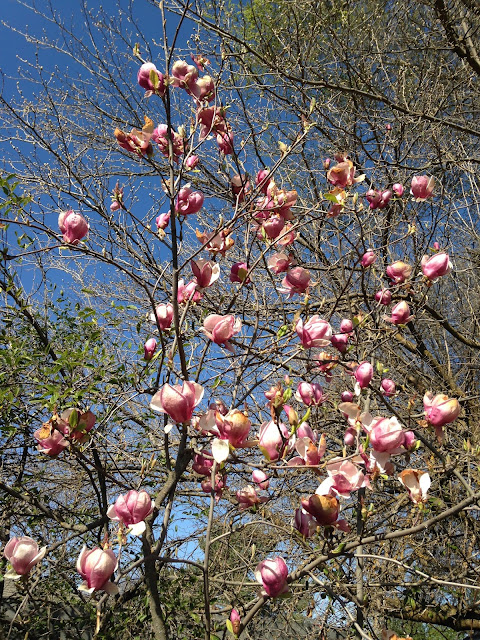 5 - My asparagus has a problem.
Nothing that come up was big enough to harvest!  Plus, the entire middle of the bed is empty.  I dug down into the center yesterday, and the soil is very nice, but nothing at all growing in it.  I'll fertilize extra well this winter and see what happens.  I didn't plant the bed, so for all I know it's died a natural death from old age.  It was disappointing not to get any, it has such a short season. 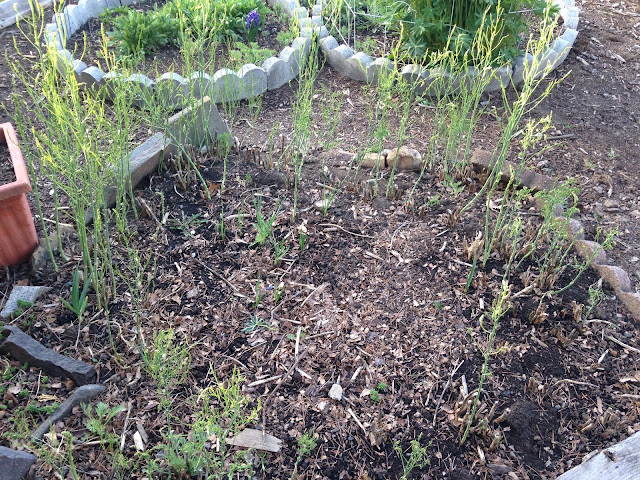 6 - Marshmallow in Chocolate tomatoes!
Yes, I bought the seeds because I liked the name!
Marshmallow in Chocolate is a Russian variety, developed in the 21st century for growing in greenhouses.  Mine will be in raised beds outdoors. They got moved to their own little pots two days ago.  The window sill is the perfect place for them, and this is the first year I've had access to it!  A child moves out, you gain a window!

The growing tips included this gem:


Juicy and sweet pulp of these tomatoes will not leave indifferent even the most sophisticated gourmets. 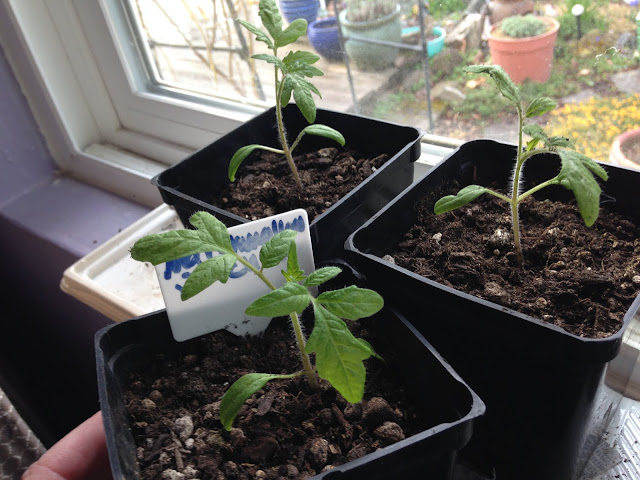 A bonus tomato photo, because she looks so nice and has grown tremendously in the past two days. Introducing my Mashenka, another Russian variety, potato leafed. 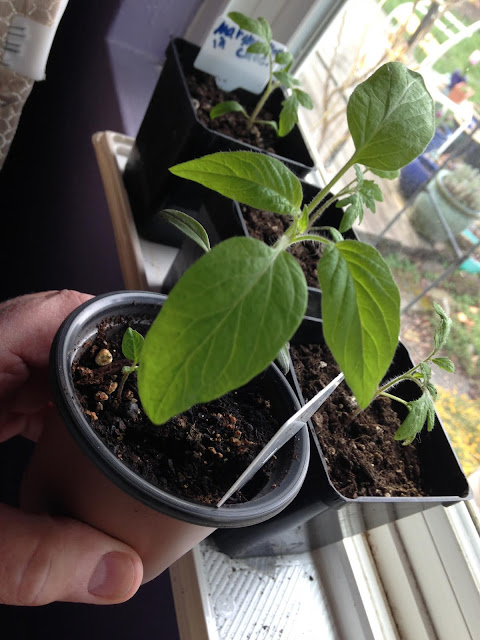 Those are my six for today.

Take care.  It's tiresome if you're told to stay in, but it's necessary and won't last forever.