How are Those Vegetables Doing? (mid-August 2020 update)

I'm not sure I've been updating on the vegetable front.
It could be I forgot, or I'm not growing as many as in previous years, or
it could be that they have been slow and nothing to mention.
Probably all three.

The bush beans are well behind last year, when I was harvesting bowlfuls in early July.

I picked five today, and they were not much to brag about, sort of dry feeling.
But, the plants look good, in all three beds, and have plenty of flowers.

This is the old asparagus bed.  Now and then a tiny frond appears and I pull it out.
The soil is very rich from all the manure I mulched the asparagus with every winter.
The two larger plants near the bottom are Mexican red sunflowers.
These are some sort of green bush bean bought at the grocery store by my son.  They took right off and are as big as the ones planted weeks earlier. 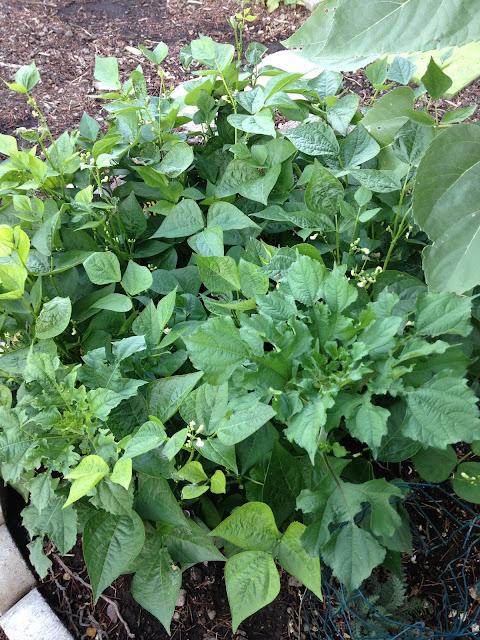 A 4' x 4' bed, my #5.  These are mostly Slenderette bush beans, whioch did really well last year.  The first planting (May 16) failed (mostly eaten before coming up), so these were either started in pots or direct seeded later. 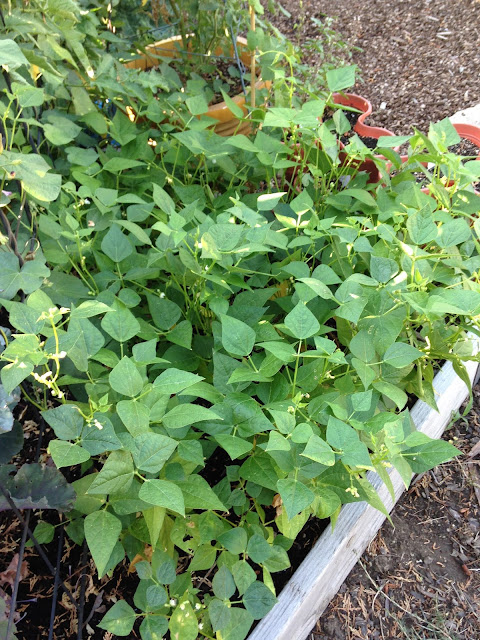 My bed #2, an 8' x 4' cedar has more Slenderette and mystery Winco bush beans.
I very much prefer bush beans over pole. 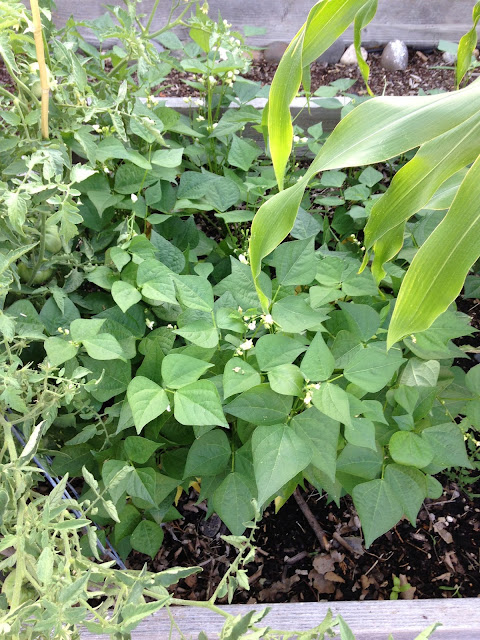 I may prefer bush beans, but sometimes I don't get what I want from them! 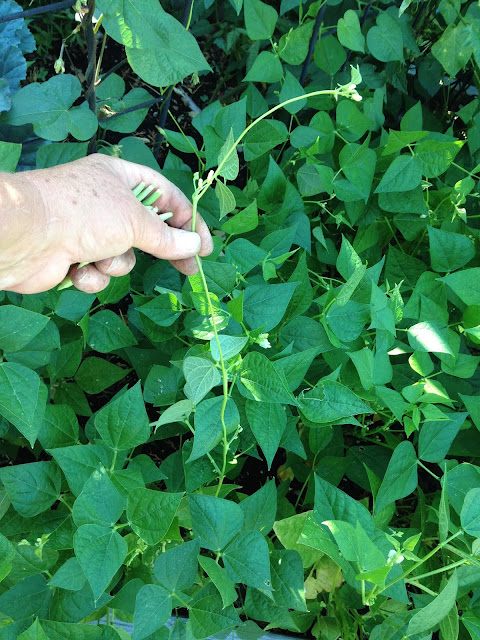 I didn't grow cucumbers this year, but last had a trug full of them mixed with loads of red tomatoes.
I've had two tomatoes so far this year, one last week, one last night, both Mashenka, grown indoors on a heating mat, gro-light and then a windowsill. 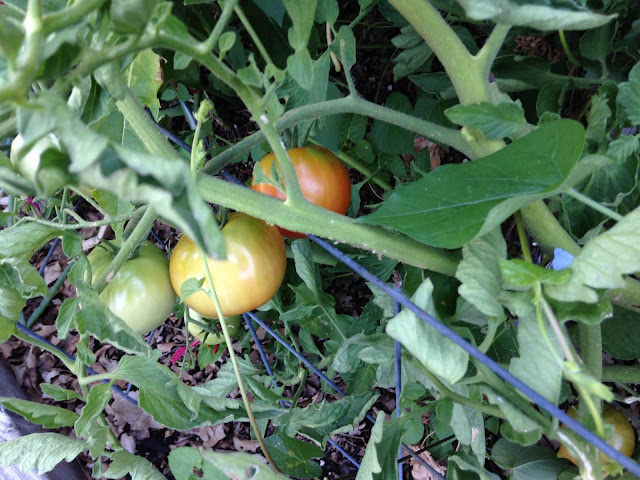 Marshmallow in Chocolate is starting to color up as well. 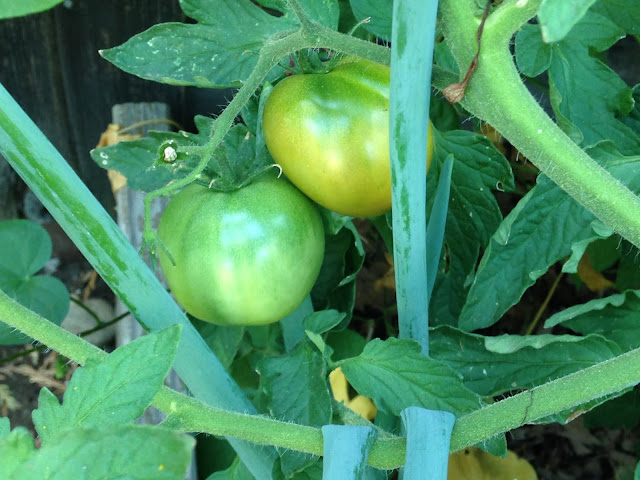 There are three other tomatoes, Wintersown successes, except I mixed up their labels.  There should only be the choices between Mashenka, Marshmallow in Chocolate, and Pineapple.  I did have seeds for Black Sea Man and Chocolate Cherry, but I don't think I Wintersowed them.  At any rate, these are not cherries, more the pity.

One is huge and covered with fruit that is going to be huge as well.  Some are already cracking the stems.  This may be a pineapple tomato. 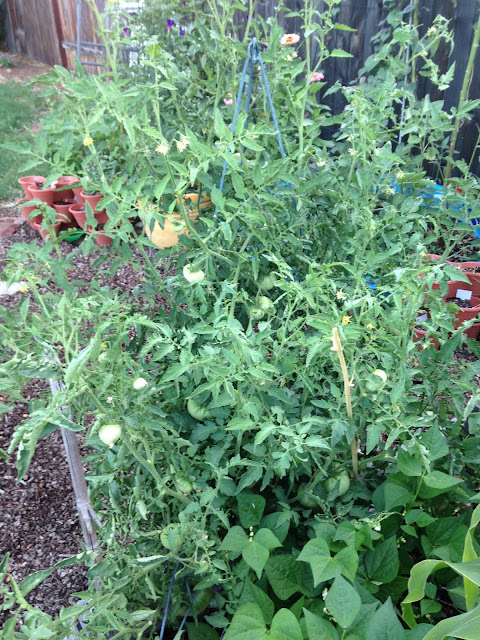 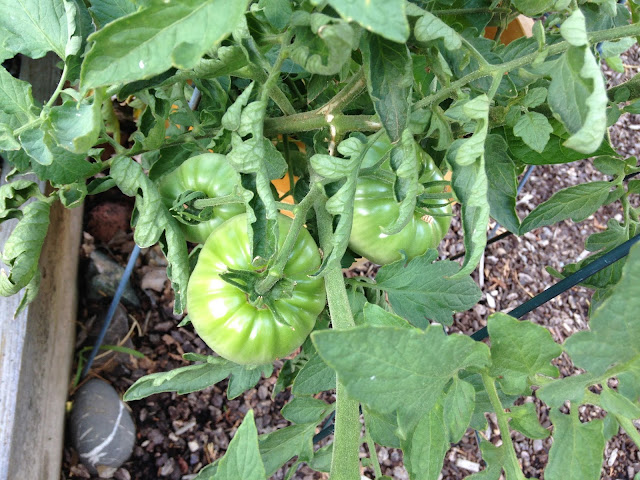 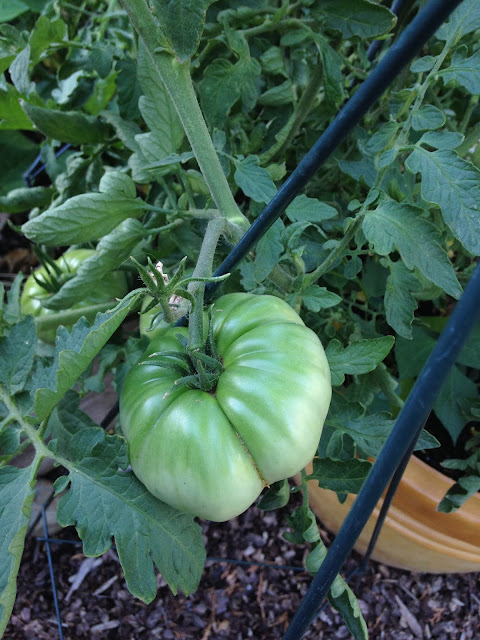 The other two are smaller, one in a container and one in bed #5. 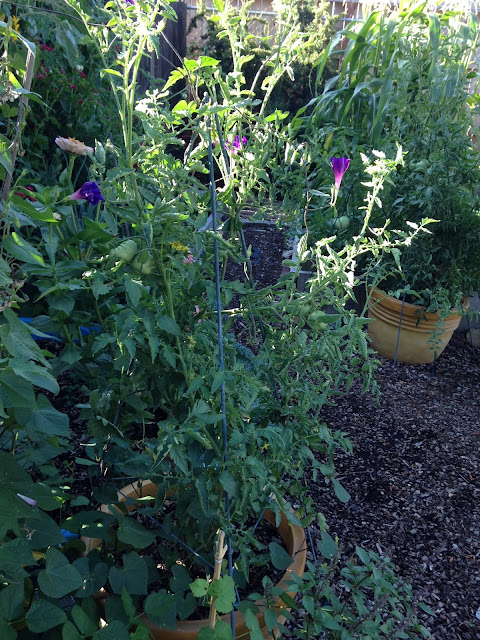 The fruit on this one is shaped differently from the others. 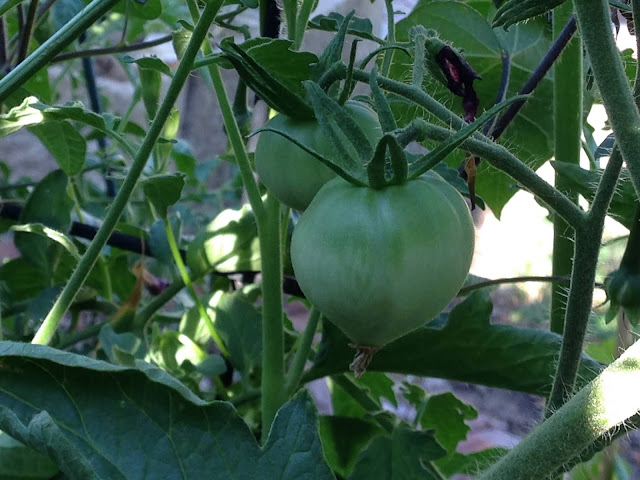 The one in bed #5 get a bit too much shade, but it's getting there with fruit a bit flatter than the others. 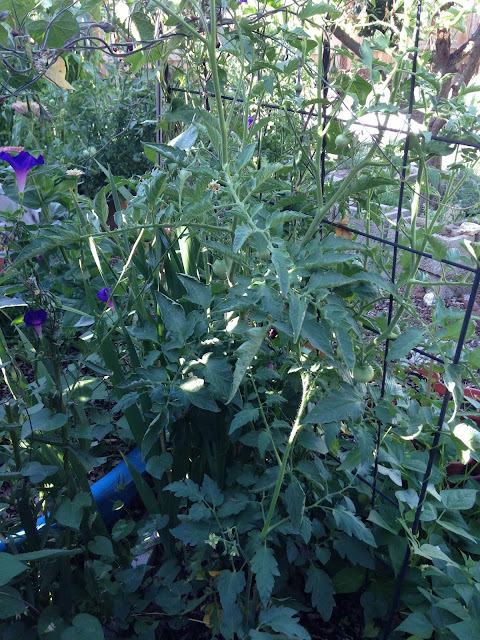 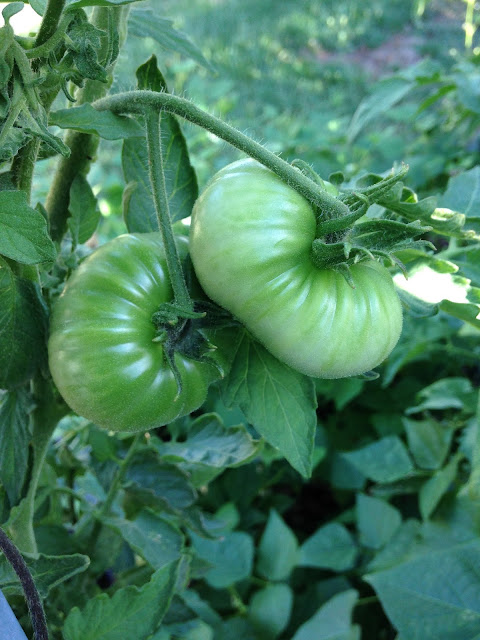 I grew corn in 2018, skipped it last year, and since I had room, again this year.
In 2018 it was Serendipity, this year Butter and Sugar.
I'll try a different way of cooking it, and cook it less, since it's gummy and sticks to our teeth.
If it's the same then I'll go back to Serendipity next year.
Butter and Sugar does form two cobs per plant. I still find corn a bit of a space waster in the home garden.  One or two cobs on a huge plant.
A pain to get pollinated too!  I will address that issue and what I did in another post.  No, it has nothing to do with a little paint brush!  My method needs nothing but you. 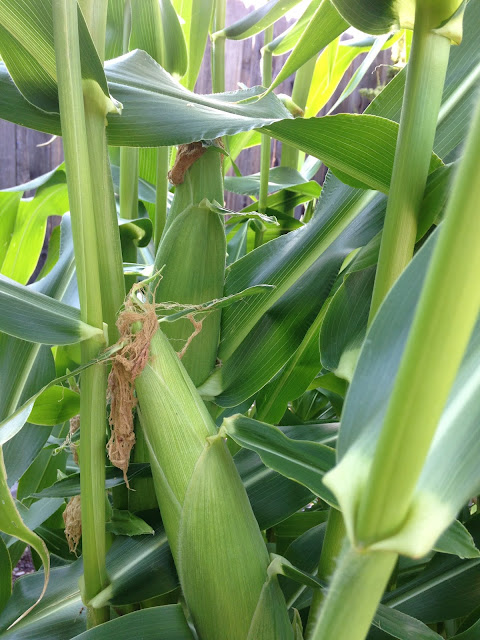 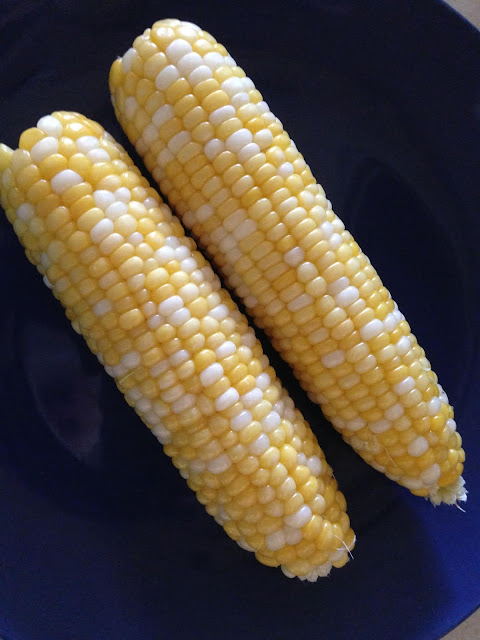 The corn, a Mashenka tomato, one green Welsh onion, and three sage leaves last night.
I ate the tomato while cooking dinner.  The sage and onion went into ground turkey burgers. 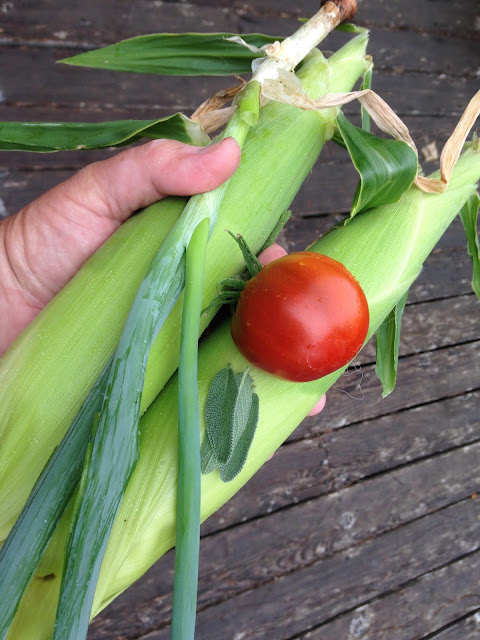 Things I didn't expect to grow, or shouldn't be growing in the heat include the kale and kalettes.
Kalettes, in case you haven't heard of them, I hadn't, are a cross of kale and Brussels sprouts.   Tiny kales grow where the sprouts would be!

Kale.  It likes cool temperatures and will even take a bit of frost.
I started mine early in Wintersowing.  Nothing much happened, so I tossed the rest of my seeds in bed #4, the Pool Bed (a cracked wading pool with the bottom cut out).
Two plants grew and are still growing.  There are been several heat waves, and I mean really hot ones this summer.  Hot as in days of 105 or more.  Yesterday as 106, today is over 100.  The kale doesn't seem to care!  The thing is, I do not like kale.  I gave it one last try, and it's nasty tasting!

This is blue curled Scotch.  Which reminds me of a woman I worked with years ago.  She was from Scotland and took exception to anyone saying she was "Scotch."  Apparently, to a Scot, Scotch is only used for the drink!   I don't know who misnamed this kale.

Also, growing below the Scottish kale is Italian Giant parsley, a flat-leaf variety. 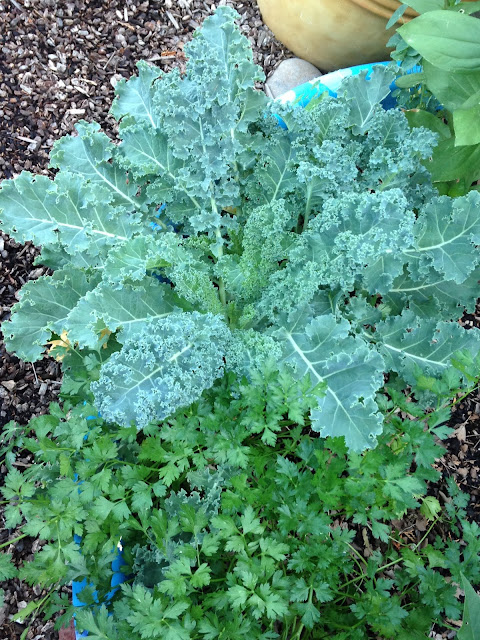 Two kalette plants.  Both have purple stems, but only one purple veins in the leaves.
They are worth their space just for their beauty.  Kalettes take a long time to mature.
They are just little bumps right now. 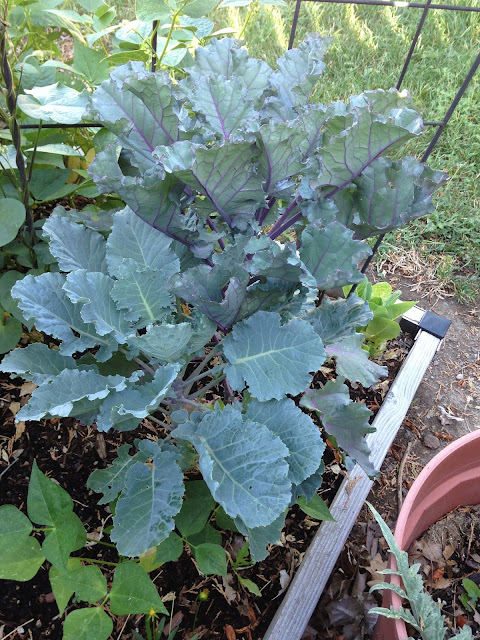 Two tomatoes have been started from stems rooted in water.
This is the biggest.   The stems were suckers pruned off the plants.  Just stick them in a cup of water for a few days and they grow roots. 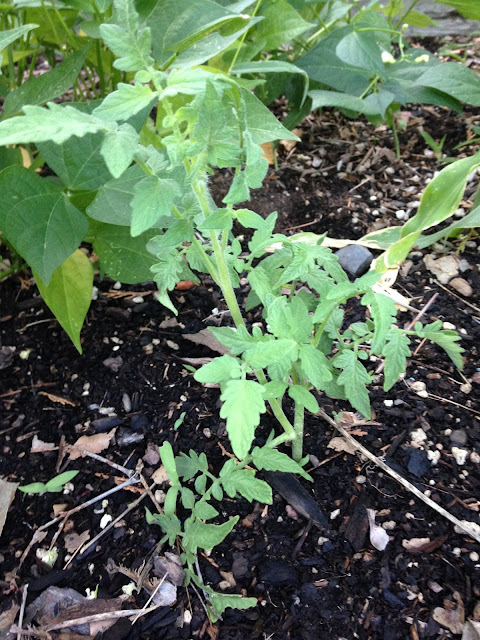 Upcoming vegetables include these newest, Dragon Tongue bush bean
and Honey Boat Delicata squash.
I never thought to plant squash so late in summer, and did save half the seeds for next spring.
Baker Creek Heirloom Seeds (rareseeds.com) sent an email about what could be planted this late in my zone.

I see I have to get on the ball to stop the night nibblers.  Usually they're sow bugs in my beds. 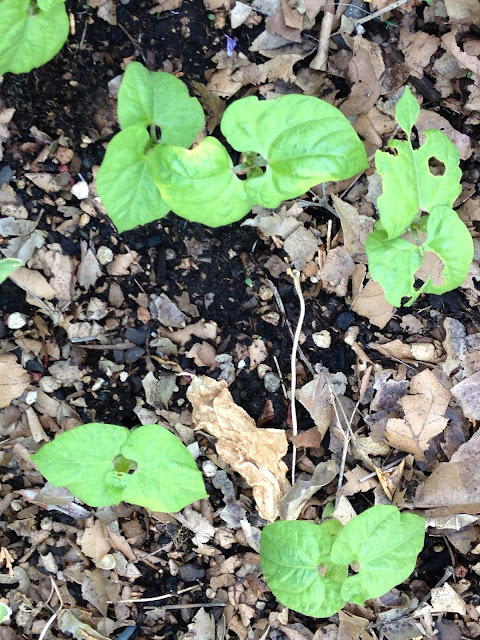 I've got a good two months before the first frost, so these little Honey Boats should be fine. They were actually developed in Oregon. 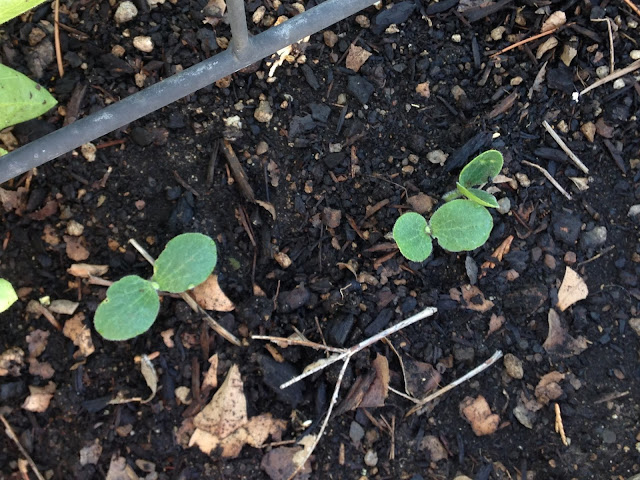 It feels as if summer is drawing to a close already, even when it's over 100 degrees and my beans haven't started producing yet.
Believe it or not, I've already started gathering my Wintersowing seeds for the 2021 season!
(Another upcoming post!)