In Lieu of Physical Thrifting - Part 2 - mostly off topic

Part 2 of my mostly off topic - secondhand stuff rant!

Two oil paintings have found their way into my home via eBay.
A California plein air ranch scene with a beautiful eucalyptus tree.
What sold me on it was the peek of Pacific ocean on the horizon!  I have another early California work with the same peek (shown in Park 1).  Now I'm obsessed with finding more!
(This was not a "deal.") 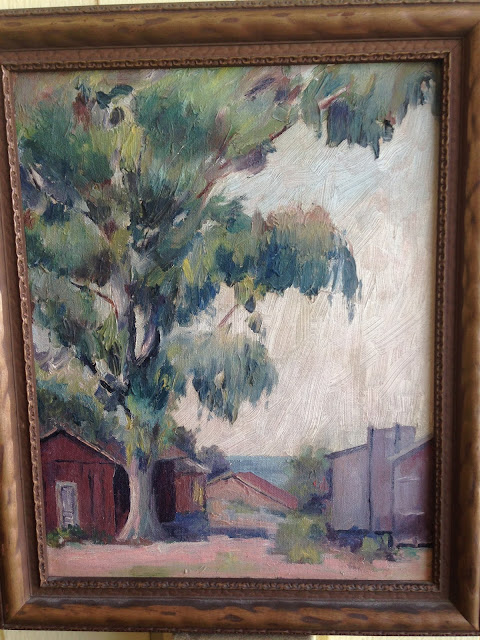 This next one was a mistake.  I didn't really mean to buy it, the auction was a few minutes from ending and I just wanted to test the highest bid.  I bid up one dollar at a time, but became high bidder.  I was convinced the other bidder would be back, but no.  Good thing it was inexpensive!
It's not early California or California Impressionism, but it's not bad.  I am not sure why, and I am no expert, not even an amateur, but the scene looks more European to me.

A lovely Art Deco frame, which is interesting in its own right.
Frank Jacobs was a pioneer in photo-journalism, gaining fame in the Pacific Northwest.  In the 1920s he was the official photographer for Rainier National Park Company.
He owned his own photography studio in Seattle, WA., and became the first photographer to take aerial photos of Seattle, in 1913.  By 1925 Frank Jacobs was concentrating on his photography business, and around 1945 relocated to Arizona for health reasons.
So, while the artist is unknown, the framer, or at least framing company is not! 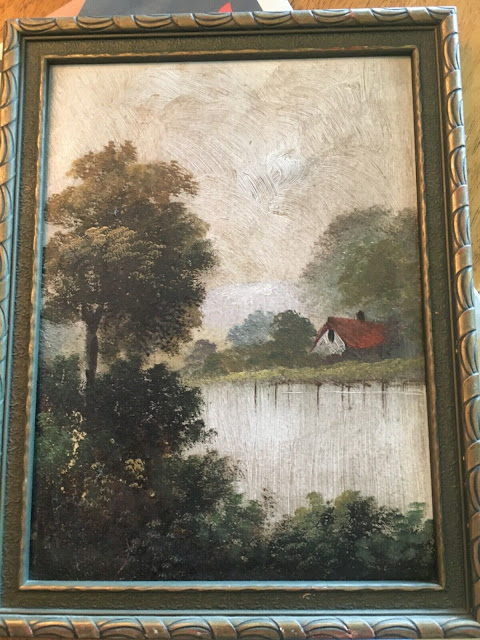 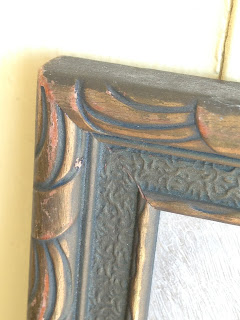 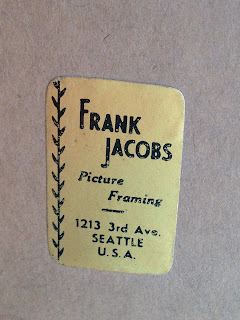 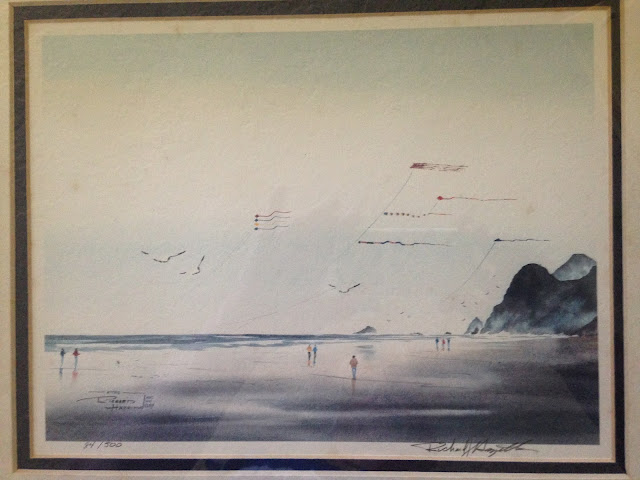 a signed print, 84/500, of a watercolor by Richard Hazelton, an Oregon artist known for his coastal paintings.  His paintings go for hundreds, but limited edition, signed prints much less.  Hazelton owned an art gallery in Depoe Bay, Oregon during the 80s and 90s.   He, like Frank Jacobs, retired to Arizona.

It's 100 degrees and getting hotter by the day.  So, this cool Oregon beach looks inviting.  I grew up with the cold beaches of Northern CA, so understand why these people are wearing long pants and jackets!  We don't have bathing suit beaches! 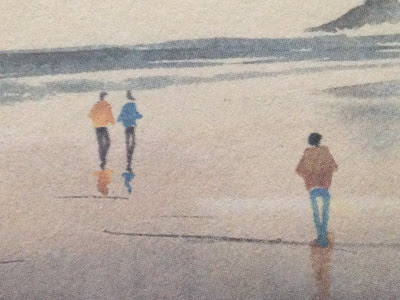 This one was from Goodwill's online store.  It's easy to search, and you can bid or limit your results to just buy it now, and even items that have a 1 cent shipping! They did an incredible job of packing this.
I don't find the frame the least bit attractive;it does nothing for the artwork!

Two other Shop Goodwill buys are this watercolor
"Along the Water" by Hiberly
There was just something about this that kept catching my eye.
I like the reflections. 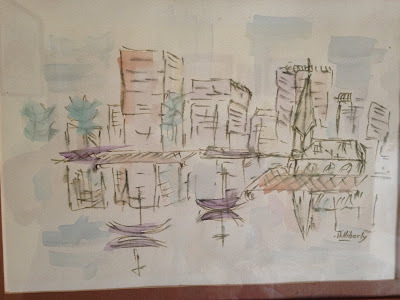 I was thrilled to win the auction for this, as I have another Kaufman print.  There are others I like much more, and one particular one I am after at a good price, but it was fun to find and bid and win!
Al Kaufman was a New York artist known for his intaglio prints.  Intaglio is a method opposite relief printing, in that instead of a raised image, the image to print has been inscribed into the printing plant.
Kaufman made many of his own frames, leading my son to suggest I do not collect art so much as frames by artists (see the Frank Jacobs frame above)!

The reflections here and in the next artwork are terrible, sorry!  I haven't figured out how to avoid it with the glass front. 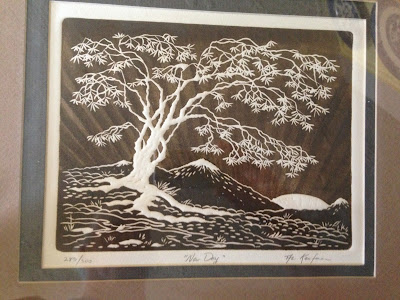 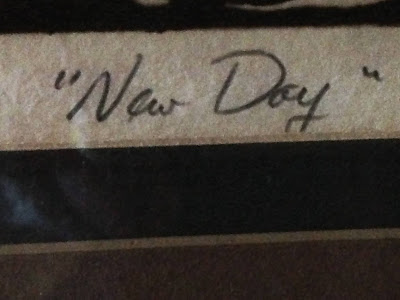 Last, and definitely least, as far as liking it goes, is this mixed media collage.
Isn't it ugly? 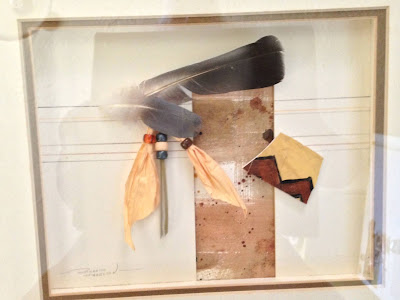 Yes, those are beaded feathers... and a pot shard? 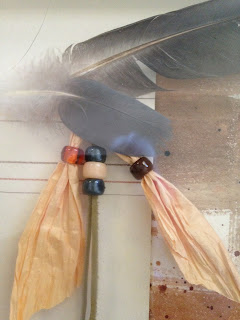 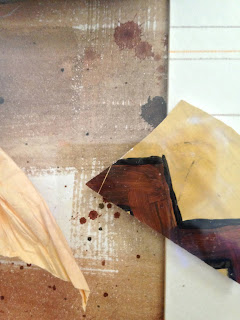 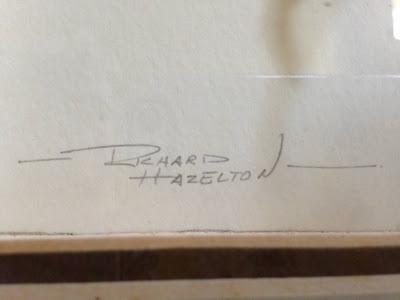 Being recently familiarized with his name (see above), and signature, I couldn't pass by this unique piece.
I have not found any other collages by this artist online, and will continue to research it.
Maybe he was trying out something new, or created this for a particular reason or person.

Actually, it doesn't look half bad on the shelf behind the boar skull.
I'm not sure it looks half good though.
There just must be a story behind it. 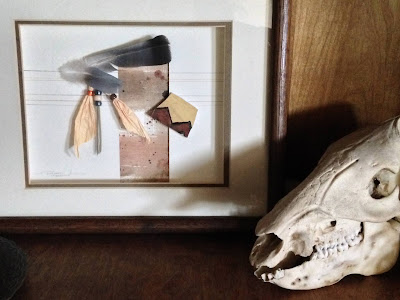 Now, a break from online addiction fulfillment.
I needed to buy a new air conditioner, which cut into my budget!

Oops...  after taking "a break" I found one more "I really want this one" watercolor on the Goodwill Shop site.  It came for a Washington State store. Horribly matted and framed, so that's an additional cost.  I remember how in the 70s I had things professionally framed, and they didn't use acid free tape or mats, and this was the same.  Masking tape. 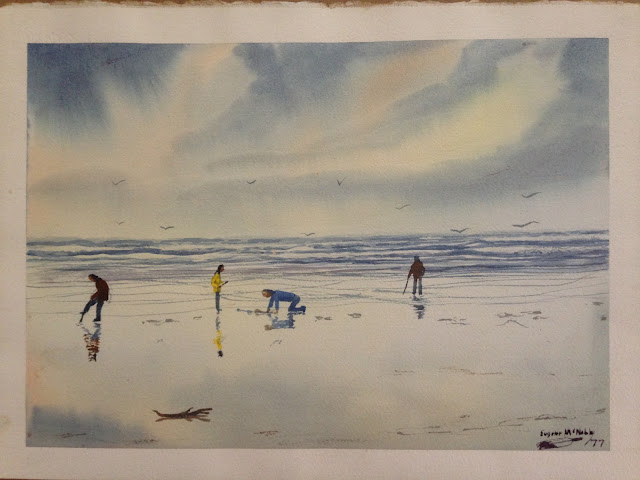 It had slid down in the frame so the signature wasn't showing, and I was a little bit disappointed it wasn't painted by the artist I'd hoped it would be, but I'm still pleased. And, yes, it does remind me of Kites (above) too! 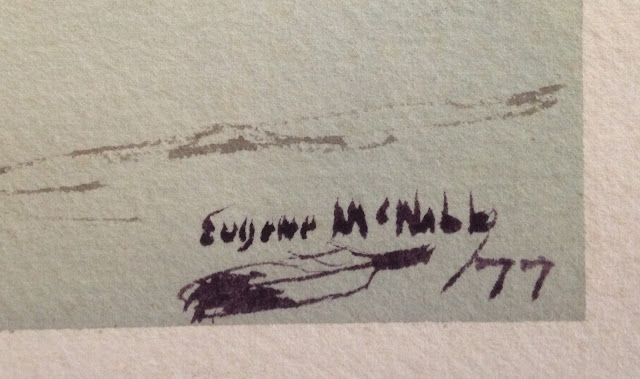 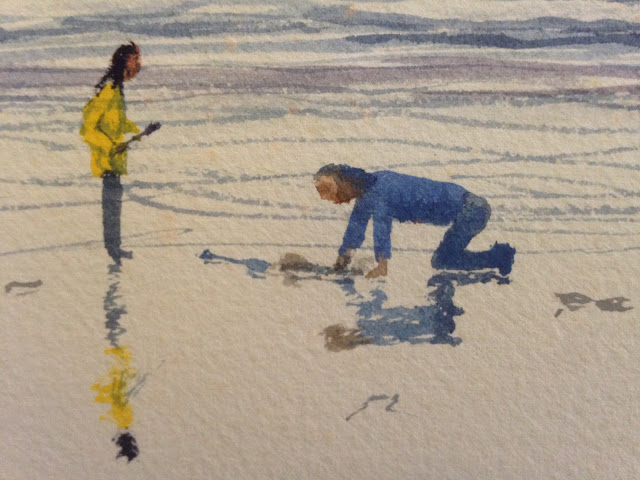 Now I mean it, no more.
Labels: deals eBay off topic