I found some photos still on my old laptop the other day.
Garden, yard, and house photos from 2011 and 2012.

Early photos after moving into my current home I'd forgotten about.

Like this one.
I do not remember ever letting the far back grass go dead!
My son says we mowed it too short one time, but this looks like more than that.
I'm surprised I ever got it green again and didn't turn into a giant mud puddle.
This is September 2012, a year and a couple of months after moving in. We got Edward the Goldendoodle nearly a year earlier (crazy, we already had three dogs!), the Braeburn apple was planted the same month the small raised bed with the fencing was bought, March 2012.  The bed and the Braeburn are long gone.  The larger cedar bed against the fence has been moved.  It received too much shade where it was then.  I paid $85 for that bed, including delivery.  Edward was with us until last August.  I miss him, he was quite a character!  Oh, the fence looks nice, it's so new! 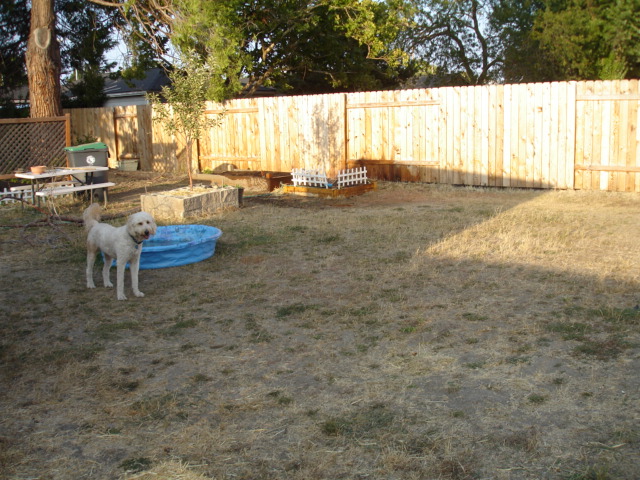 On the other hand, by November 2012 the far back (if you were to turn to your right in the above photo) looked like this.  I think those were calendula from seeds I brought from California Boo's smelling over there in the corner! 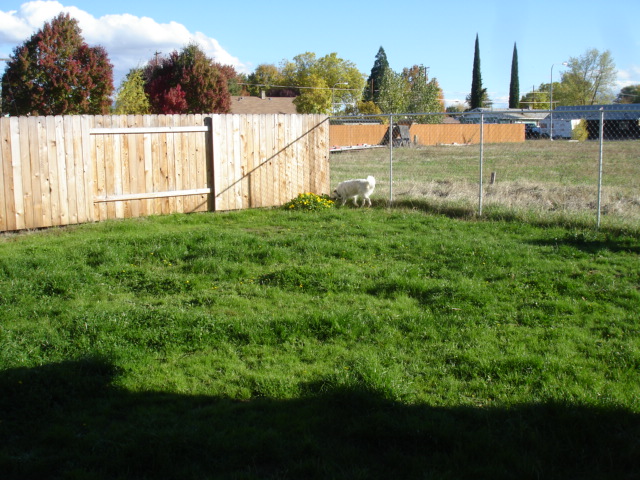 Of course, things got a little too wet that previous winter (this is 3-2012), and still do!  This is why I have raised beds. 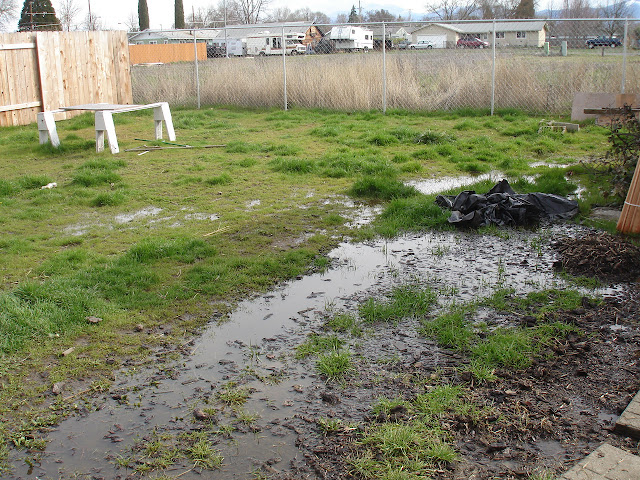 Same corner today!
The white square is closet doors killing the grass for a future "patio" area.
The empty field has duplexes, and the neighbor is building a tall shed. 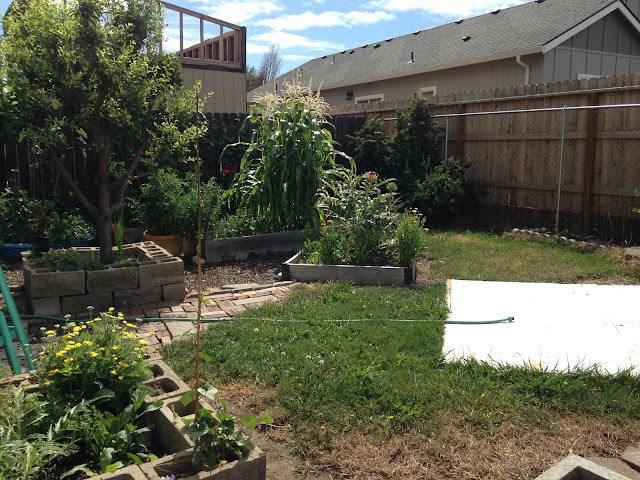 Ick... these shrubs were ugly and their leaves misshapen by disease.
It tore them out.  The soil here is very shallow due to cedar roots from the deodar cedar just out of sight to the right.  What's here now is "not much," which is better than before! 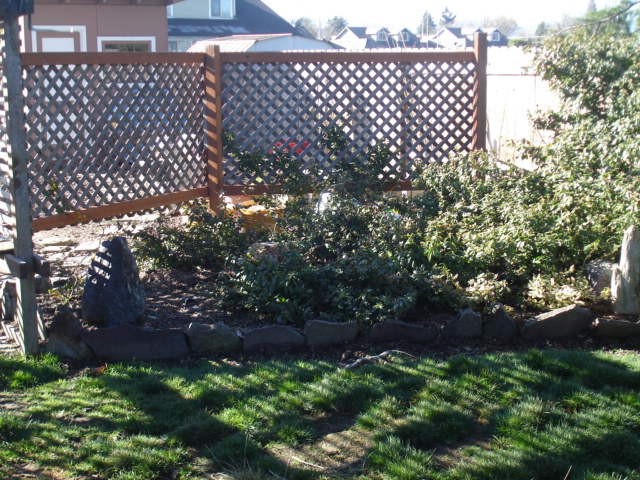 In March, 2012 the Herb Garden hadn't even existed!  This area was solid photinia, which took up way too much room (8' from the fence, and as tall as a tree, with only the outer areas live, the inner were like a hidden cave of dead branches), and I hate them, so it was one of the first things to go!  The blue paint on that trunk by the fence is where I wanted it cut. 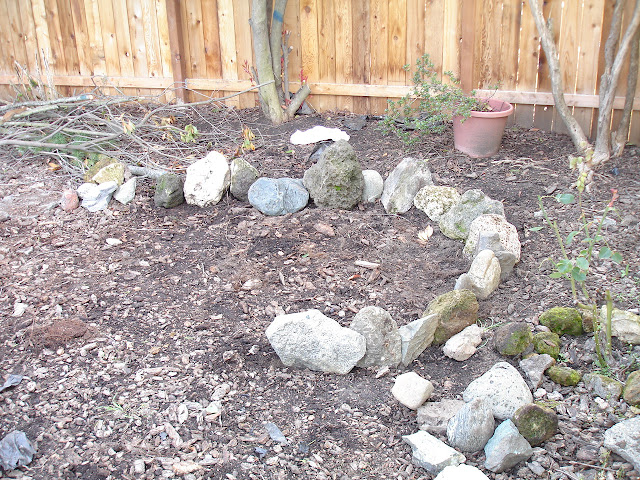 Awww... look at that teeny prostrate rosemary, if you can see it!  It's behind the daffodil leaves in the upper left corner.  It's one of the original herbs in the Herb Garden.  The sage lived four or five years (average before they get woody and need replacing), the lemon thyme was replaced in the same spot.  Daffodils still bloom from the bulbs, although the ones near the rosemary are hidden from view for the most part.  I think this photo was to showcase the new garden markers my daughter and I made with flat stones and paint.  They're still there!
I notice a basil up front there. As anyone who knows this blog has read before, I do not do well with basil!  What grows in that spot now is nutmeg thyme and onion chives. 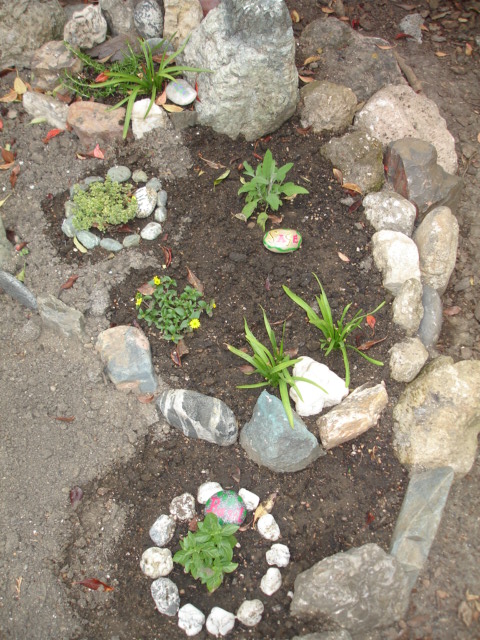 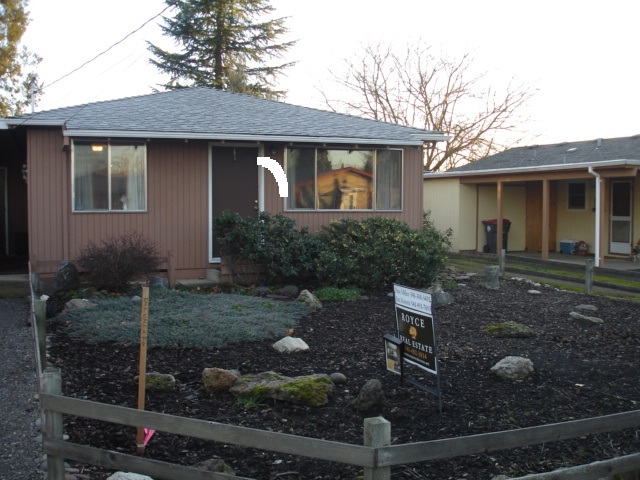 The rhododendron was pretty, but very old, gnarled and I hated the stickiness of them when deadheaded.  Look at that front door! It's like a cheap motel door!  Hollow core!
Door and rhododendron - gone. 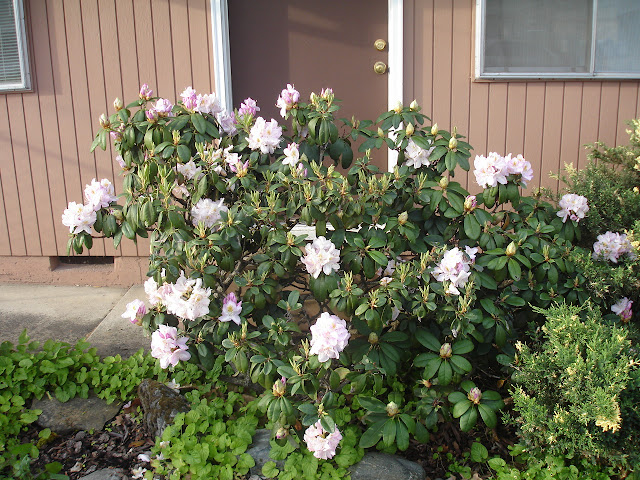 The old fence and gate.  Pecky cedar, painted with the house paint, rather a pinkish brown.  Pecky cedar is caused by a fungal infection that gets in the wood because of bark level injuries.  The infection decays the wood in vertical stripes.  I don't care for the look.  It looks... well, it looks decayed and infected!
There are those damn English ivy and bamboo.
Fence and gate - gone.  Ivy and bamboo?  Well, let's just say, "I have plans!" 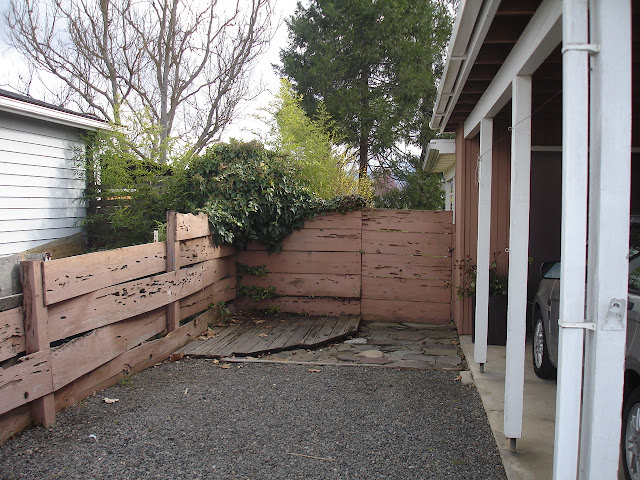 Some older photos from my garden in California.  Approximately a 20' x 20' raised bed that didn't produce well once the neighbor behind us stopped pruning their tree.  Every yard in the neighborhood had one fruitless mulberry tree and if they are not pruned they get huge.  We all had one of the same tree in the front yard too.  It was a very small yard.  Worked in 1983 when my oldest was turning two, not so much later on.  It was a rental, and I think we set some sort of record staying until 2011!  The landlord didn't do much, I didn't ask much, and the rent was lower than average, so it worked. 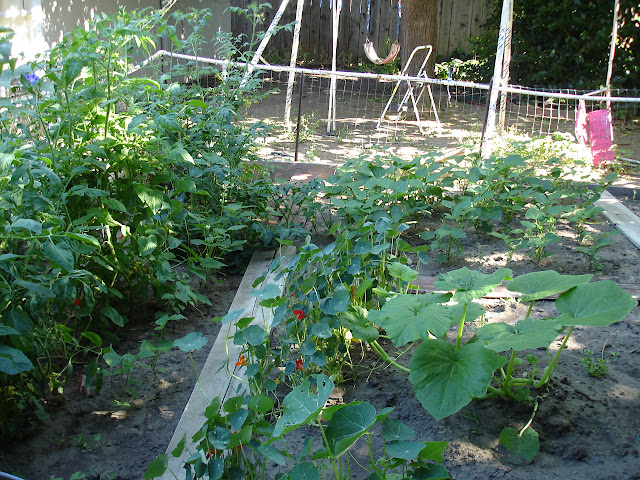 Both Cookie (the tall Australian shepherd and something tall and thin closest to the camera) and Sadie (Springer spaniel and Australian heeler) moved to Oregon with me.  Neither lived here long, but Sadie had a new lease on life in Oregon, she loved it here!  Boo wasn't yet a year old, which was why we got Edward the Goldendoodle, at 2 1/2, for him to play with.  But, Boo never "took" to him, preferring to be an only dog! 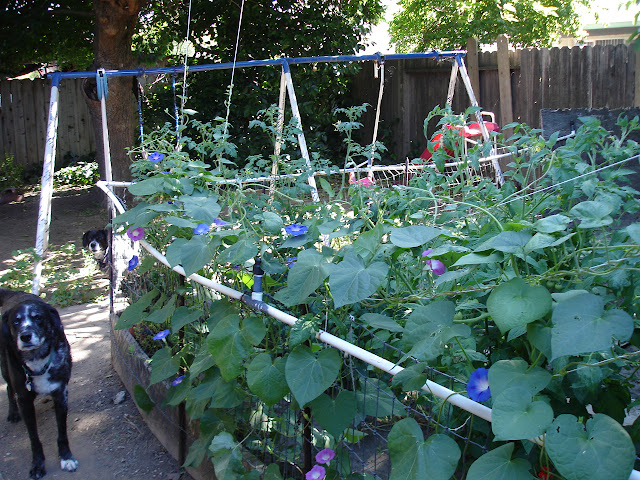 I enjoyed finding photos of my beginning garden here in Oregon.  I thought they were trapped on a desktop I don't use.