I would have argued I'd posted this paint-by-number I found at a Goodwill last autumn before, but I can't find it.  That doesn't mean it's not here,it means I might have neglected to label it.  Apologies if you've seen it before.

It's autumn again, so the subject is current once more!  And, not only current, but with shades of blues and reds, it's one to share for

I haven't found which kit this was, but the same image was available (still is on eBay) as a needlepoint by Sunset called "Brilliance in Fall."  It was designed by artist Kirk Randle, who also designed some paint-by-numbers for Dimensions by Paint Works.  I just can't find this one!  The Internet is usually more helpful! 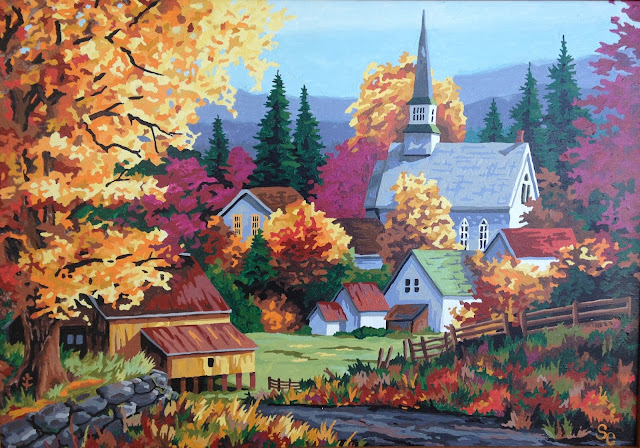 It's hard to find paint-by-numbers out in the wild, they are quite collectible these days.

Did you ever do any paint-by-numbers?
I did quite a few as a girl, all of them horses!

I didn't know it until a few years ago, but growing up we had an abstract still life on the kitchen wall.  My mother painted it from the very first paint-by-number designed, Abstract No.1!  It wasn't the first kit sold, the company owner hated it, but it was first one "invented" by Dan Robbins, and once paint-by-numbers caught on it was released.  I don't know when it disappeared from the wall, but it was not to be found anywhere when I cleared out the house for sale.

*****It's Monday, America!  Tomorrow's a BIG day!*****
Get out and vote if you can today.  If you live in a state with mail in voting and have the option of doing it in person, or dropping off your ballot in person, look into that.  There's the possibility ballots postmarked in time (legal in many states) but delivered after Tuesday will be challenged in some states.

Attempts to change election laws during an election is just not fair play.