I moved to Oregon with three dogs, a cat, two rats and a Guinea pig.  Not all "mine," but in the household, the rats were my son's and the piggy my daughter's.  That was late June 2011.  Here we are at the end of October of the same year, but there are four dogs!  What happened and why would I think four dogs were a reasonable number?

Blame "Baby Perfect" on the right there, Boo (Border collie x Australian Cattle Dog or Heeler).  He was just about to turn one when we moved here.  Cookie, next to him (part Australian shepherd and part something narrow and long-legged) was too old to play.  Sadie, next in line (Australian Cattle Dog x Springer) was both too old and did NOT play with Boo.  Notice the odd one out?  What's that Goldendoodle doing in my Aussie mix, besides looking cute? 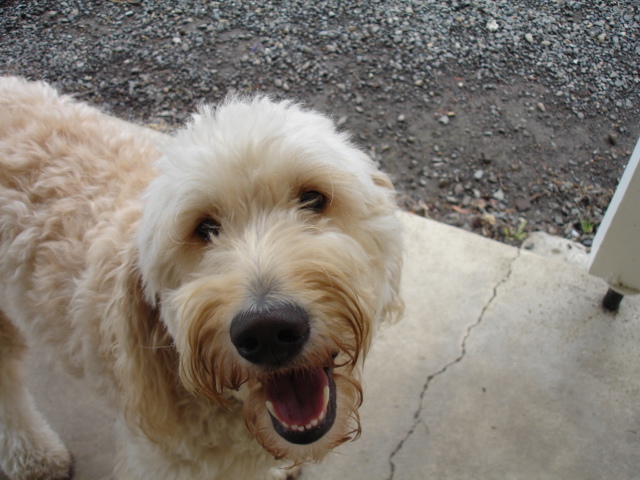 Well, as I wrote, Boo was young and energetic and needed someone to play with.  Forgetting my past lesson learned that Aussies and Border collies and their mixes do not like anyone outside their sort (they are pretty much snobs of the dog world) we got Edward, an epileptic, allergy prone (not to food), and thyroid problem-ed  Doodle for free off Craigslist.  Boo was also a Craigslist dog, listed free but I gave the man a bit for him as it was nearing the holidays and he's been laid off from his job at the NUMMI plant (now a Tesla factory) and couldn't afford to keep Boo.  He did come visit Boo once, and had his photo taken with him. He really loved Boo, who I  still often say is a "delight!" 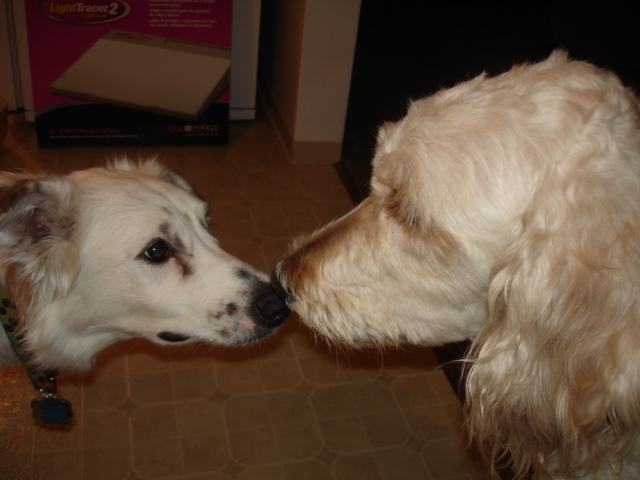 Boo was less than impressed and remained unimpressed for the next eight years.  The problem with Edward, from Boo's point of view, is he stole tennis balls and chewed up toys.  Edward would be put to bed a hour or so before Boo so Boo could play with his toys.  Boo would walk around the back yard holding his ball so Edward didn't get it.  Boo was on constant alert.  I feel guilty being responsible for him being more of a nervous wreck than most Border collies.  Now that he's the only dog, his quality of life is so much better!

Newborn Boo, back when he would be named Duke.  My daughter renamed him Baloo, but that was soon shorted to Boo. 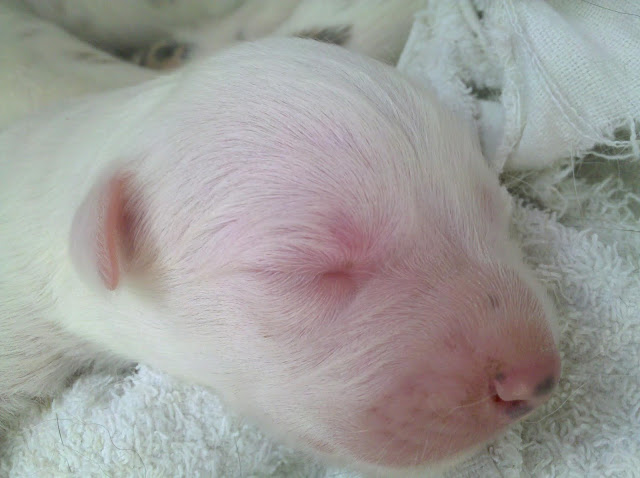 Edward was a card though.  Sweet, sweet, sweet... with people.  And dogs above a certain size.  Only he know what size was "friend" and below that was "food."  Meet a Labrador in the vet's office?  Okay, let him say "hello."  A beagle?  Maybe not, keep him away.  A pug?  No way!  Edward didn't receive medication for his seizures for his first 2 1/2 years of life (before we got him), as one of his previous owners thought it would "change his personality."  Seizures changed his personality by causing brain damage.  So, sweet, and very stupid.  He couldn't learn a single thing and didn't recognize if we scolded him or Boo curled his lip in warning (warning of nothing, Boo isn't a fighter).  We arranged our schedule around Edward's twice daily medication schedule.  Miss a dose, expect a seizure within 24 hours.  Edward lived for 10 years, which is quite old for a dog with epilepsy, his vet told us 8 is average.

But, Edward had a few bursts of odd intelligence.  He loved certain movies on the TV, for one White Chicks.  There's a scene with a dog that goes off screen.  Edward looked behind the TV for that dog!  Here he is watching a video of himself and his doggy siblings playing in the snow, and searching behind the computer screen for the dogs!

Cookie was Boo's race-around-the-yard-buddy when he was a puppy.  The day his owner/breeder brought him over to check us out Boo first bounced at Sadie, who wanted no part of him and growled.  He then turned to Cookie who twisted and twirled and raced off, Boo in tow.  Cookie entered our family due to Sadie being missing for nearly seven months!  She escaped through a gap in the garage door, while chasing a strange cat that had gotten in.  We searched, we went to the shelter daily, checking dogs and the "found dead" folder.  Sadie wasn't there, but Cookie was, wearing a green collar, but no tag or chip.  This was a kill shelter in a large CA county, and day after day no one was adopting Cookie.  Day after day we spoke to her, and she was so happy to get attention.  One day I just adopted her, called my husband, not to ask permission, but to tell him I was doing it.  That's the kind of marriage we had, we didn't need to ask when animals were involved!  He brought a rabbit home from work one day when another employee was going to feed her to a snake.
Cookie was an opportunist.  Gentle as a lamb... until another dog was in trouble.  Oh, she never started anything, but if they yelped, she'd jump in to cause more damage!  Sadie panicked one day and got stuck under a kitchen chair.  Cookie rushed in, bit Sadie on the haunch.  $800 later, stitches and a seeping drain in her side, Sadie came home to recover.  Cookie was back to gentle sister mode. 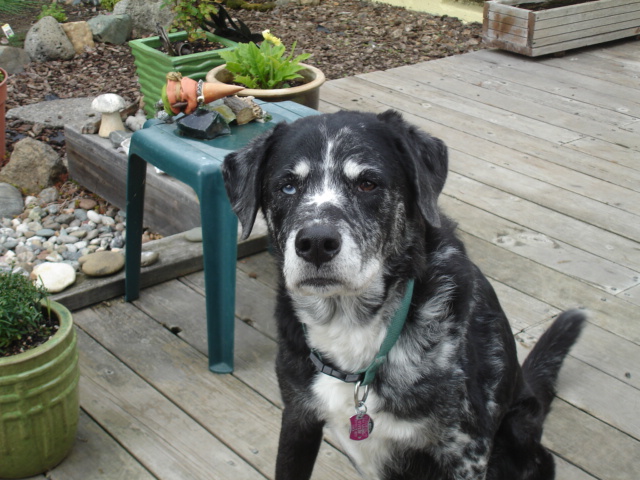 Back to Sadie.  She was weaned too young, only 4 weeks the vet said, so she was a pretty messed up dog!  After she'd been missing a few months, my late husband saw her early one morning on his way home from work.  She was living "wild" on the next street over.  Residents had seen her and didn't bother to report it to the shelter.  She was too frightened to recognize us.  It took months more before a neighbor called and said she was under his trailer right then.  She bolted, he chased her, and she returned to crawl under the trailer, where I grabbed her leg and pulled her out, clutching her to me as I put her in the car. The man wanted to refuse the reward ($200) but it was nearly Thanksgiving and I instead he use it for the holidays.  I picked up the family and we immediately took Sadie to the vet, as we didn't want her near the other dogs until she was given a clean bill of health. Underweight, but the only thing wrong was giardia, probably from eating cat feces and trash.  After she returned home she was much more loving to my kids!
Sadie didn't live in Oregon long, but she loved it here. She had the head of her spaniel mother and the stocky body of her ranch-hand Heeler dad! 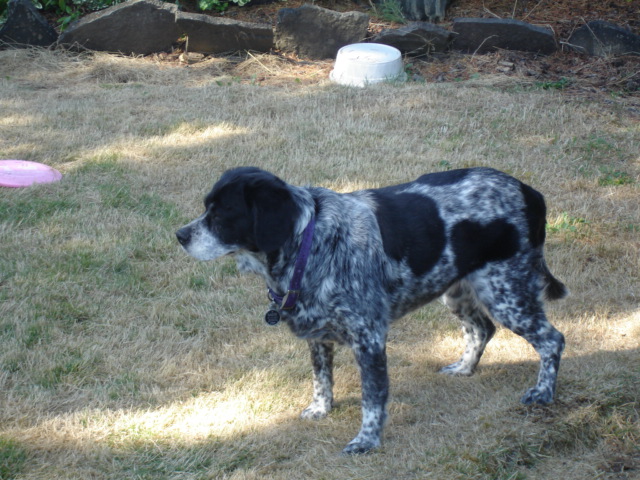 That's my long look back on the dogs I had here in Oregon.  There were others before them of course, heavy on the Aussie/Heeler/Border Collie crosses.  Just something about them!  The spots and the smarts and the personalities.
These flashback photos are courtesy of the old laptop files!  I'm having a bit of fun on this cold morning going through them.
Labels: Boo Cookie Craigslist dogs Edward Flashback Friday history off topic Oregon Sadie