It's been quite dull in the garden lately.  Nothing much to do, although today's #6 will provide a bit of gardening.   I did wake up to rain this morning, so that's something positive!
https://thepropagatorblog.wordpress.com/2020/11/07/six-on-saturday-07-11-2020/

Somehow I still have one immense cosmos that hasn't been killed by the cold nights. 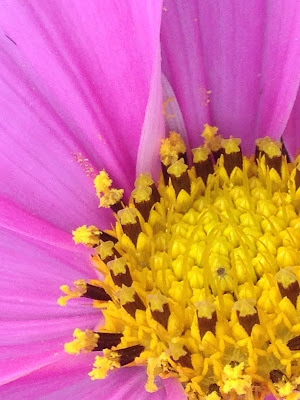 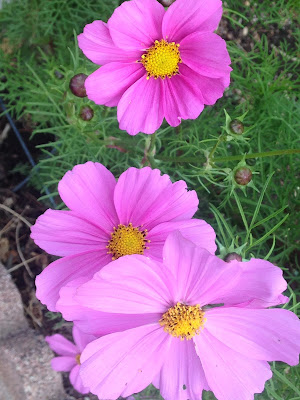 Rosemary is such a dependable fall and winter bloomer.  When days are warm enough for the bees to fly (usually around 55 F) rosemary's often the only flower around. 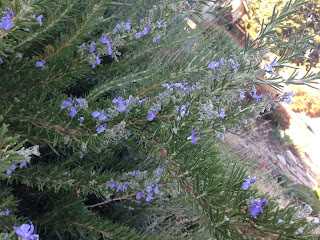 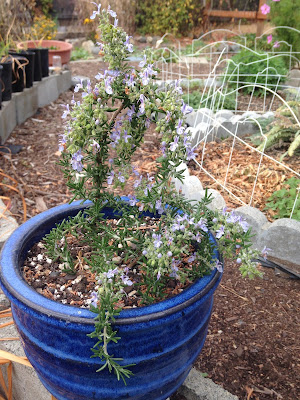 Above is Tuscan Blue, by far my darkest purple rosemary.  To the right is a prostrate from a stem I rooted.  It's taking on a perfect shape!  Quite reminiscent of Blue Boy, shown below.  Unless it sort of bonsais itself, it will need a bigger pot soon, unlike Blue Boy, a true tiny rosemary. 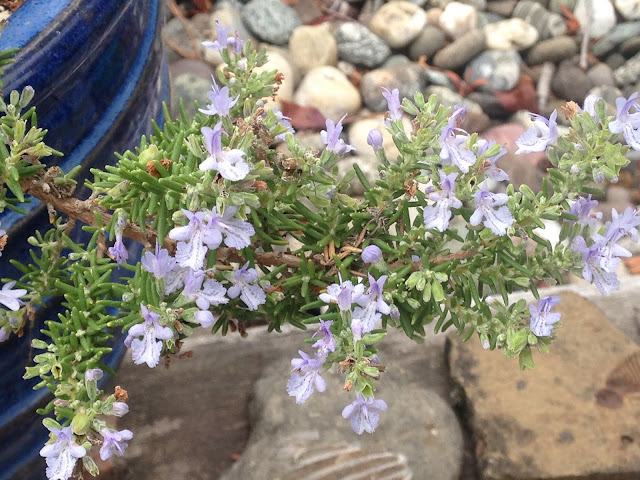 I don't have any trees that make a big splash this time of year, but there's what I do have.

Very pretty leaves on the 'Frost' peach, but the tree's diseased, so it might not be around next year.

On the right is forsythia.  As pretty as it is in spring and fall, I read that it's a fairly useless shrub to have if you're interested in helping the pollinators.  After I read that I realized I'd never seen any bees on the flowers. 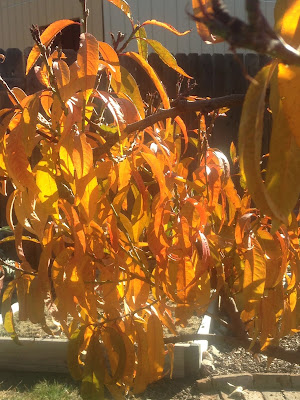 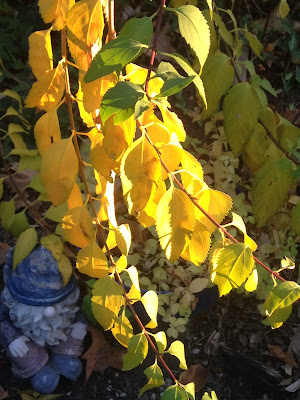 3 - Honey Bee
A pollen laden honey bee.
This one was so overloaded it wobbled when it flew!  Want to provide for bees once the garden is bare?  Leave those dandelions! 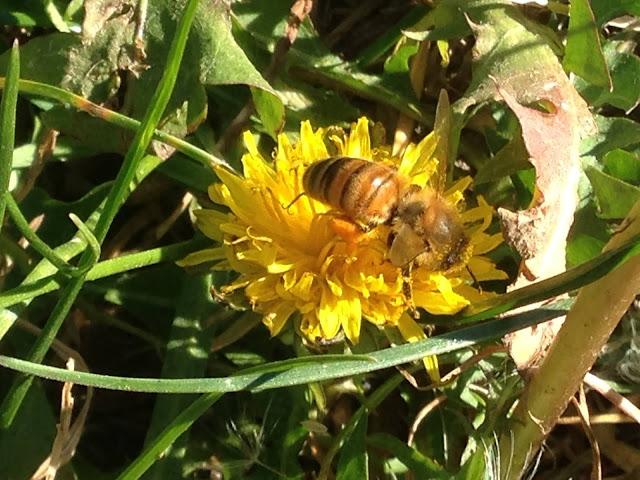 Calendulas are pretty near never-ending.  These three are from self-seeding this past summer.  Pacific Beauty mix was originally sown.  The 4 x 4 bed is now pretty much just calendulas and one artichoke! 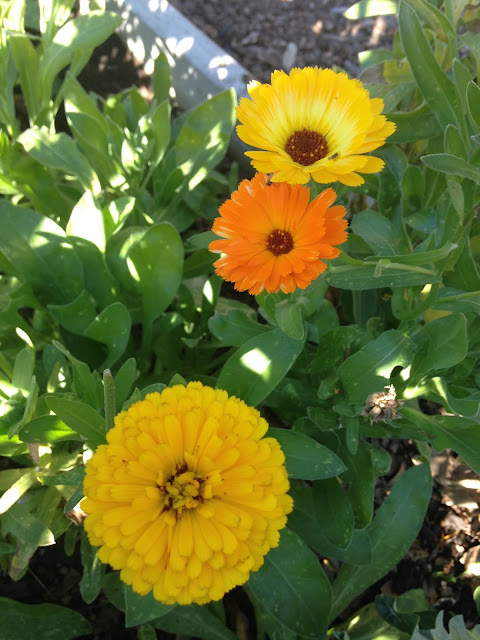 5 - Gaura
This is the time I usually cut the gaura back to the ground, but it's never been so beautiful, so red, before!  I'll leave it for as long as that red lasts. 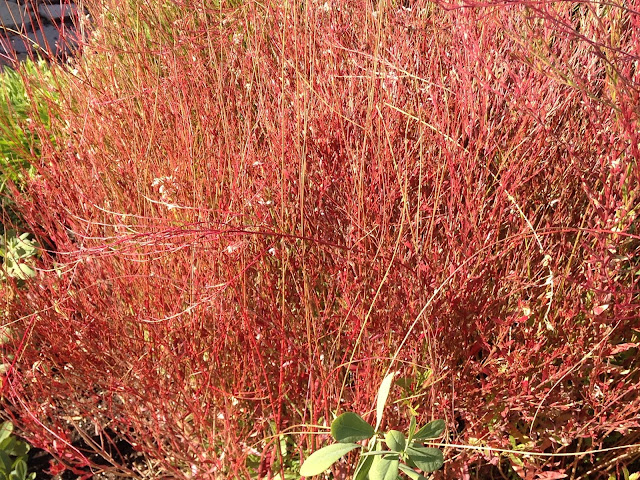 6 - New Bulbs
My new daffodil bulbs came yesterday.  More Original Poet's, since I got them last year and loved them, and Rip Van Wrinkle.  I had some certificates to use, which wasn't a positive thing, since I got them as refunds due to dead plants last year.  Breck's.  I like their bulbs, not their plants.  But, at least I found something I liked, even if I had to pay postage.  Things are tight this year, there were no free shipping days (not "free with $50 purchase" really free even with a minimum purchase).  Original Poet's must be in demand, they only send them out in fives, not tens like the others. 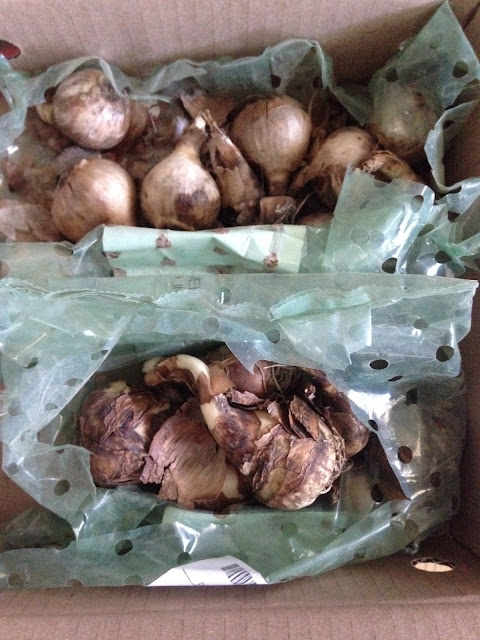 The box is pretty cute... 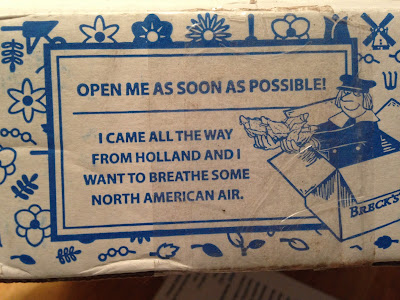 Hope you're enjoying these early autumn (or spring in the southern hemisphere) days!
And, America?  Hang in there, it will all be over soon.  Or, as my mother used to say, "It's all over but the shouting," and I think we're in for a lot of shouting!
Labels: autumn color bees Brecks bulbs calendula cosmos daffodils fennel forsythia gaura peach pollinators pretties Six on Saturday weeds