Yesterday couldn't have been nicer, yet today is back to gray skies and, according to Alexa, rain.

I did get a lot done yesterday.  I'm surprised I'm not sore this morning (a morning that began an hour earlier than I thought, since I forgot it was time to "Spring Forward) since it had been quite some time since I did yard work.

I mowed the lawn area off the deck.  It used to be a lawn, when I moved in it was a nice manicured lawn, but ten years and four dogs later it's not.  It's grown (no pun intended) so lumpy it's hard to push the mower over it.  I'm not a lawn fan (in fact, I'm strongly anti-lawns in the front yard - water wasters that don't get used), the far back one is being replaced by garden beds. 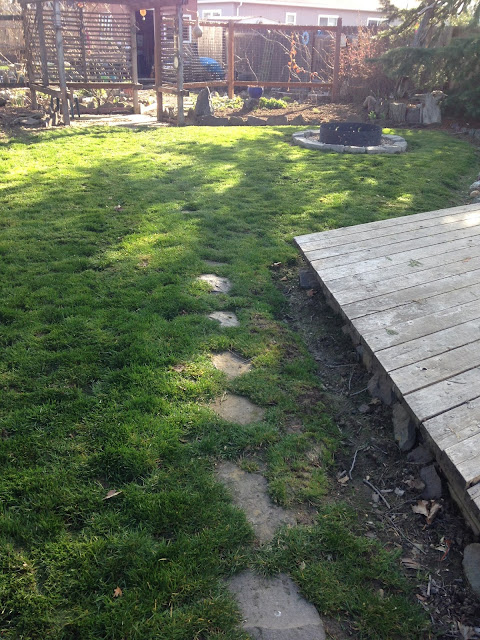 Got the latest bunch of dead branches broken up and into the green waste can.  This is where I drag them until disposal.  In the background you can see the wintersowing jugs on a table.  That is explained below.  Yes, the fence if falling there on the left.  The neighbor is going to replace it from there towards the front of the lot.  I never had it built all the way when I bought the house, since there is a mess of bamboo and ivy that held up the old fence. It's now pulling it down. The neighbor says he'll be able to remove the ivy amd bamboo!  Yippee! 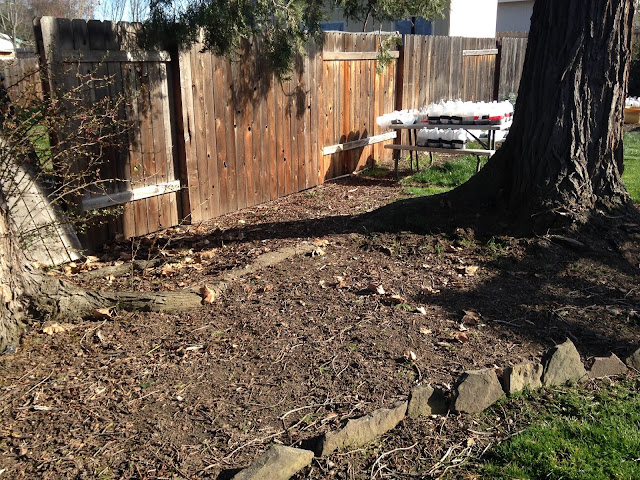 Weeded this area.  It took a hoe, not my "push-me-pull-you" weeder hoe thing.  Most of the weeds were settled in lawn grass.  Make sure that your grass is totally seed-free if you're going to use it for mulch!  I only thought it was, and it was hard to get out.  This soil is nice, it's mostly rotted cedar needles. 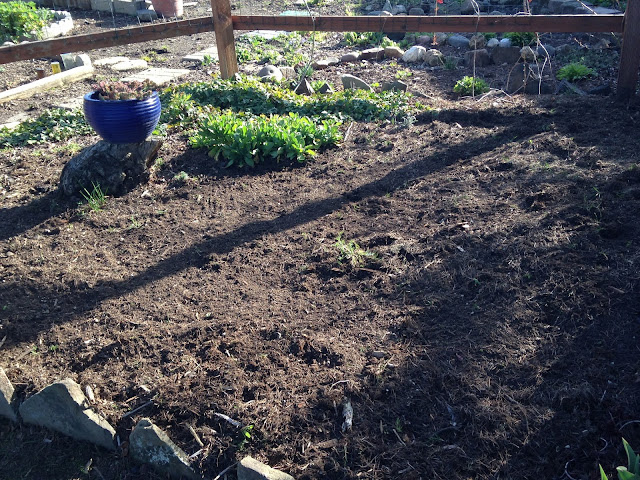 I took some of it, and needles, to mulch around the blueberries. 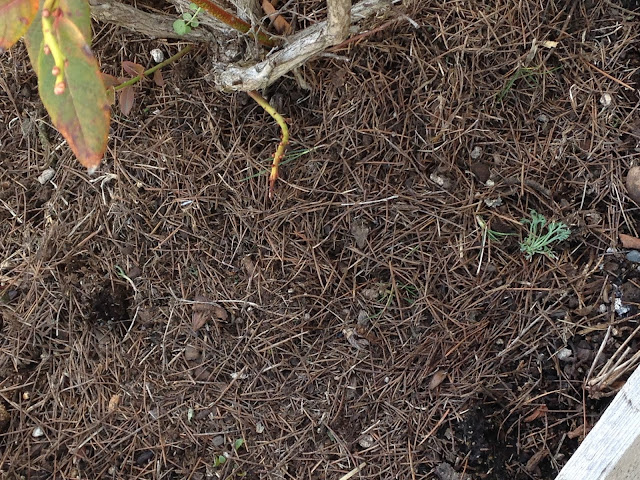 The wintersown containers were organized by germinated, germinated enough to sun, and still waiting. These are the still waiting, with the ones to the left of the divider the later sown seeds, the more tender ones. 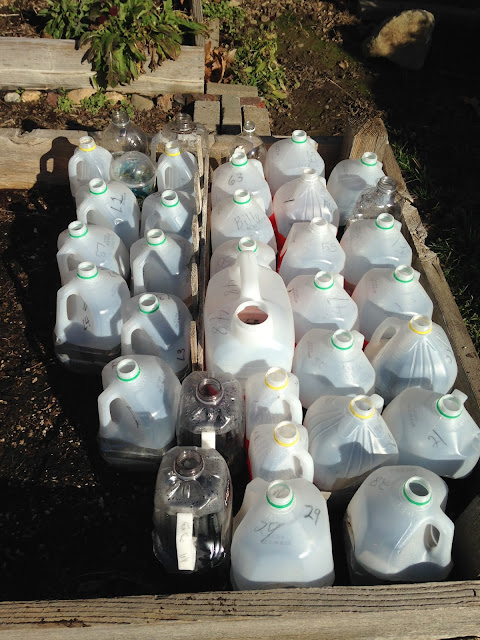 Germinated and germinated enough to sun are on the old picnic table. 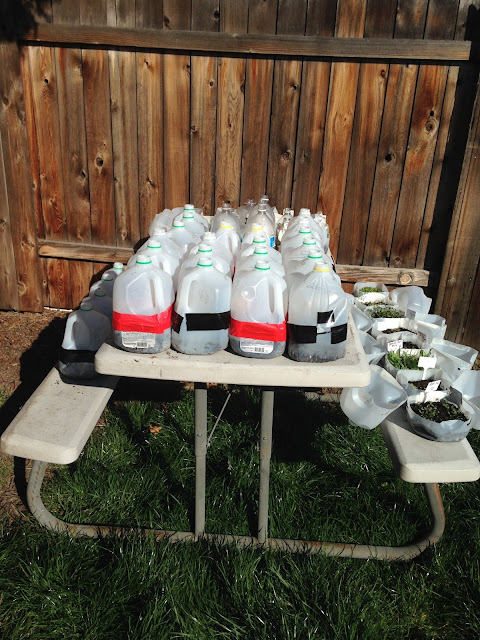 The germinated enough to sun group.  I left them open last night because it was only getting down into near 40, but the nights this next week will be below freezing, so their covers go back on tonight.  Some are big enough to be planted out. 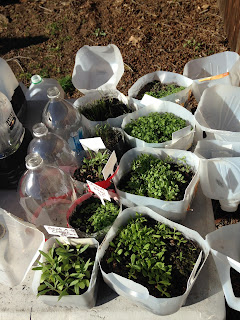 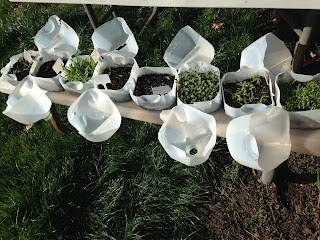 The grass is so long in the far back, but too wet to mow, I mowed a path to walk on! 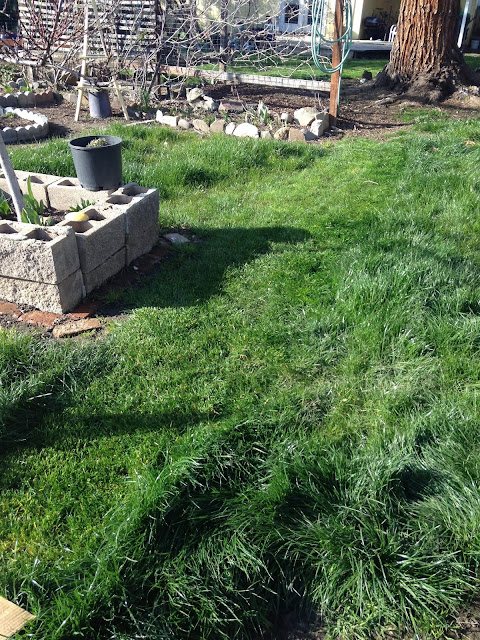 I ran out of steam while attempting to fill in the useless rain water diversion pit I dug. The lemon balm will no doubt have survived.  I'll tell you, it was sad to fill this mud hole in.  Boo had walked through it and left deep foot prints I hated to lose. 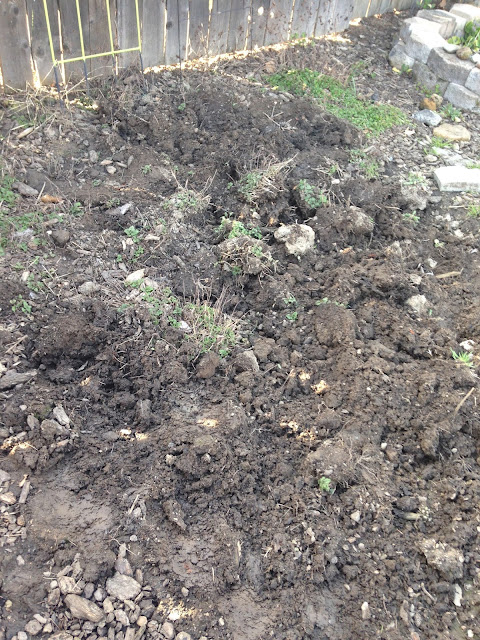 The piled up soil must have been pretty nice stuff, it was filled with worms, many of them this size! 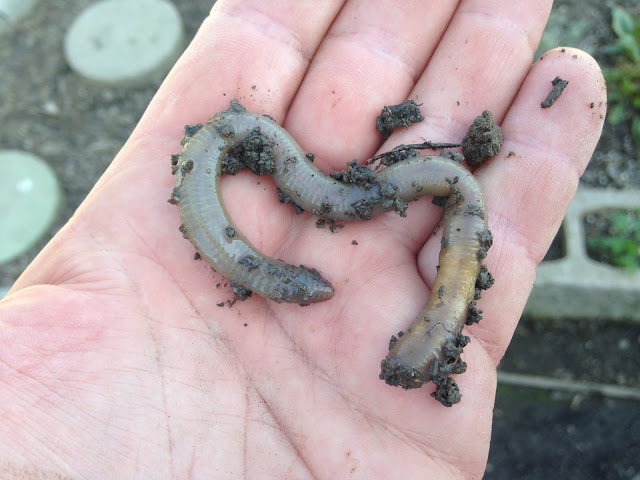 Not yesterday, probably Thursday, I changed my mind about the beds at the far back fence.  Out with the curved topped edgers (or curved sides, if you nest them, here I was setting them upright like tiny tombstones) and in with the curved edging, alternating curves.  I've decided to plant the raspberries somewhere else.  Here?  Not quite sure.  Something that needs support, or climbs to use the chain link. 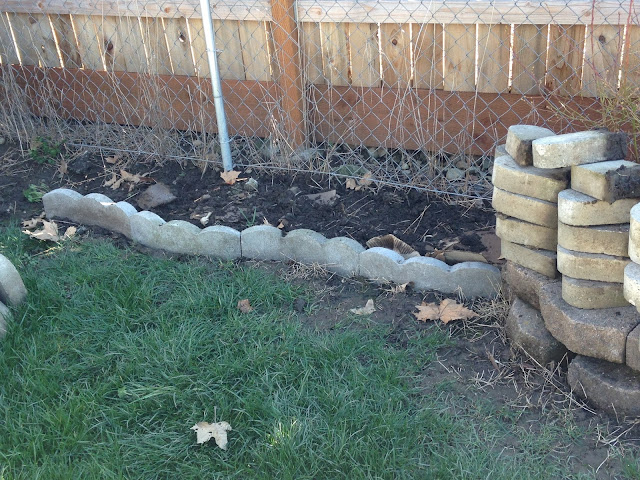 I think I might have stuck the labels in wrong. The bigger ones are labeled "mini" and the small ones "wonder."  They are Wonder Bell and Mini Bell mix.  I've never had success growing my own sweet peppers from seed, so this will probably be my last attempt. 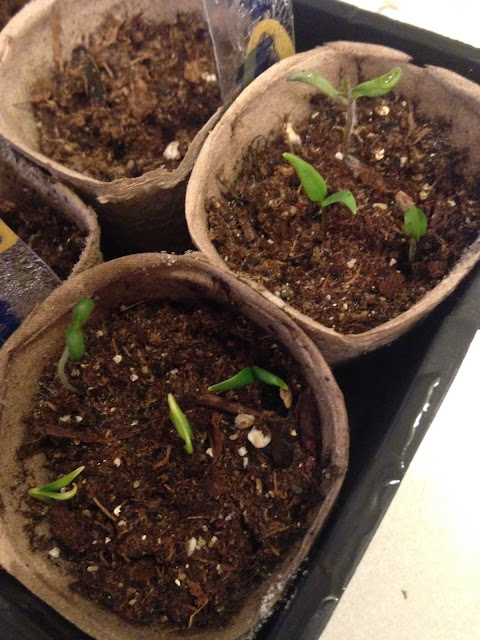