Happy First Day of Spring to us in the Northern Hemisphere.  Happy Autumn for the rest of you.
"There is no time like Spring,
When life's alive in everything,"

From Edna St. Vincent Millay's poem Spring (she wrote another of the same name, more specifically about April).

It's my first Six on Saturday since, according to my notes, December 26th!  Well, it's been winter.  It's been muddy.  It's been dark and gloomy and not much happening in the garden.  The White Queen may have been able to believe "six impossible things before breakfast," but I couldn't find six garden things!

My first three are fruit trees in bloom.

1 - a very unhealthy Pluot - I'm letting it go this one last year, no spraying, no pruning, just seeing it flower and maybe set fruit.  Borers and gummies and all things that get plums and plumcots. 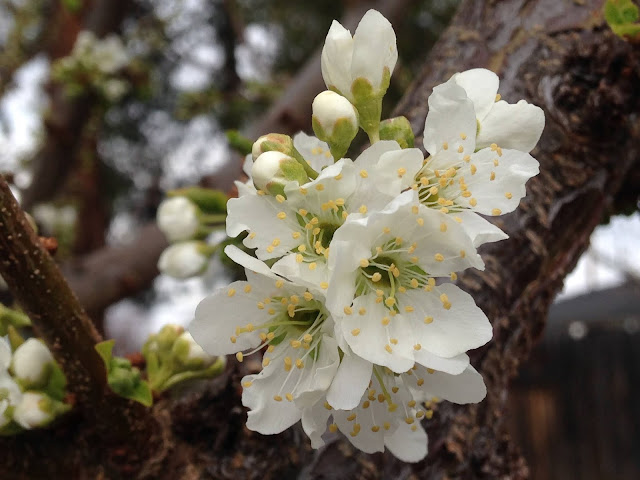 2 - flowering plum in a ceramic pot on the deck - I've mentioned this one before, I got it from a former co-worker, whose son planted a pit from a plum he'd eaten.  It's a flowering plum, which do have fruit, just small ones.  Not this one though, maybe some day. 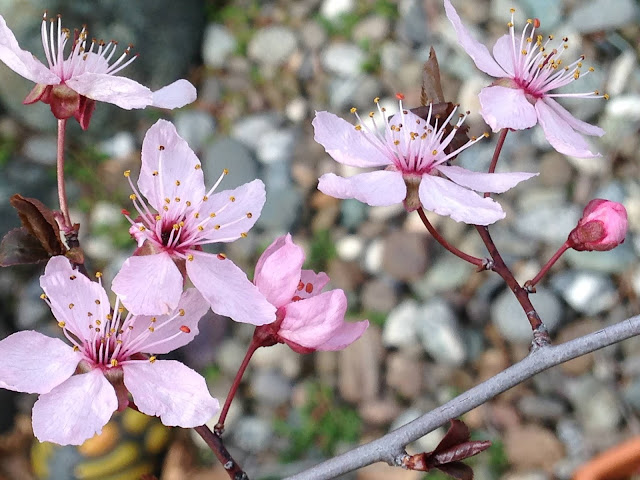 3 - plum under the cedar - it's getting more sun, not as much as it should, but more since I trimmed the cedar back and tore out a lot of bamboo. 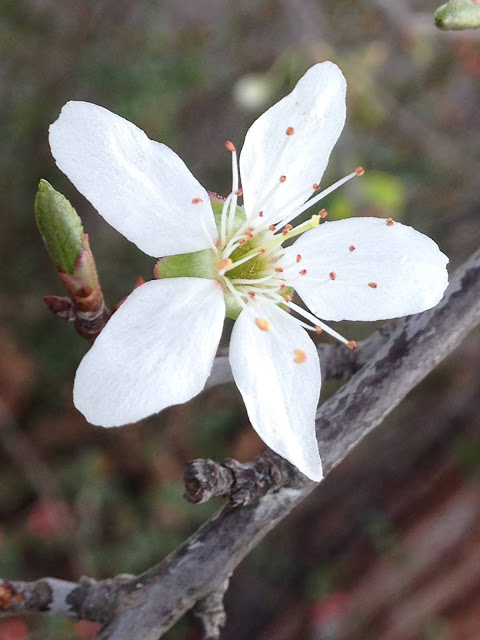 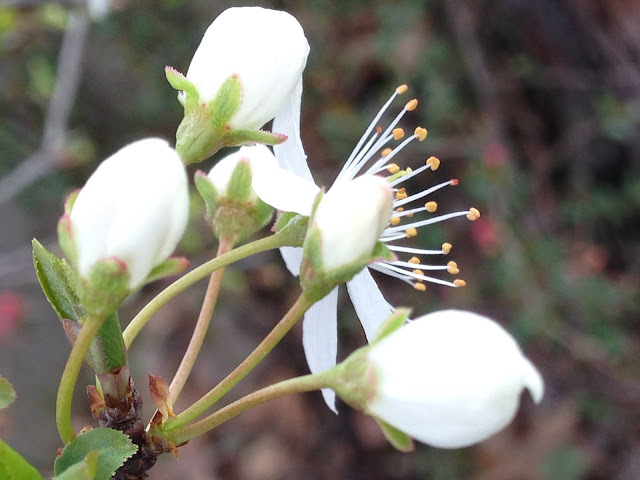 4 - a tulip - whoop-de-doo!  The first of the 100 tulip bulbs I won back in autumn.  I planted 50 and gave the other 50 away.  As many of you many recall, or not, I am not big on tulips.  Which is an understatement.  I don't like tulips.  And this one is the same kind and color as the ones that appeared in a fruit tree bed.  It's one of the Darwin Mix of reds, orange, pink, yellow... I'll probably get nothing but red.  Because that's what I like the least. 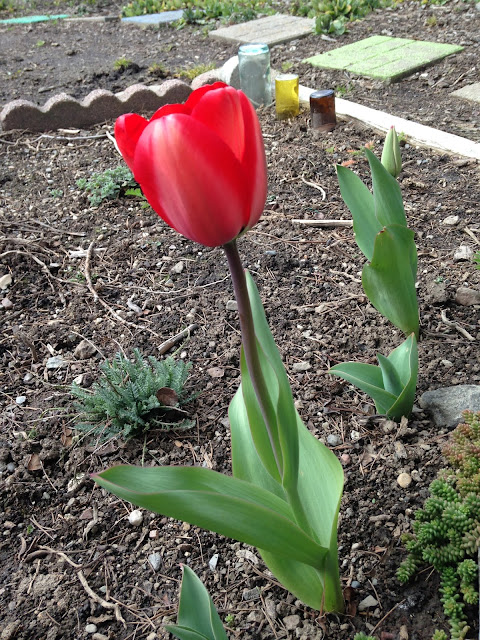 5 - my favorite weed! - yes, I have a favorite weed, it's the purple (or red) dead nettle.  A mint relative, which may have something to do with my fondness for it. 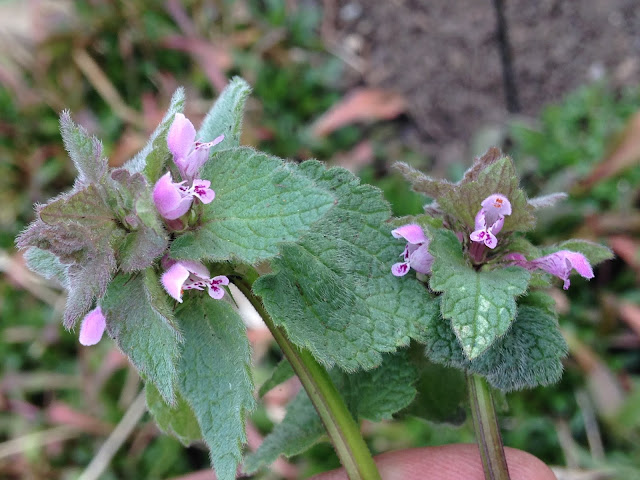 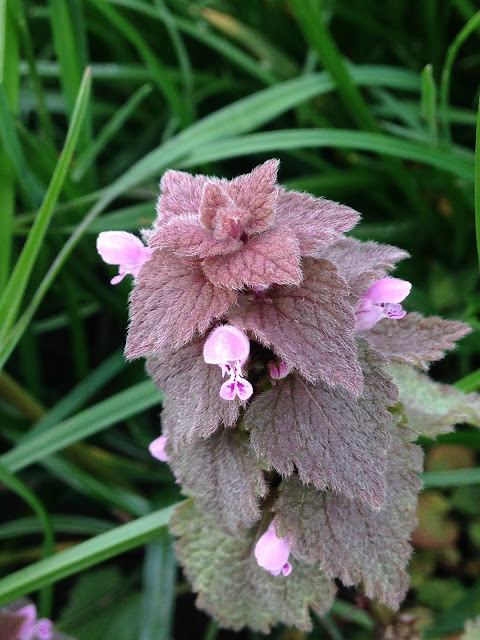 6 - Giant Western Cranefly - wow, this is nothing like my usual craneflies!  This native is the largest fly west of the Rockies.  My family always, through generations, has called craneflies (no, not "mosquito hawks") miggley-hinx (or migglie-hink, I have never seen it written).  Pronounce that as "miggle" "eee" "hinx" as rhymes with "jinx."  I don't know why and I don't know if it was regional or some ancestor made it up.  But, the reddish ones that get in the house in the summer and get stuck in corners of the ceiling and wall are so much smaller.  I'd hate to have one of these bashing around!  Did you know that adult craneflies don't eat?  Well, most of the kinds don't. They are born to mate.  There goes that name "mosquito hawk," and even those that eat NEVER eat mosquitos!  That's it.  This Giant Western Cranefly was waiting out a high wind by clinging to a tulip leaf. 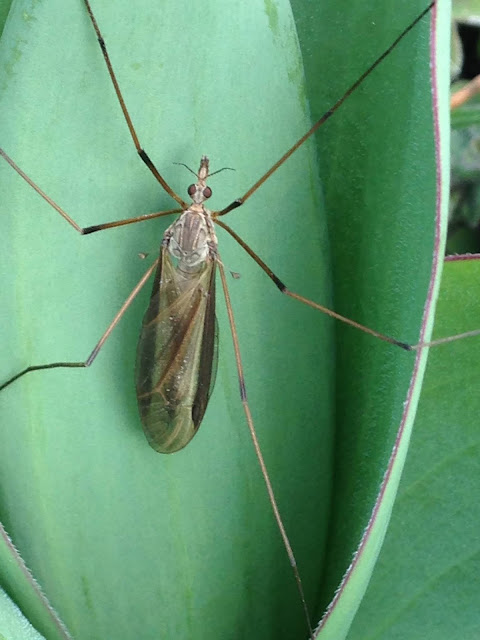 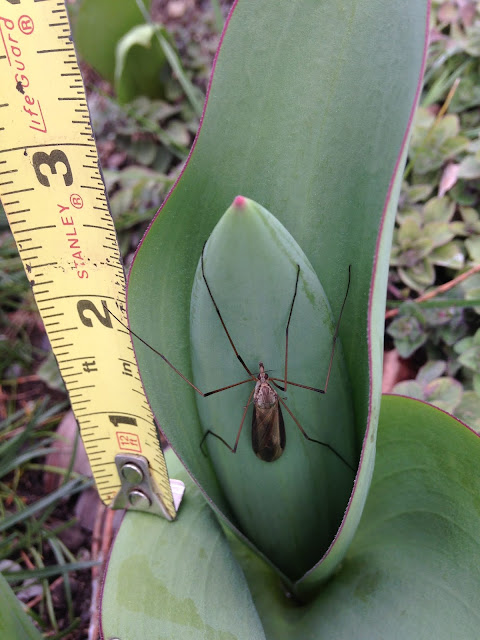 Get a load of that... nose?  Mouth?  I wonder why they evolved with such a big one if they weren't going to eat?  Do they dig out of an underground burrow when adult?  I don't know. 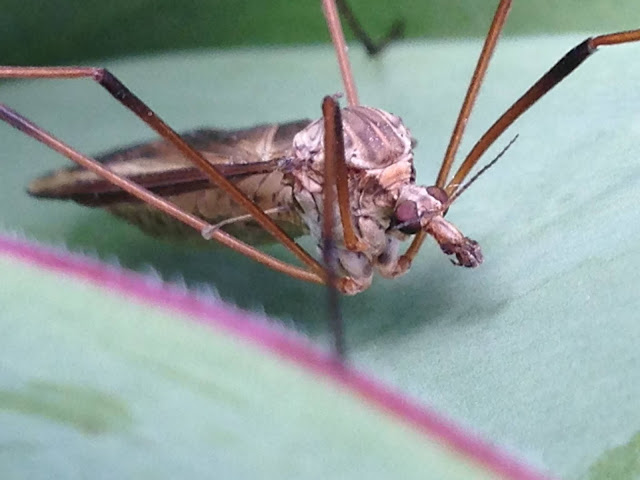 So,that's it on this first day of spring.  I hope to be back next Saturday, and each Saturday from now on until the garden is dormant again.