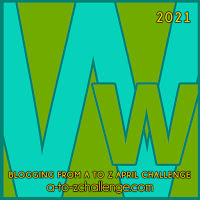 I've grown three kinds of wallflower.  The first, a red one, is a perennial I grew from seed.  Beautiful flowers, but such an ugly plant when the flowers died I pulled it out. 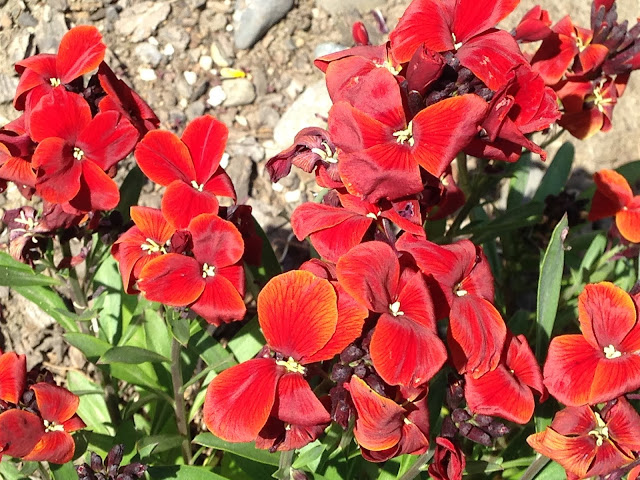 Commonly included in pollinator seed mixes, the Siberian wallflower blooms its second year.  Mine are biennial, some are short-lived perennials.  They get big, so I don't encourage them, and only allow one or two per large bed remain. 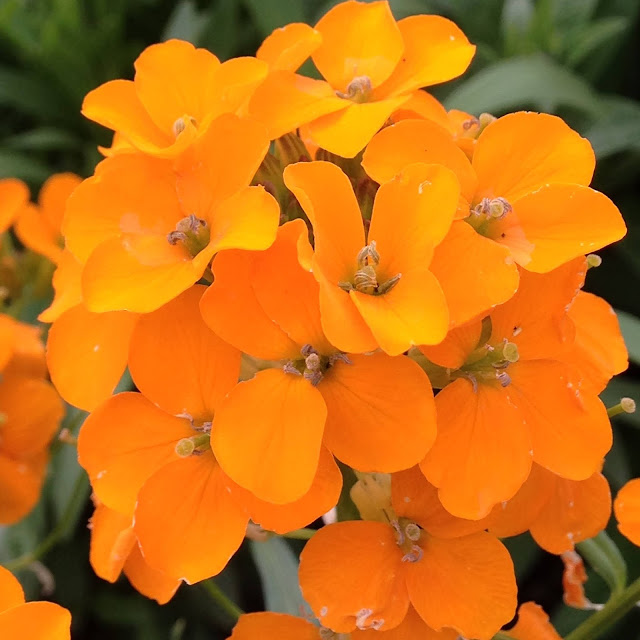 I think this is Orange Flame.  It's a perennial, very hardy, which spreads and can be propagated from small pieces rooted in water or in soil.  Mine is one of the original plants in my herb garden, and it's crawled nearly out of the bed! 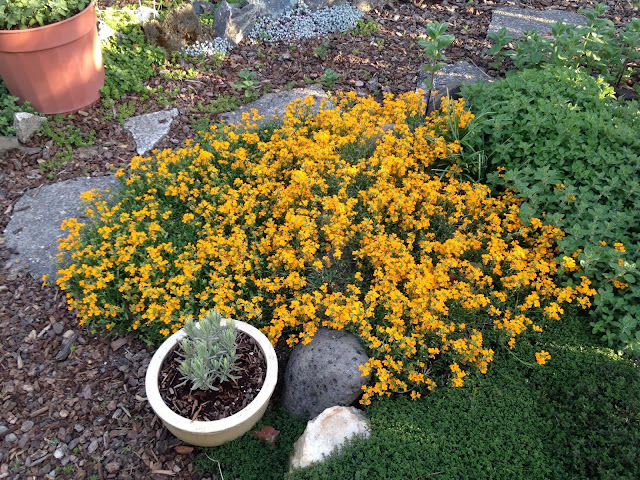 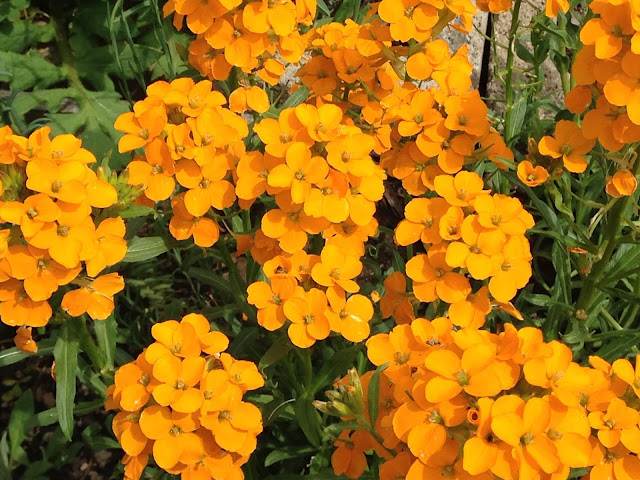 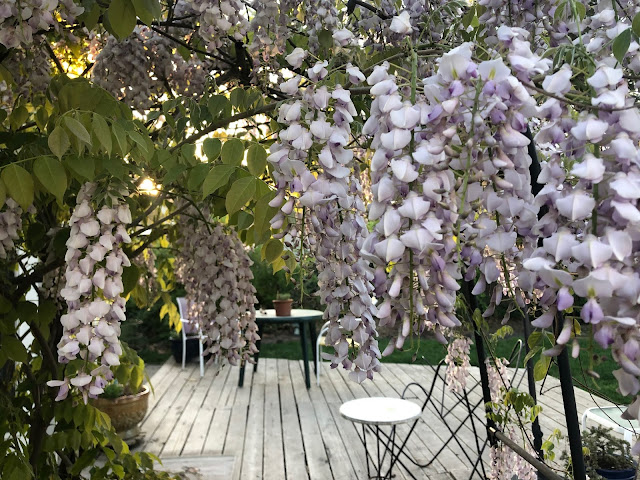 One of my favorite plants, wild basil is not basil, although both it and basil are members of the mint family.  It grows super easy from seed, and volunteers too, although not aggressively.  It pops up in other places in its bed. 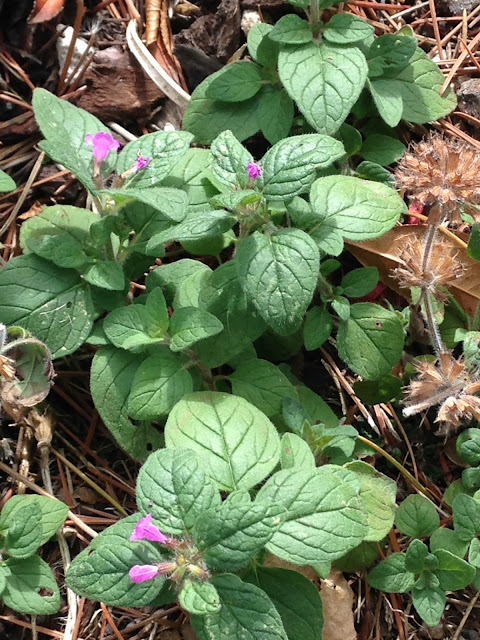 In summer the flowers grow taller and mingle in with my coreopsis. It has beautiful mint or catmint type flowers blooming all around an orb shape. 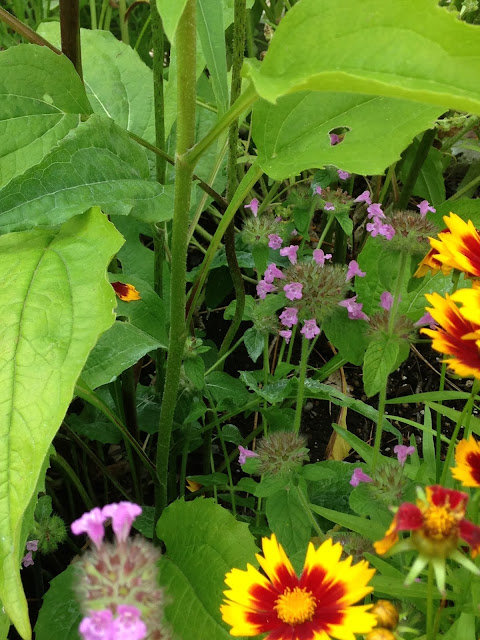 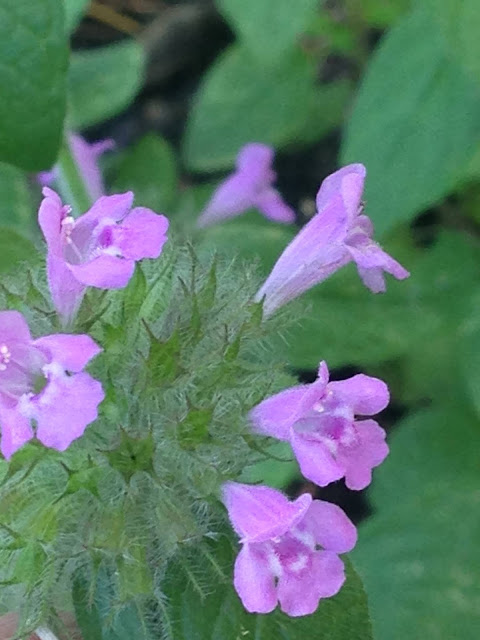 There are quite a few weeds with lovely flowers. Some I remove, others I leave be. All these weed photos were taken in my far backyard (far backyard is the part of the yard not near the house, where the beds are, separated by a partial fence). 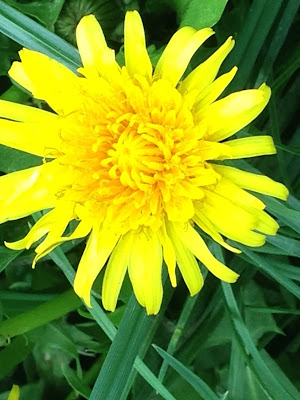 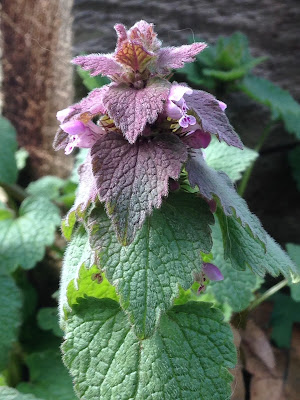 Gorgeous, but pull them when the plant is still small, as they get very strong taproots that are hard to remove. 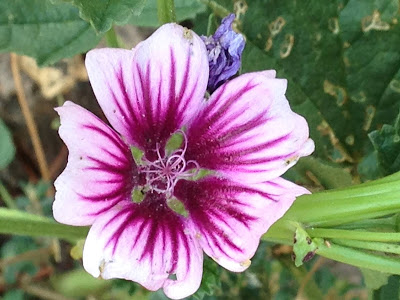 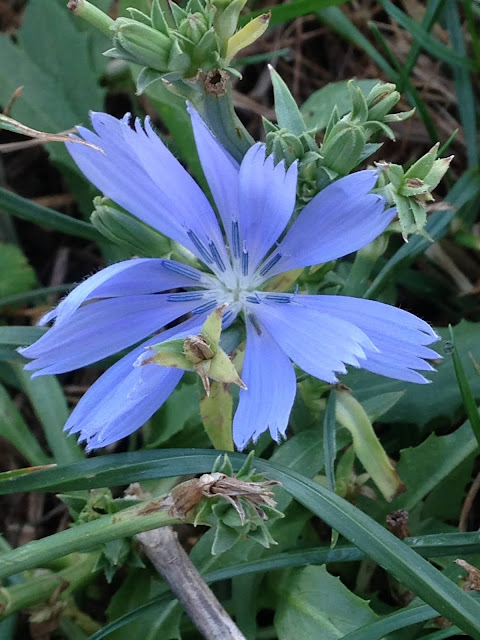 An edible weed said to taste a bit like oysters. 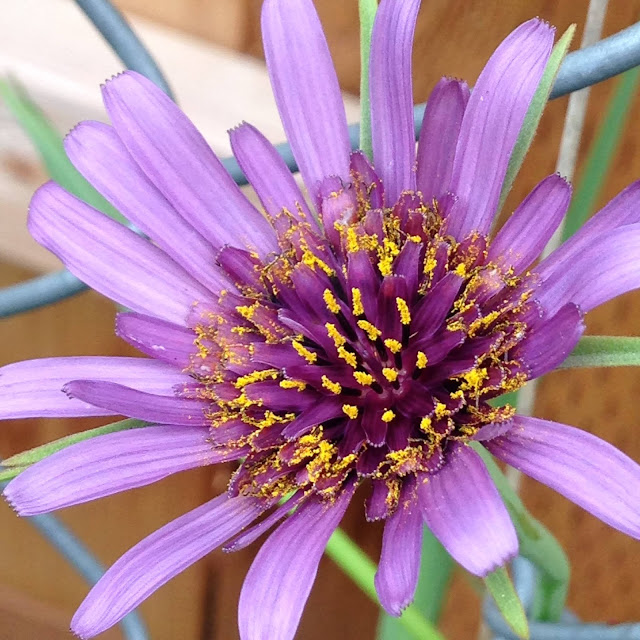 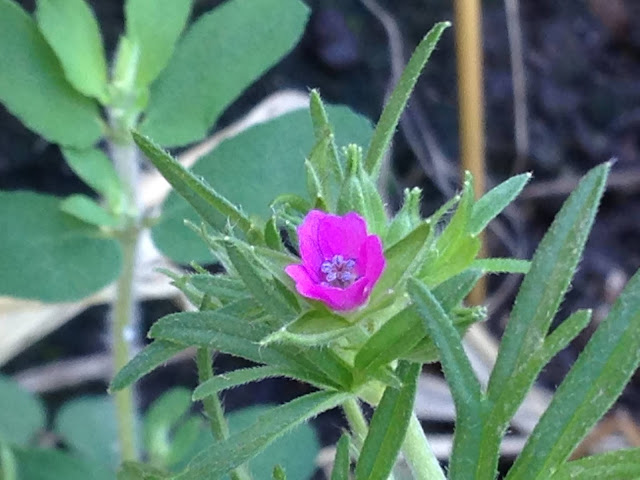 A horribly ugly plant which produces thousands of seeds, and leaves a sticky residue on your hands when you've pulled it out.  But... look at those adorable flowers!  I do NOT let this weed remain! 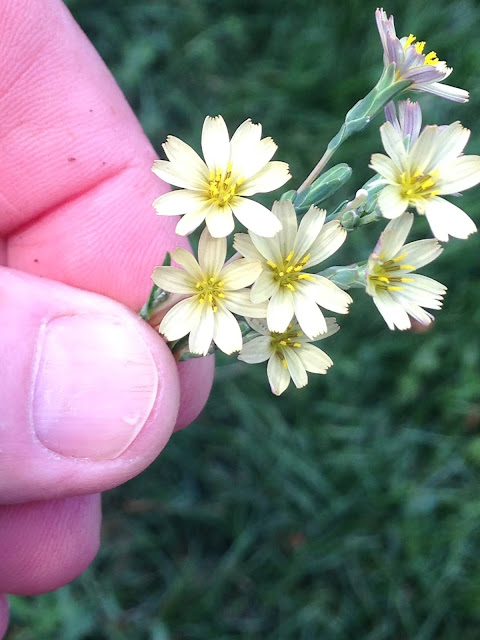 Even the plant is pretty on the speedwell! Bittercress is the worst!  Too small to pull until it's too late, and the flowers spring their seeds all over. 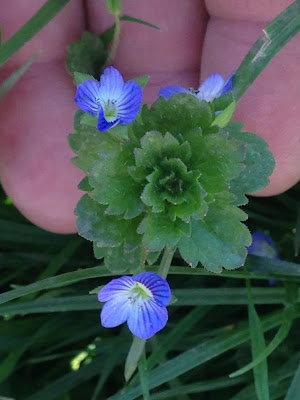 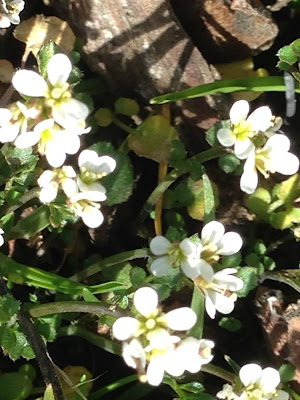 NOT a weed to let hang around to go to seed!  Each plant can produce 6,000 seeds that remain viable for years!   Side by side with a dandelion it's easy to tell the difference. 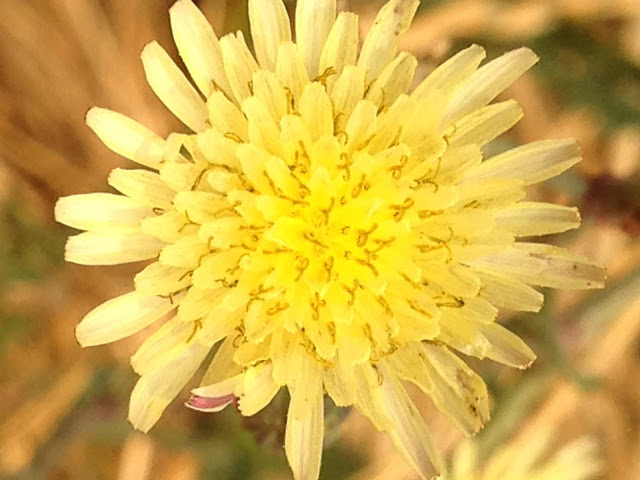 This single plant appeared in my blueberry bed one year.  The flowers look like chamomile, with without petals.  It supposed to smell like pineapple when crushed, and taste like it too.  I didn't think so.  One came up in a wintersowing jug, and I transplanted it to the Pollinator Garden.  Just a few days ago I saw it forming a flower, and pulled it out!  It was a pretty seedling and I thought it might be something I planted! 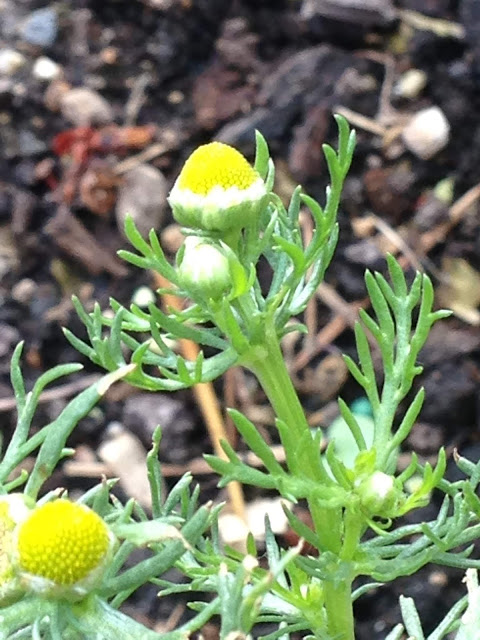 This isn't what I grew up calling "chickweed" in CA, which was actually scarlet pimpernel, or rarely, blue. 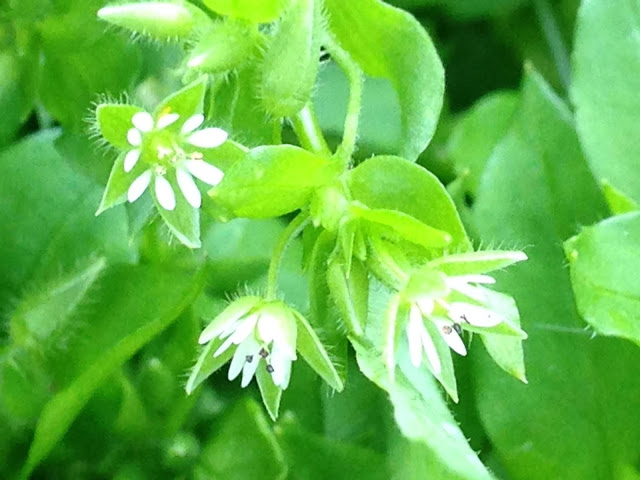 See the pointy seed green seed pod in the upper left?  Take two of those, slit a tiny hole halfway up through one, slide the other through, you have scissors!  I made these as a child, and we called the weeds scissors plants. 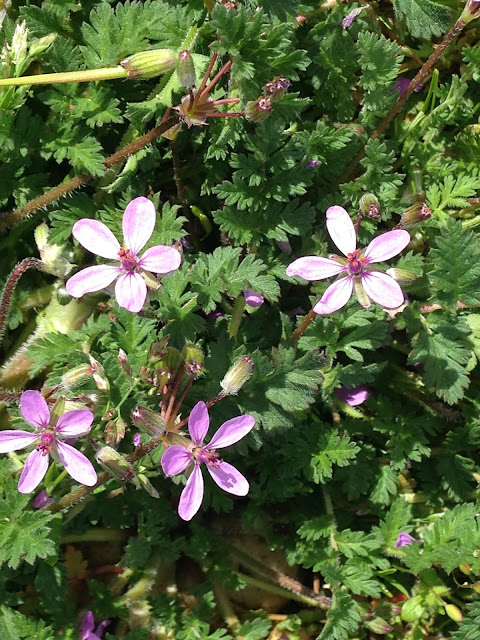 Don't expect much tomorrow, it's X!