Random stuff, including blue and red, for it's Blue Monday & Ruby Tuesday Too!

I grew the Double Dynasty from seed this year.  The coreopsis is one of two that have the ruffly double petals.  I don't know where they came from, unless they were part of the Dollar Tree mixed seeds, which included "perennial coreopsis." 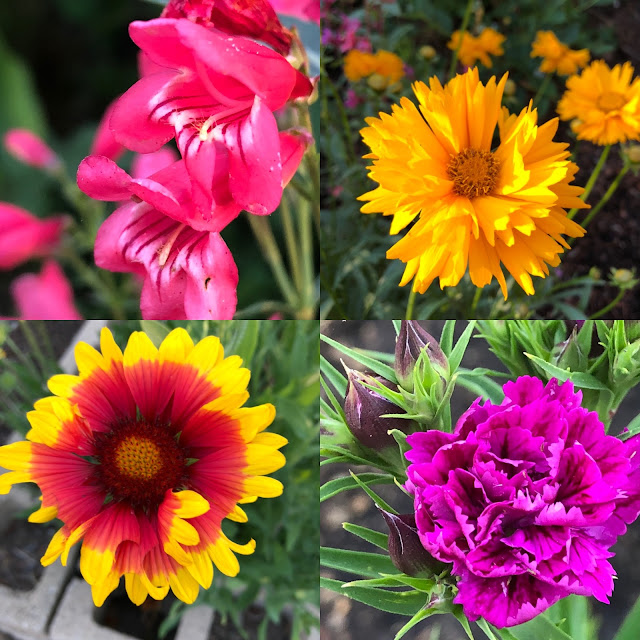 My blueberries on the bushes are looking good, so I thought I'd better finish eating last year's berries, which I'd frozen.  My favorite way to use blueberries is in muffins.  No, probably blueberry pie is my favorite, but I'm the only one here who would eat it, and I don't want to eat an entire pie!   Here's my updated recipe (the last one posted wasn't precise as to milk amount).

3/4 - 1 cup blueberries (I like to use them frozen, they stir in without breaking up and turning the batter blue)

Mix dry ingredients in a large bowl.  Mix wet ingredients together and add to dry along with the blueberries. Stir until just mixed, over-stirring makes muffins tough.

Grease muffin tins, bottoms only (muffins "climb" the sides) and fill each with 1/12 of the batter.  Sprinkle with sugar if desired.   Bake 400 degrees until tops are browned.  It's about 10-15 minutes, but I find my ovens have differed so check at 10 and keep watch.  Remove from pan right off or they continue to cook. 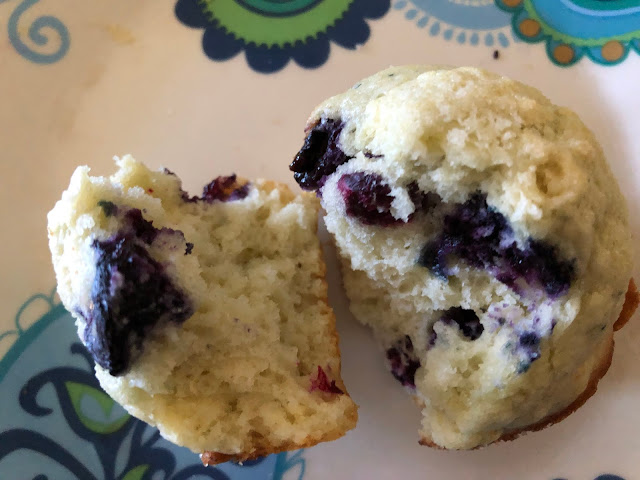 On my visit to St. Vincent de Paul I found this 1950's Napco (National Pottery Corp.) planter in the shape of a smoking pipe.  At first the company made their own pottery, mostly vases, but after WWII they started importing from Japan to meet the increased demand for cutesy decor.  They also made those planters shaped like women's head.  I'd love to find one of those!  My father had one of these pipe planters, in a darker brown, as a pencil cup on his home desk.  I guess it probably held a plant originally, or even his pipe smoking supplies or as an ashtray, but by the time I was old enough to notice, it held pencils and he no longer smoked.  This one is too clean inside to have been used as a planter. 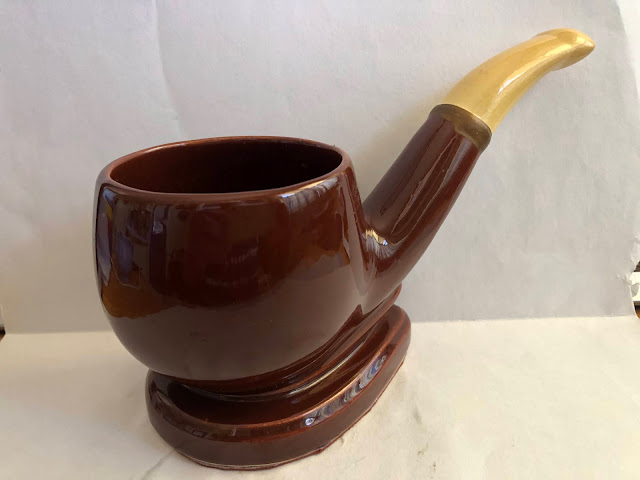 Fences are no obstacles to roses!  This part of the fence is leaning, and the other day the three nasty dogs (I love most dogs, but these three can be unreliable, even vicious) that live, not next door, but the one after that, were growling and fighting together, as usual, and Mickey ran to the fence to see what he could see.  He ended up running right up the leaning fence, and I was just in time to grab one of his hind legs before he fell over the fence!  That neighbor has told me to go ahead and go back there if Mickey gets over, but I'd like to keep that from happening at all.  He (the neighbor) is going to rebuild that part of the fence.  The sooner the better!  I need to speak to him about propping it up, at least. 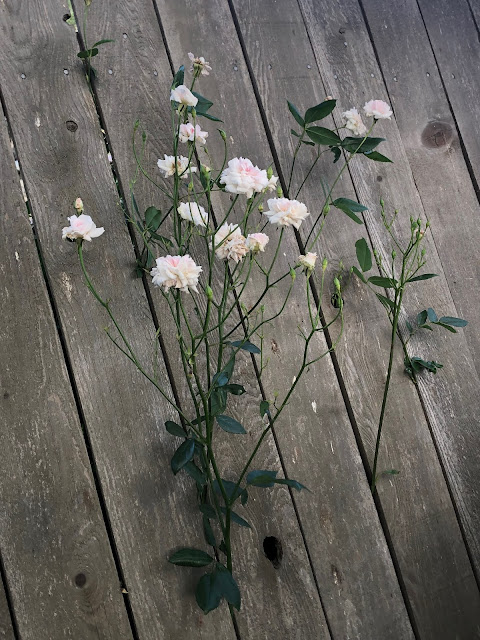 My first strawberry from my new Albion strawberry plants ripened!  There would have been earlier ones, but I did as recommended and removed the first set of flowers.  Small, but then, so are the plants still.  You can't get much rubier than a ripe strawberry!  (Well, actually, rubies aren't quite that red...) 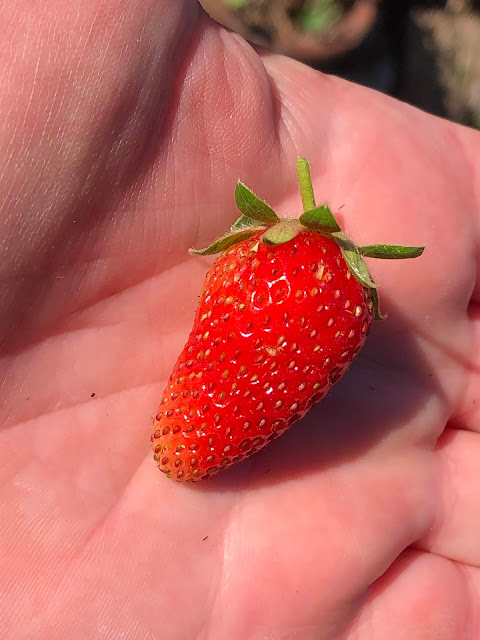 Now that the tomatoes are starting to form fruit I can tell what they are (I lost their labels).  Purple Russian is the only one I grew that is egg shaped, so that's what this is.  So far two of the plants are Purple Russian.  They were free seeds from Baker Creek. 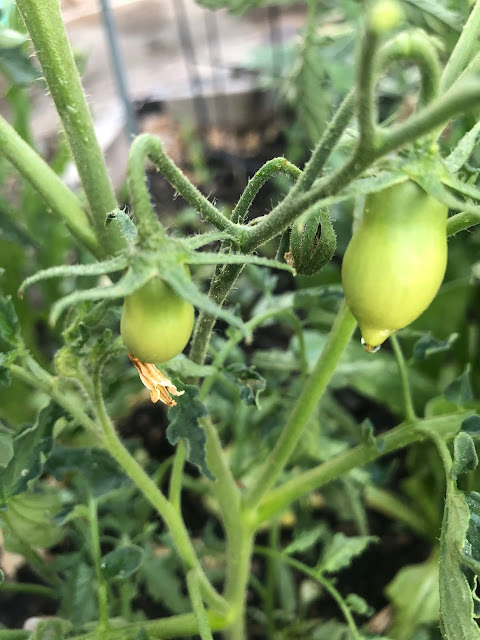 How about this for pretty?  It's my new perennial Bachelor Button "Amethyst Dream."  It's said to grow quickly, and can live up to 25 years.  Do you know why it's called Bachelor Button?  In Victorian times a single man would wear one in his button hole to signify his availability.   I'm not sure what an interested woman was supposed to do about it though. 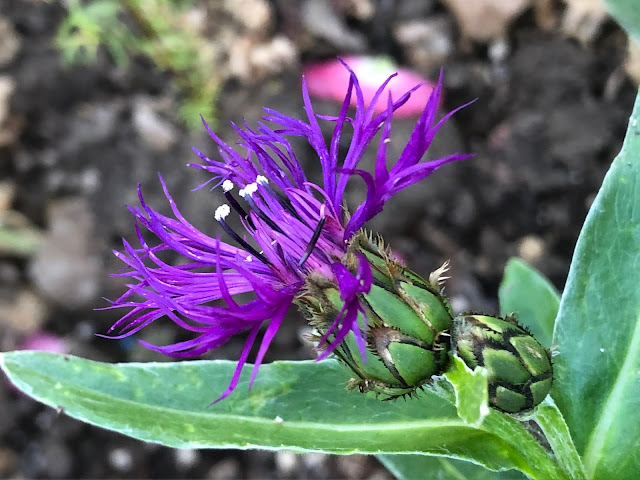 It's going to be a hot day, the forecast is for 97 degrees.  It's 66 right now, so I'm going to take Mickey on a walk before it gets too warm for him.  He hates it when it gets warm!  Goes limp!