There was a yard sale just off my street on Saturday, on a little dead-end street of multiple sales.  In the garage sat a table of old little glass cups.  No... make that toothpick holders!  The seller had received them from a late friend a decade ago, and had finally decided to unbox them and sell them. The sign read $1 each, and that was a good deal.  While browsing the woman lowered the prices to 2/$1.00!  I initially bought 5, telling her I was happy to pay $5, but she forced the change on me. 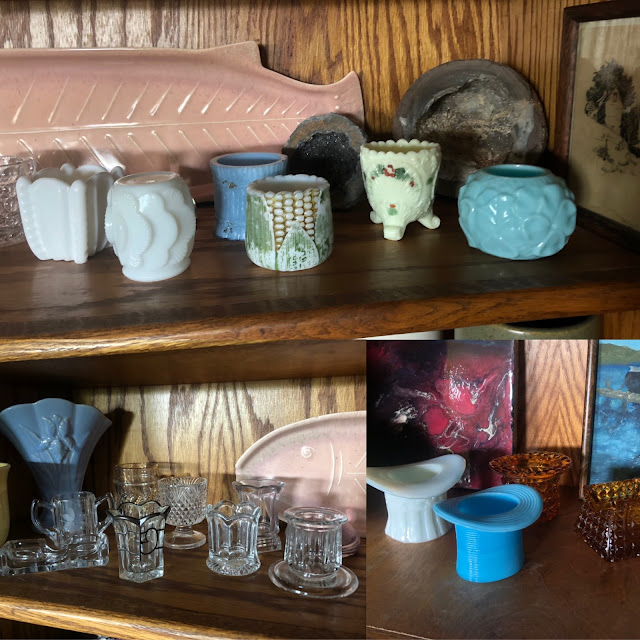 After coming home and researching my purchases, I found them so interesting, and while if not particularly valuable (some do sell for $20 - $50), well worth 2/$1.00.  Plus, they are so durn cute!  Amazing most are chip-free.  I am a breaker, and am always awed by something so breakable and so old being pristine!

So, I went back and bought more!   A lot more!  I am now the proud owner of a toothpick holder collection numbering 19!  18 from the sale, I actually already had one used to hold toothpicks in my kitchen cupboard (now with the collection). 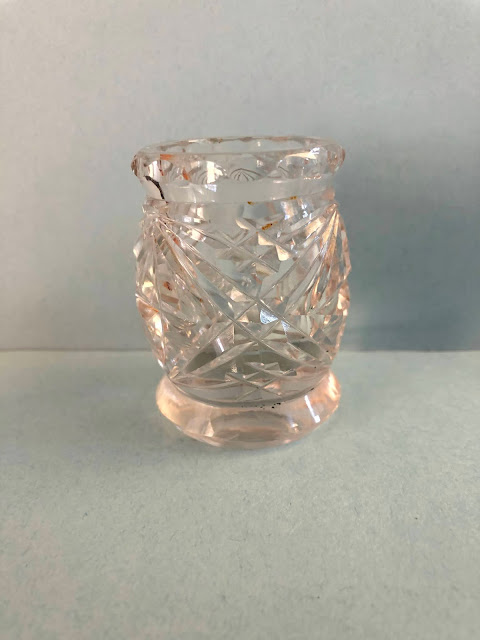 Also, I couldn't resist this Victorian era lead crystal mug, a souvenir of Reading, PA.  I've seen others online that were souvenirs of other PA cities. 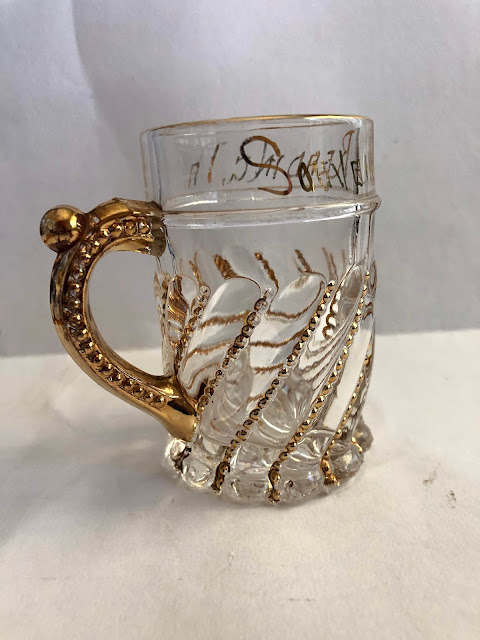 Fortunately for you, I've made collages.  I've only been able to identify about 1/3 (11 of 19 identified by 5-25-21) of them.   Some I find online for sale, but no information as to maker.  Nearly all I've identified are Victorian era (turn of the last century). These clear glass ones aren't really pink, it just looks like it!

The one in the upper right still bore the sticker from an auction reading "Handy Dandy Toothpick $38.00."

Upper left is by Duncan & Miller Glass Company, pattern #54.  The toothpick holders are also known as "Gable," for Clark Gable's ears!  The flower design is cut in.

On the bottom left is "Colonial Stair Step" from Bartlett-Collins Glass, date unknown. 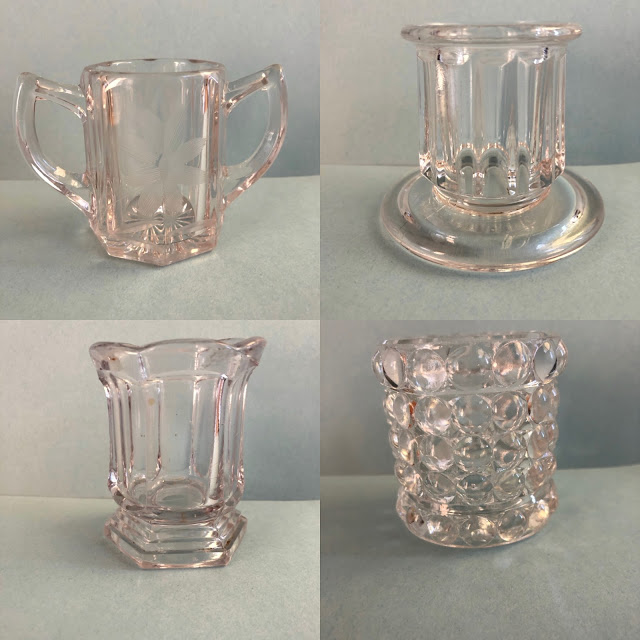 I expected this milk glass corn to be easy to identify, but I haven't been able to yet.

The longer one on the bottom is marked with an H in a diamond, which is Heisey.  It is pattern 353, called Medium Flat Panel, c.1901-1929.  A lot of toothpick holders were part of a complete set of crystal glassware, and part of the well-dressed table of the era.

One of my favorites is in the upper right, a Heisey 351, "Priscilla."  Not all Priscilla has silver overlay, and not all that do are this design, but if I do say so myself, this is the prettiest, rather art nouveau.  Now, that mark was hard to find, the tiny diamond and H lost in the sunburst pattern on the bottom! 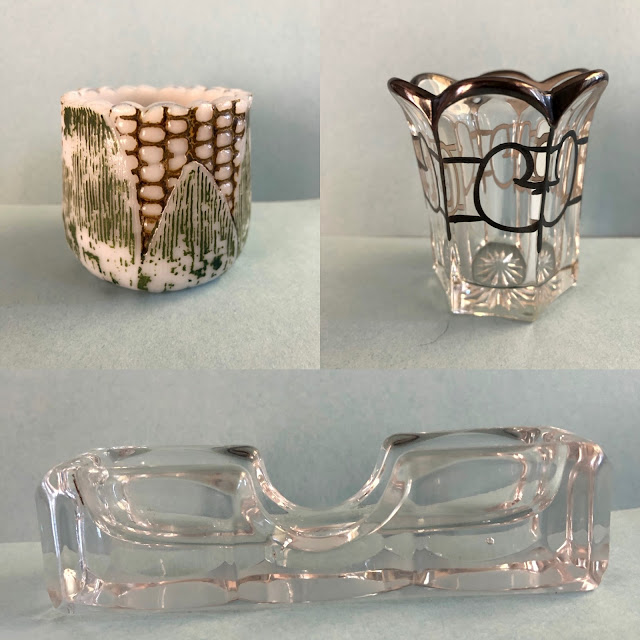 First visit I bypassed the hats.  A bit cutesy for me.  But, I'm glad I reconsidered.  There's an amber glass hobnail, and two milk glass hats.  While I'm still researching them (I love researching, it's fun and I'm pretty good at it!), I came across an interesting piece on the stars and stripes one.  One of them is in the Franklin D. Roosevelt Presidential Library and Museum.  It was a gift to him in 1936, and he kept it on his desk to hold cigarettes to offer visitors.  It became chipped while "in office," but he continued to use it.

The one that looks like an eggcup, but for a very large egg, is Northland "Geneva" custard glass.  Custard glass gets its slight color (custard yellow) from uranium oxide, so, yes, it will glow under a black light!  It would also make a Geiger counter click!  While the amount of uranium is low, it's advised not to use custard glass for food. 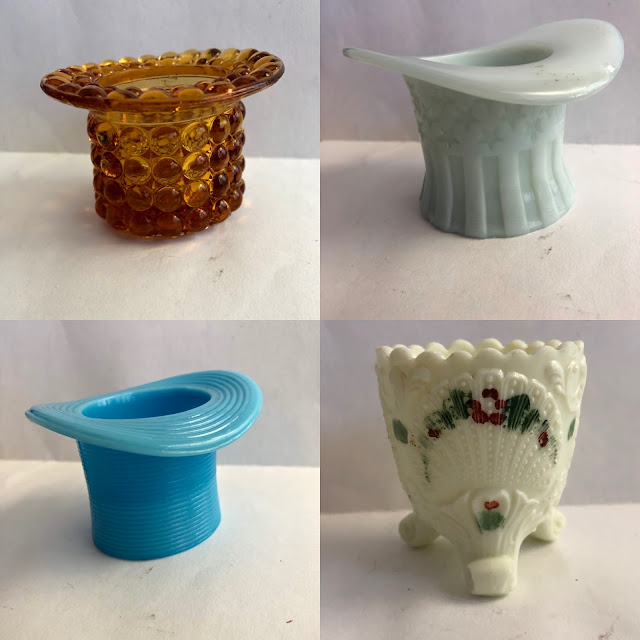 The blue milk glass is Eagle Glass Co. "Fiber Bundle," which is a silly name, I think. I thought it was wheat sheaves, which threw off my search.  The "rope" used to be gilded.  c.1898

The goblet shape in the upper right is Fostoria Americana #444 (Czarina).  It's pressed glass, in three sections, which is one way to identify Fostoria Americana, who nearly always used a 3 part mold.  c.1898-1910

The little one in the bottom right was the one I already had.  I have no idea where it came from, in fact, I have no idea how long I've even had it.  It seems to be one of those household things that always was around! 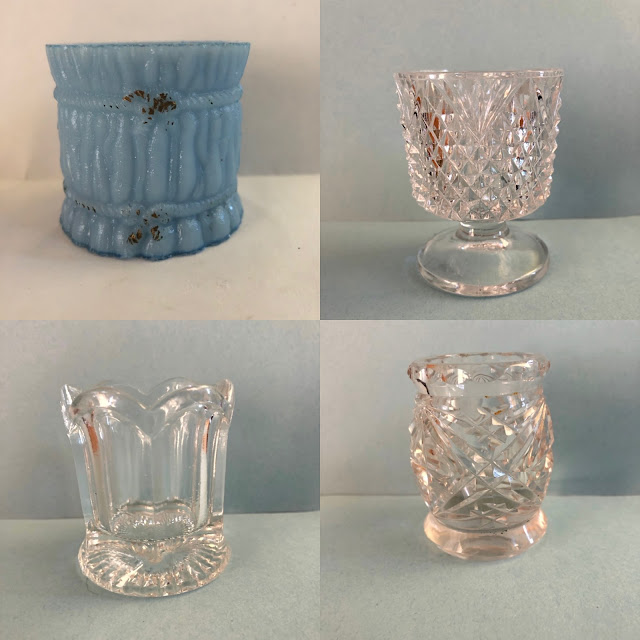 Another of my favorites, in the upper right, is "Orinda," milk glass by the National Glass Co.  c.1901.

On the upper left is another milk glass, Dithridge & Co. "Sunset," pattern No. 50.  c.1894  This is the one with the most noticeable chips, it's a thinner glass.  I read that it's hard to find this particular pattern unchipped.

The beautiful turquoise (one of the original 5) is Consolidated Lamp and Glass Co. "Pansy."  c.1899.

Look at that amber purse!  It is so detailed it even has the clasps on both sides! 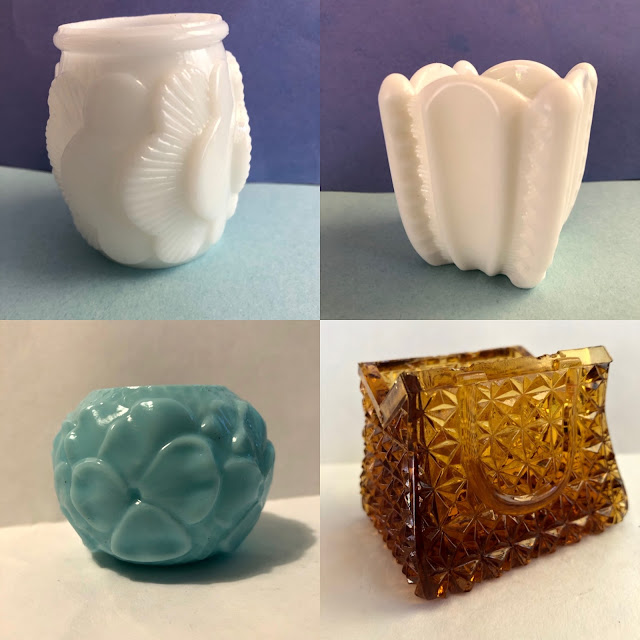 By Sunday morning I'd realized I should have bought others, like the frog pulling the snail shell.  But, alas, the sale was Saturday only.  I'll have to drive by next Saturday and see if she's open again.  Or, perhaps she has a free stuff on the curb today!  If she was selling for 2/$1.00 it wouldn't be surprising, she obviously wanted to get rid of them!

(And, to repeat myself, I do visit other blogs in blog hops, but for the past couple of months have been getting emails that my comments were blocked due to my email.  It isn't always true, I see some of them later, but some are missing.  So, don't think I'm not visiting!  If I join in I do visit others.)