1 - I was notified by email that a bunch of my posts had been flagged and removed for malware or viruses.  They were reinstated the next day, and maybe it was a Blogger error, because, who would bother flagging multiple posts on a gardening blog?  Weird.

2 - It occurred to me (when reading garage sale ads) that no one calls those dead-end streets ending in a circular shape "courts" anymore.  They're all "cul-de-sacs."  How fancy!  The "cul-de-sacs" off the street where I grew up all had court names.  Lincolnshire Court, Westminster Court, Abby Court, etc.  and we called them courts.  The neighborhood kids, even me, played kickball in the end of Lincolnshire.  The one down the street from me is named a "circle," but the residents refer to it as a "cul-de-sac."  Huh... I didn't notice until right now, at 63+ years of age, the courts of my childhood had a name theme.  I'll have to take a trip down memory lane (and Google Maps if my memory fails me) and see what the others were called.

3 - Which reminds me, the Google Street View car was driving around the area a few days ago.  I've seen it before, they must update pretty regularly.

4 - I am behind on my Goodreads Challenge.  Five books behind.  I was behind this time last year, but that was understandable, the libraries were closed.  Now, it's because I got a newer phone, and have my game apps installed again!  Also, the library urges us not to take too long browsing, to get in and out, so the books I've been checking out have been boring, so I don't finish them.  Mostly it's the apps.

5 - The University Extension, Ask an Expert let me down yet again.  I hope the "Master Gardeners" in other counties and states are more knowledgeable and helpful than here.  My Virginia creeper leaves are deformed.  They were last year too, and no flowers, so no berries.  Only the plants in one part of the yard, the others are fine, for now.  I wanted to know what was causing it.  The answer extolled the virtues of Virginia creeper, how to care for it, and just basic pests (things obvious like leaf-hoppers) and things.  Not a word about my deformed leaves. 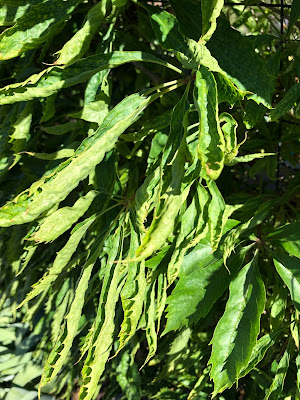 6 - I've been going out back with Mickey early, 6:30am or so, since it's already light then.  I hoped for fresh morning air.  I get next door neighbor cigarette smoke.  They don't smoke in their house.  They shouldn't smoke at all, he'd had a stroke last year.  They're nice people and are in their own yard.  Still, it keeps me from fully enjoying mine!

7 - Yesterday was an exciting day.  I went to a thrift store FOR THE FIRST TIME IN MORE THAN A YEAR!   Their stock seems a bit low, but guess what I found?  A glass hat toothpick holder!   Fostoria "American Clear," date unknown since the pattern was made 1915-1982. I wonder if they made toothpick holders for that long though, they lost fashion long before 1982. 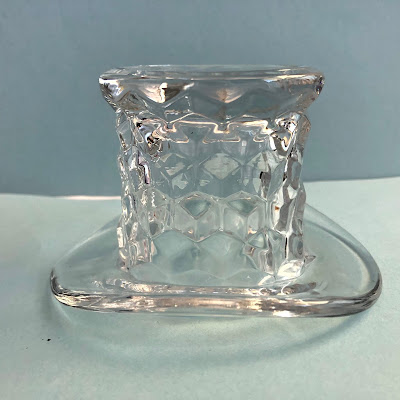 8 - The other day I posted a photo of a beautiful edible weed, salsify.  I mentioned how mine gets covered with little black aphids.  Here they are...  Now I think I ought to find out what kind of aphids they are. 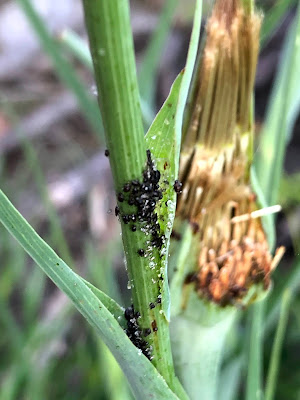 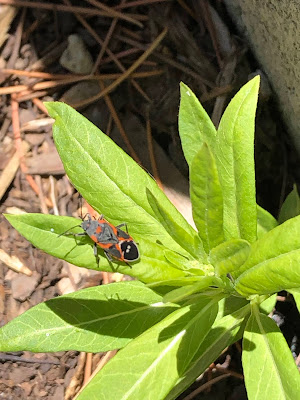 10 - A scrub jay took a bath and Mickey had to check out "his" water afterwards.

The nerve of that bird, bathing in the water and standing on the wood!  Apparently scrub jays have a strong odor they leave behind!  I guess it did need a bath. 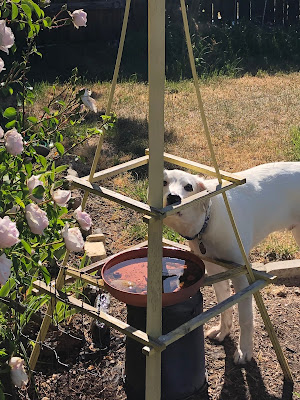 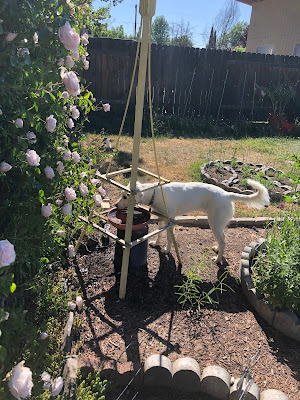 11 - I burnt dinner last night by turning the wrong burner on high.  The house filled with smoke, which panicked Mickey; he shook and needed to be held.  For some reason all cooking odors, and smoke, end up in my bedroom.  Fun.

12 - I love the native Wild Grape volunteers.  Fortunately, this one came up next to the fence. It outgrew the trellis (I wish I could get the trellis back out of there!), so I used twine and cable staples to make a large area for the vines to grab.  It hasn't ever had grapes, but it might not be old enough yet.  It's also called Pacific Grape, or California Wild Grape.  Vitis californica. 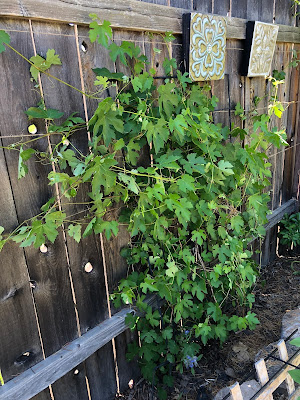 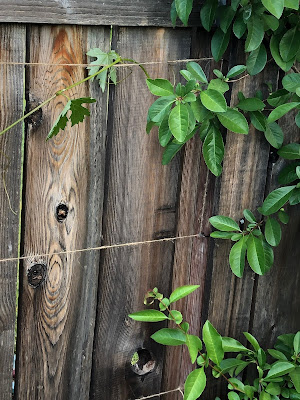 13 -I moved those metal decorative squares off the fence while I worked.  Thought there was an old paper wasp nest behind one, but it turns out they both had active paper wasp nests behind them! 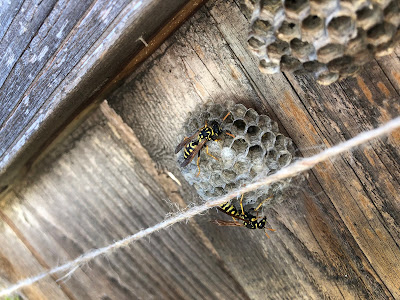 That's my Thursday Thirteen.  Where are yours?  I'm a bit wordy, but anything goes!