Hit a Jackpot at the Thrift Store

It was a nice day at St. Vincent de Paul thrift store last week.  I hit the jackpot!  But, a "jackpot" is in the eye of the beholder, so these may not thrill you the way I was thrilled!

First: can you believe I found TWO toothpick holders?  Have they been selling them so often and I didn't even know?  Probably.

This one is interesting, as it comes with the base in two finishes.  Mine is smooth, so a toothpick holder.  Others have a rough base, to strike matches, so match holders.  Some were sold with a lid, but apparently not all of them were.  With a lid they couldn't be either a match holder or a toothpick holder, so the use is unknown.  It is made by Bryce, Higbee & Co. and the original name was Mortar, but because there is another toothpick holder called Mortar, this one is known by its collector name, Gatling Gun.  It's date isn't known, but the glass factory was destroyed by a flood in 1907, so it has to predate that. $2.00 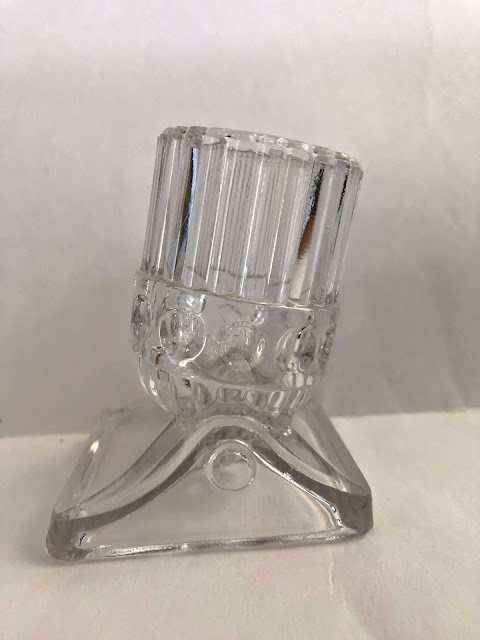 Then, this three handled, with a pretty pressed glass tulip design, unknown origin.  $2.25 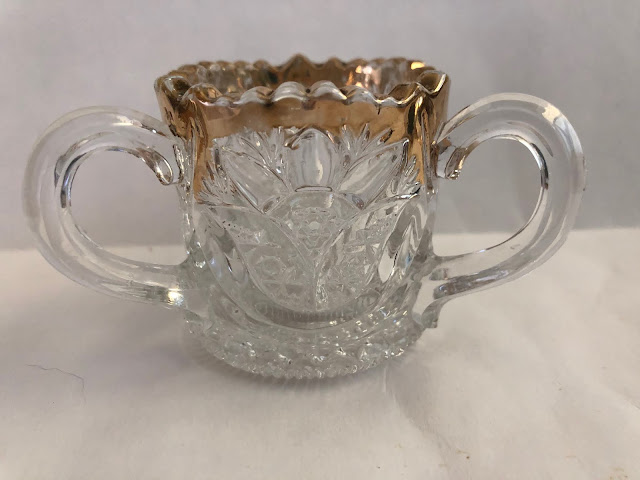 I haven't even discovered what this is yet.  It's hard to see here, but the bottom half is glass, and I believe the top half is aluminum.  It's marked " MADE IN U.S.A." on the bottom.  $1.00 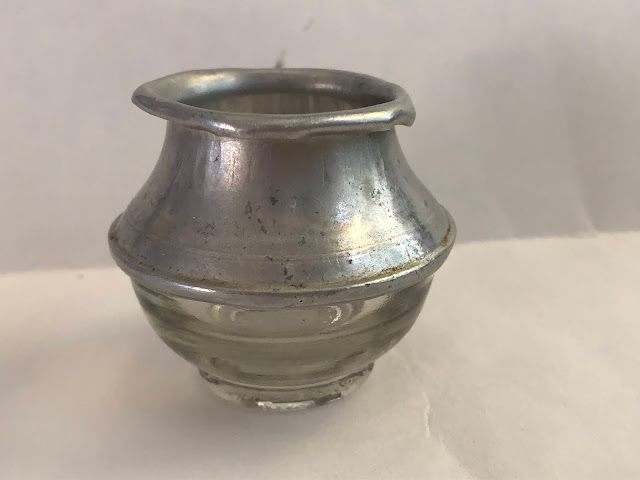 This is was made in Germany, with the number 9433 pressed into the bottom.  Actually it's so small (just 2" tall) Germany is broken up into GER MANY on two lines!  I haven't located another online made in Germany, but in the 1950s the same vase and man's figure was produced in Japan, in a lower quality, the mold used was less detailed, less sharp.  Mine is probably heavier too, as the base of the Japanese ones are hollow, and this is solid, no hole.  The Japanese version was also in a woman's form, so most likely the German was too.  These are usually listed as toothpick holders, but I disagree.  The lines on the sides of where the gentleman has his feet are for striking matches.  You could use it as a toothpick holder of course!  I'll be on the look out for his lady counterpart!  $2.75 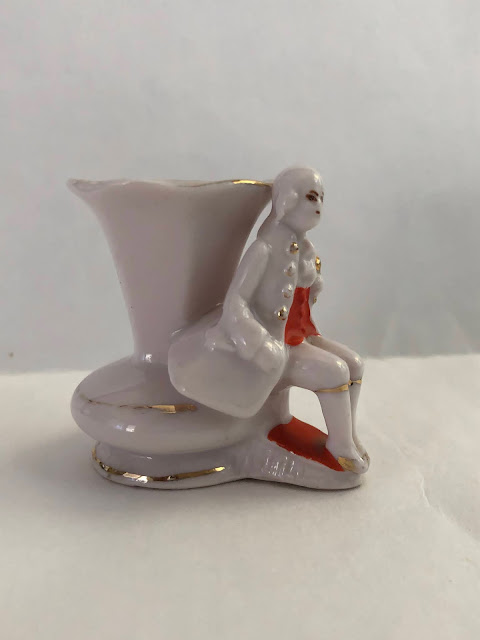 I thought this napkin ring was too cute to pass up!  I don't use them, but it's a quirky kitchen decor item.  $1.25 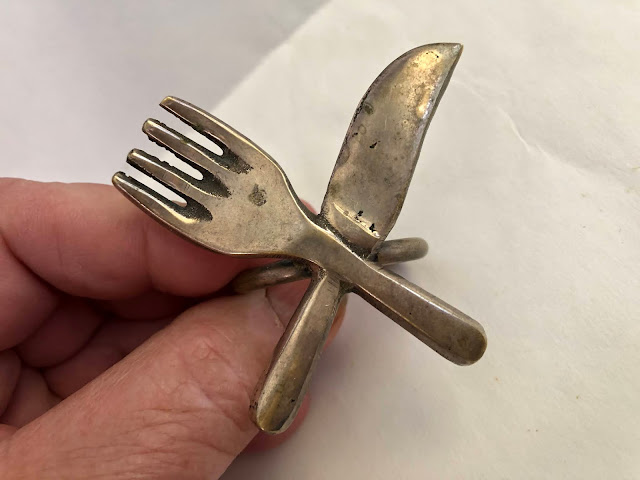 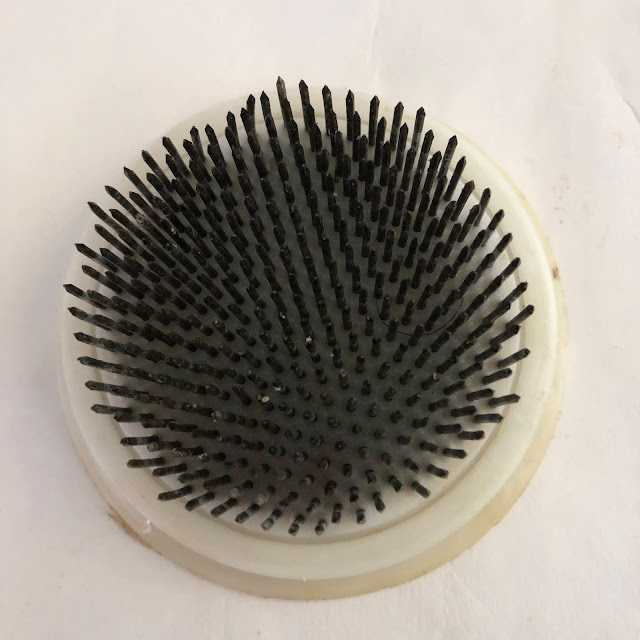 But, take a look at this terrific flower frog!  It's from Hidden Cove Pottery, Bainbridge Island, WA.  The company doesn't seem to have an online presence, no website, Facebook, etc.  It's called Japanese Maple and copyrighted 2006 Day.  It was my big purchase of the day at $4.50. 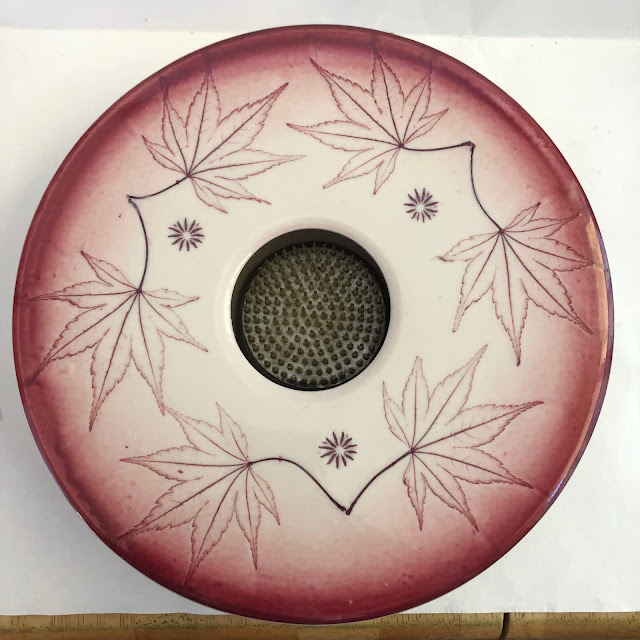 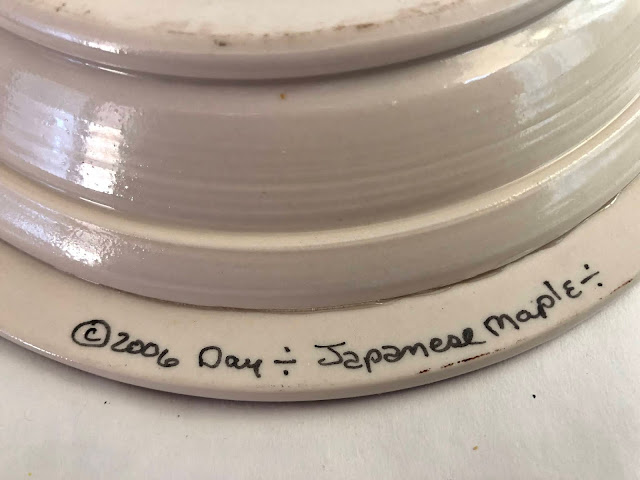 Oh, and a little terra-cotta pot for 50 cents!  I rarely pass up terra-cotta pots.  I have a shelf of them in the shed.  Even if I don't use them all, I like their look. 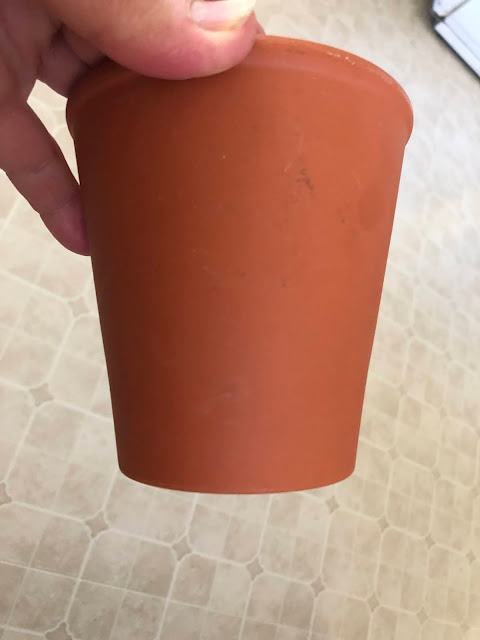