Finally got my rockroses!

My rockroses for the front yard arrived!  They came wrapped in plastic wrap, which I assume was to keep the soil moister than if they came in a pot.  Also, it's lighter, so lower shipping costs.

I planted them in front where the ugly barberry and ground covering juniper were when I moved in.
There are two rockroses (Lasithi and Jessamy Beauty), a Munstead lavender, Golden Oregano, and Tuscan blue rosemary. The rockroses are both low growing.  Since they don't need much water once established I added in the herbs that have similar water needs, as well as low growing. 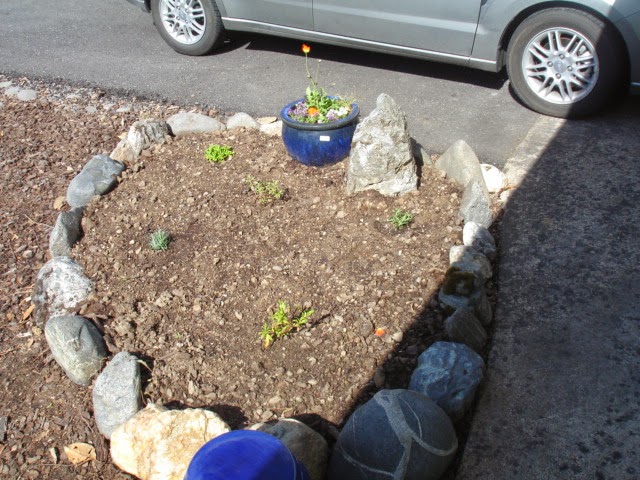 The FFA (Future Farmers of America) at Crater High School in Central Point had their annual plant sale this weekend.  I went yesterday and got this (less the hanging basket, which was from Winco for only $3.88!  I got three of them.)... 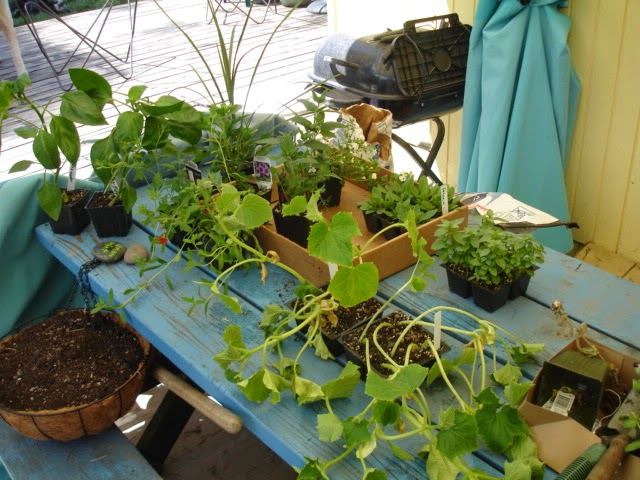 2 - four packs of lemon cucumbers.  This is where I always get my lemon cucumbers.  I tried growing my own, but they always die.
2 - bell peppers, a California Wonder and a Golden Wonder.  It's cold for them right now, but it is supposed to warm up considerably in a few days.  Peppers love heat.
1 - four pack of basil
Lots of flowers - "Million Bells" or calibrachoa, verbena, bacopa (sutera cordata), African daisy, wave petunias (I am not a petunia fan, but these do look nice in hanging baskets, and I just mentioned, I bought three!)
...and a dracaena.  I liked it's looks!
All these gems came to under $20.00.  I love those Future Farmers!

It's cold and wet, but I planted anyway.  The plants were used to a cozy warm greenhouse, so they must be very shocked to be in my yard now.  I was in Ashland this morning, and there was snow on the foothills!  Snow! We do need the water, but snow in nearly mid-May?  I want spring back, and I think we are going to jump right into summer.

I dropped by Walmart this morning for a new little fan for my bedroom, and found this wonderful bargain...  and yes, I do need another ceramic planter!  Well, maybe "need" is the wrong word, but I wanted it, and it was less than half what they usually cost.  Maybe I can find a place for it in front.

Speaking of front, my new windows are being installed this Wednesday and Thursday!  They weren't cheap, but I did actually need the front two, one of which was the most expensive.  So, I went ahead and ordered new ones all around, which is actually only six.  Milgard Tuscany with prairie grids.

The front looks better already since we tore out the junipers. 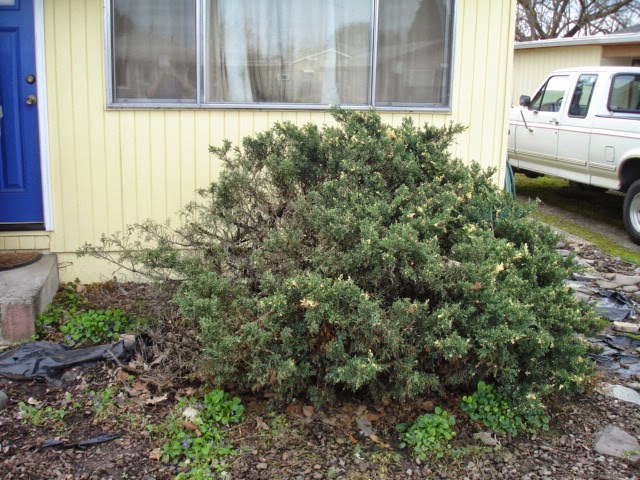 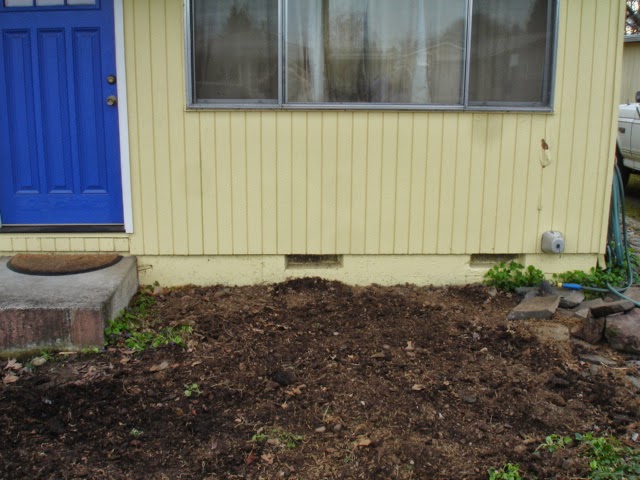 And I'll lose that icky mildewed, cat hair filled drapery when the new windows go in!  I have to get the painter back to repair those damaged areas where water formed bubbles under the window.  Then I can plant this area.  At first I planned iris, but now I am thinking lavender.  I have plans for a handrail in front of the step.  Isn't my front door pretty?  I love it!  All the greenery in the photo are wild violets. They are cute and pretty, but grow just like weeds.